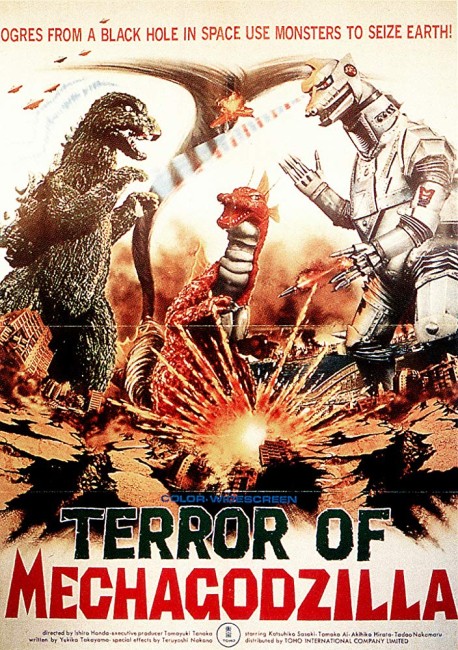 aka Escape of Mecha-Godzilla; Monsters From an Unknown Planet; The Terror of GodzIlla

Space aliens from the Third Planet want to raze Tokyo to build their own city. They approach the reclusive and embittered Professor Shiziru Mafune who wants to see Tokyo razed as well because his theories about dinosaurs were ridiculed. By turning Mafune’s daughter Tetsura into a cyborg, the aliens force him to help rebuild Mecha-Godzilla and then unleash it and Titanosurus, a dinosaur that Mafune has discovered, against Tokyo. It is up to Godzilla to defend Japan against this menace.

Terror of Mechagodzilla was the fifteenth Godzilla film. It was the last of the classic Godzilla films – after this the series went into retirement for nearly a decade before Godzilla was revived with a new series of films, all made with much better effects, beginning with Godzilla 1985 (1984).

Terror of Mechagodzilla was the final film (at least final credited film) for director Ishiro Honda who had created the very first Godzilla film and directed all but two entries throughout the 1960s. After Honda’s seeming retirement following Godzilla’s Revenge (1969), director Jun Fukuda took the series in increasingly sillier and more juvenile directions. Honda returned for this one last film, a direct followup to Fukuda’s Godzilla vs the Cosmic Monster (1974), wherein he showed just how a Godzilla film should be done and in fact turned out the best Godzilla film of the 1970s.

The plot is difficult to follow – we are not exactly sure who half the characters are or what side they are on. You have to put up with this. However, in the last third of the film Ishiro Honda pulls all the stops out for one of the best destruction climaxes in any classic Godzilla film. There are some highly entertaining scenes of the monsters battering one another around, Godzilla ripping Mecha-Godzilla’s head off and it still fighting on, it firing rockets. Honda gives Godzilla a great entrance, all lit up in flashes of lightning and the camera panning around the buildings to face him as he squares off with Titanosaurus. And there are some fabulous effects shots panning up the length of Mecha-Godzilla towering over the workshop as it is worked on. There aren’t any cute kids, the special effects are the best they ever managed to get in any classic Godzilla film and, unlike Jun Fukuda, Ishiro Honda treats the entire show seriously.