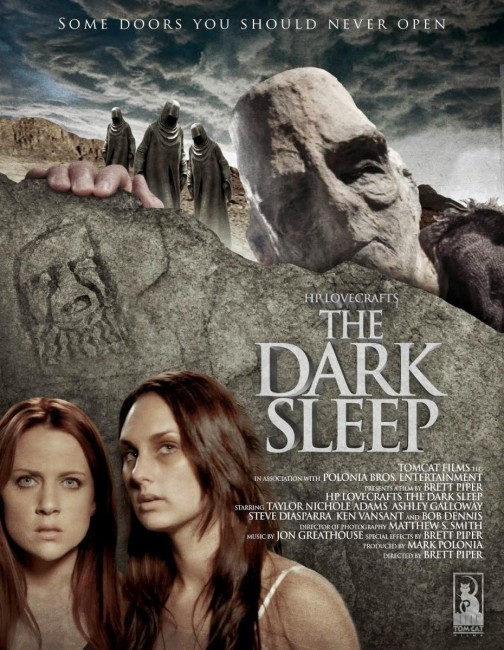 Writer Nancy Peterson persuades her ex-husband Bob, a realtor, to give her one of his homes in lieu of a divorce settlement. One of the conditions of her taking the house is that she does not remove or deface an occult painting on the wall of the cellar. Nancy moves in but soon starts having unsettling dreams of being in a different world. A strange rat-like creature appears on her bed, although the exterminators can find nothing when she brings them in. Her sister Kelly introduces her to physicist Walter Gilman who talks about occult rituals that open the way to other dimensions ruled over by Nyarlathotep, which can be accessed through dream. In one of the dreams, Nancy stabs and kills Kelly as she attacks her only to wake and find that she has erased all existence of Kelly. The only hope would be for her to return to the other dimension and rescue Kelly.

The other prominent name on the credits is that of Mark Polonia. Since the 1980s, Mark and his late twin brother John have churned out more than fifty films on incredibly low budgets. Titles reviewed here include Bigfoot vs Zombies (2016) and Amityville Exorcism (2017). Mark Polonia has produced all of Brett Piper’s films since Muckman, while Piper has delivered effects on several of Polonia’s films. Mark Polonia also plays the role of one of two rat exterminators where between them, he and Bob Dennis give performances that make the two of them look imbecilic.

The screen credits note ‘Additional Material from The Dreams in the Witch House by H.P. Lovecraft’, which seems to suggest that the film maybe borrowed one or two ideas from the Lovecraft short story, which was published in 1933, and that all the rest is original material. In fact, the credit should read ‘Based on The Dreams in the Witch House by H.P. Lovecraft’ as what we have is a straight adaptation. The Lovecraft story had a student renting a room in a house with strange geometry and having dreams that take him into another dimension where he fights a former Salem witch and her acolytes. The witch has been dropped in the film but about the only parts that do not come from the story are Nancy’s ex-husband, the exterminators and the character of the sister and her erasure.

As might be expected, The Dark Sleep has been made cheaply. On the other hand, I found it far more engaging than I expected it to be, In particular, the scenes when Ashley Galloway enters into the other dimension has something of the uncanny atmosphere that Lovecraft captured – she walking across an alien plain, finding a strange mountain path with an iron grille, and then being shot at by a tripod machine, fighting off skeletal alien birds and being pursued by a monster. There is some not bad stop motion animation of the Brown Jacob entity and the effects overall are far better than one expected either of Brett Piper and a Mark Polonia film. The film even gets in a reference to the Zuni idol from Trilogy of Terror (1975).

One of the more imaginative scenes is where Ashley Galloway is in the dream, wakes up as sister Taylor Nicole Adams starts trying to kiss her and then defends herself by stabbing and killing Taylor Nicole with a kitchen knife. This all turns out to be a dream and Ashley wakes up only to discover that because she killed Taylor Nicole in the dream Taylor’s entire existence has been erased – she has disappeared from the phone contact list, her boyfriend has no knowledge of her, and most eerily Ashley calls her mother only to be told that she has no sister.

The end arrived at with the revelation that the demon at the centre of everything is a very human figure is a more regular psychological explanation than H.P. Lovecraft ever opted for – he instead preferring occult and cosmic menaces with little spent dwelling on the complexities of the human mind. Nevertheless, what we have is a better work than anything one expected it to be at the outset.