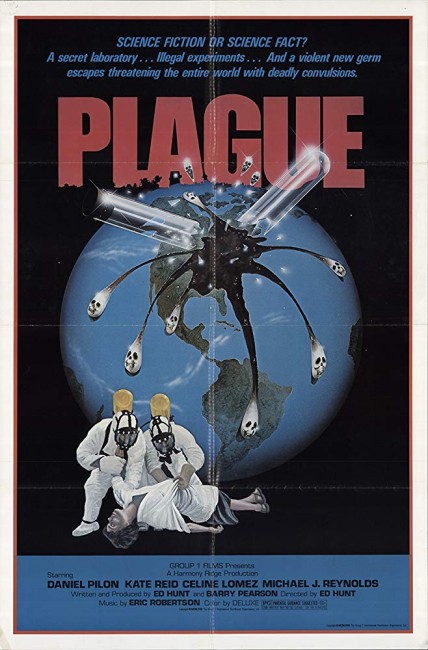 aka M3: The Gemini Strain

At the McNaughton Research Laboratory, Dr Celia Graham, tired of waiting for overly cautious bureaucracy to give official sanction for her experiments, develops a strain of mutated M3 bacteria. However, the M3 strain proves deadly and kills her, before spreading into the outside world via the lab’s faulty ventilation system. Her colleague Dr Bill Fuller works around the clock to perfect an antidote, while authorities make all effort to stop the infection spreading. However, one woman, who is infected but unaffected, escapes custody, spreading contagion wherever she goes.

Plague, also known as M3: The Gemini Strain, is a Canadian-made plague outbreak thriller. It comes from Ed Hunt, a minor American-born director responsible for several genre entries including the evil children slasher film Bloody Birthday (1981), the tongue-in-cheek The Brain (1988) and whose most well known work was the entertaining Starship Invasions (1977).

As an entry in the outbreak genre, Plague is singularly dull. Ed Hunt goes through most of the cliches – the virus’s accidental escape from the lab, the imposition of martial law, the Typhoid Mary carrier who travels through the countryside spreading contagion, the countdown to finding the cure. However, Hunt fails to offer any new and original treatment of the themes. As director, he fails to generate any suspense – mostly the film consists of people sitting around and talking in offices, something that proves incredibly dreary.

What also strikes one is how shabby the research facility’s safety protocols are, clearly a case of the film not having done its homework (and also probably not having the budget) – the door to the test lab is an ordinary door without any airlock seal; the scientists handle dangerous materials with their bare hands; people shut off power measures – thus safety procedures – without even looking to see if the lab is occupied or whether doing so would cause any damage. You could have probably made a more interesting film out of the possibility of deadly infectious materials escaping the lab due to improper safety precautions rather than simply climbing aboard the cliched moral high horse that the film does about scientists being too reckless with their experiments.