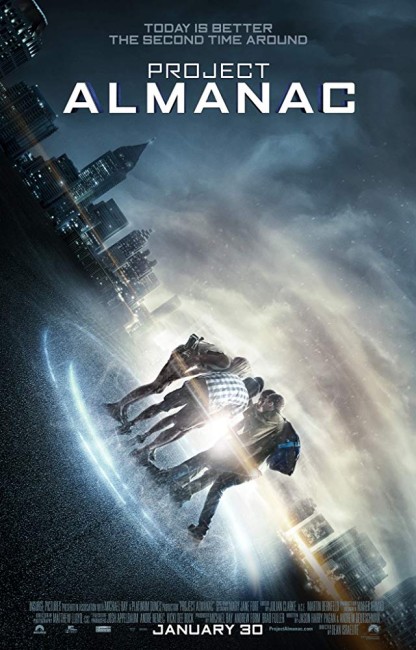 In Atlanta, Georgia, teenager David Raskin is accepted into M.I.T. on the basis of a drone project he has built but is disappointed when he does not receive the scholarship he wanted. Delving around in the attic, he finds a bunch of junk left by his inventor father who died when David was seven. He discovers an old video recorder and is startled when he plays the recording of his seventh birthday party and sees his present-day self walking through the background. He and his friends realise that his father must have constructed a time machine. They find the plans in the basement and set to building it. Joined by Jessie, the girl David is attracted to, they begin a series of experiments in time travel. Travelling back, they set about doing things like acing tests they previously failed and returning with the winning lottery numbers. After they travel back to visit a music festival and David blows the chance to get with Jessie, he makes an unauthorised trip back in time on his own to remedy the situation. He ends up with Jessie but finds that changing the past has had catastrophic ripple effects that, along with his efforts to set things right, are causing more extreme changes every time he goes back.

The prospects for Project Almanac seemed uncertain. The trailer that first screened in theatres in mid-2014 seemed intriguing – only for the film to be yanked from its announced schedule. It was shuffled around under several different names and finally dumped in theatres at the end of January 2015, mid-winter in North America and traditionally the time that studios get rid of films that they have little faith in being successful, none of which seemed hopeful. It was also a co-production of Michael Bay’s Platinum Dunes company, which has mostly been founded on a series of disappointing remakes of 1970s/80s films, including the likes of The Texas Chainsaw Massacre (2003), The Amityville Horror (2005), The Hitcher (2007), Friday the 13th (2009), A Nightmare on Elm Street (2010), Teenage Mutant Ninja Turtles (2014) and several original films, but has failed to yet turn out a decent film. The wide release poster – where you had to tilt your head to an angle to see what was happening – seemed uninspiring and told nothing about the film.

All I can say is that I ended up being presently surprised with Project Almanac. Platinum Dunes defy expectation for once. The only reason for the studio’s cold feet, you suspect, has something to do with their not knowing how to deal with an intelligent film. Despite the eventual decision to pitch Project Almanac to a teen audience, it quickly becomes apparent that this is not any ordinary teen film. There is some pandering to this in the probably overlong scenes featuring a trip to the music festival but mostly it is a film where the teenagers are bright and highly intelligent rather than clowns, jocks or dumbed down for audience appeal. Their dialogue comes with a wry wit and in the case of lead Jonny Weston, he has both intelligence and good-looking charisma. You might want to contrast this to Earth to Echo (2014), another Found footage film that featured supposedly bright kids or perhaps even more closely Clockstoppers (2002), to see just how this could have not worked.

The film becomes even more fascinating when it starts to unveil its science-fictional elements – of them puzzling over seeing Jonny Weston in the background of the video; and especially the scenes where they start trying out the device and eerily end up with metal objects floating in mid-air, liquids creating strange whirlpools, the toy car sent back through time found impacted inside a wall or hammers and chisels fused together. (Although, if that was the results one was getting, I don’t know if I would be so quick about immediately jumping into experimenting with live subjects ie. themselves straight away).

If you wanted a soundbite description to compare Project Almanac, you could call it a version of Primer (2003) by way of Chronicle (2012) with its videocamera toting kids discovering an object that grants amazing abilities before also discovering that there are dark consequences. One also kept being reminded from the kids from Explorers (1985), albeit on a few years after puberty had hit. There are all the requisite in-references and comments on other time travel films such as The Terminator (1984) and Terminator 2: Judgment Day (1991), Timecop (1994), Looper (2012) and tv’s Doctor Who (1963-89, 2005– ), while we also see the kids watching Bill and Ted’s Excellent Adventure (1989) on their laptop in one scene. There are even jokes made about Argo (2012).

The best parts of the film come towards the end when we start seeing some of the ripple effects from their continued journeys back through time – posters for a missing dog around the neighbourhood, David’s previously unemployed mother suddenly with a job and then the spiralling disaster of Jonny Weston’s solo journey back to the festival resulting in plane crashes, people with broken legs causing the basketball team to lose, teacher’s dismissed, Allen Evangelista in critical condition in hospital. I would have liked to have seen more of how the journeys back ended up causally creating these events but the film works perfectly well without them, creating a world of frightening possibilities. I especially liked the scene where Jonny Weston goes back to the festival, gets together with Sofia Black D’Elia and then returns home to a relationship he has no memory of, something that films like Back to the Future (1985) and Timceop both omitted as being the consequences of editing the past and then having characters return to slot into present day lives that they by implication have never lived.

You do end up quibbling about some of the film’s time travel logic though. The biggest hole for me was the scene with Sam Lerner repeatedly going back in order to ace the chemistry test and outsmart every question the teacher throws at him. We see the group travelling back about four times to do so. The problem with this is the logic of what is happening. Consider this – you have the same set of people making four trips back to the same moment in time, each group coming from slightly further into the future. What this should have ended up with was one classroom scene where you have four sets of the same people all bumping into and encountering each other in the hallway at the same time (and the film tells us exactly what happens when people cross their own timeline). The film does nothing to explain how travelling back to the same moment in time from further in the future negates all the preceding journeys back to the same moment. Yet later on, the script contradicts itself when it comes to the lottery scene and having them realise they neglected to get the bonus number but cannot change things – why by the same logic could they not go back, get that number and then return to negate their first visit by winning the whole amount this time?

After making his directorial debut here, Dean Israelite subsequently went on to direct the reboot of Power Rangers (2017).