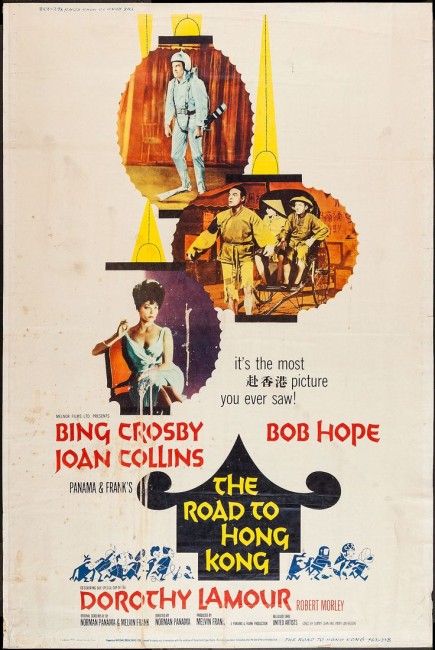 Harry Turner and Chester Babcock are two conmen running a scam in Calcutta involving a fake backpack flying machine. Chester is injured trying out the machine and loses his memory. The only hope is to go to a lamasery, which offers a medicinal treatment that retrieves memory. When they find that the serum allows perfect recall, they abscond with a vial, hoping to use it in a variety act. While trying it out, Chester accidentally memorises a secret rocket fuel formula that has been mistakenly given to him by a spy courier Diane. As she tries to get it back, Chester and Harry are abducted by the spy organisation The Third Echelon, whose leader decides to use them as test subjects in an experimental Moon rocket launch.

Despite it being a decade before they had had made their previous Road movie, The Road to Hong Kong is arguably one of the best of the series. The only move with the times is to allow the knockabout comedy to be shaped by the James Bond spy film (something that pushes The Road to Hong Kong over into being science-fiction). Hope and Crosby are on great form – there are some hilarious slapstick gags with the two caught in an automatic scratching and banana feeding machine designed for monkeys. There is a thoroughly surreal stage number where Bob Hope does a Chinese number with Dorothy Lamour and fish keep popping out of his mandarin robes.

In some ways, The Road to Hong Kong is both a nostalgia for the good old days and the opportunity for Hope and Crosby to go completely crazy. They pack in cameos from everyone from Dean Martin and Frank Sinatra, Zsa Zsa Gabor, David Niven, and an hilarious, mercilessly paced sequence with an uncredited Peter Sellers as an Indian doctor.

There are more meta-fictional gags than in the previous films – from an opening number that winds in reference to all the other films and has the two joking with each other about whose name should be the biggest on the billboard sign. They even engage in a number of self-deflating putdowns: “I’ve got to hide you,” Dorothy Lamour announces. “From the killers?” “No, the critics.” Earlier, the two encounter a shark: “Don’t worry they don’t eat people.” “What about actors?” “We’re safe.” Enjoyably silly fun.