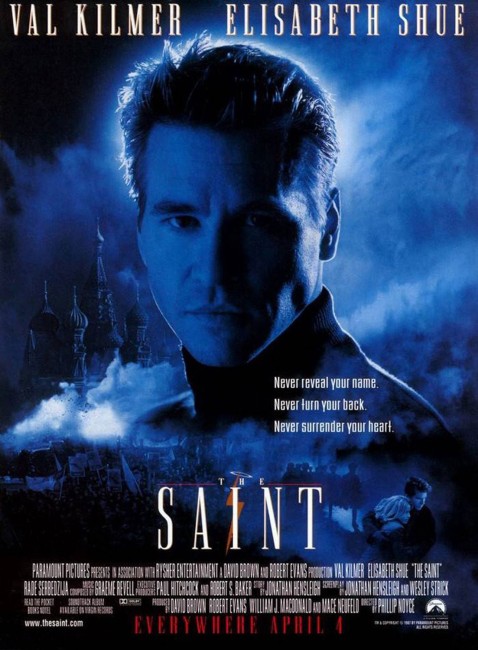 Simon Templar is an international thief and a master of disguise. After he steals a computer chip from the Tretiak Oil and Gas Company in Moscow, company head Ivan Tretiak hires Templar to steal a formula for cold fusion from Dr Emma Russell at Cambridge University. Templar seduces Dr Russell in order to do so. However, after stealing the formula, Templar finds it is incomplete and useless. Tretiak attempts first to kill and then have Templar arrested. Templar teams up with Elizabeth, where they discover that Tretiak is making plans to sell the useless formula to the Russian president who is desperate to solve Moscow’s heating crisis (which has secretly been masterminded by Tretiak).

In the case of The Saint, the connection between the tv series and the film was even more spurious than usual in that the only thing the film has to do with the original tv series is the name of the show and the central character. Although, in the case of The Saint, such a criticism of straying from the source material is a less severe one than other examples in the big screen tv remakes fad such as Mission: Impossible. Neither the Roger Moore tv series or the Ian Ogilvy tv series Return of the Saint (1978-9) had much to do with the original Leslie Charteris novels.

In fact, unlike other characters such as Sherlock Holmes, James Bond and Mike Hammer that have undergone multiple media incarnations, the character of the Saint lacks specificity. The Saint is only a name, with the character in various adaptations having served as everything from a PI to a spy to a playboy adventurer or, as here, an international thief. Leslie Charteris admitted that his conception of the character of the Saint was always shifting throughout the books, while he remained vague and gave away almost nothing about Templar’s background.

Leslie Charteris wrote some 50 Saint novels and twelve short story collections from the character’s first appearance in 1928 up until Charteris’s death in 1993. The character appeared in numerous media, including a radio series that lasted between 1940 and 1951 (which had Vincent Price voicing the role in the American version), several comic-book incarnations, even his own magazine The Saint Detective Magazine (1953-67) and a bubblegum card series. There were nine Saint B films in the 1940s starring principally George Sanders, two French films that Leslie Charteris disowned and then four tv incarnations – the well-remembered The Saint (1962-9) with Roger Moore; a one-hour tv pilot The Saint in Manhattan (1987) starring Australian actor Andrew Clarke; The Return of the Saint (1978-9) with Ian Ogilvy; and a series of six made-for-tv movies in the late 1980s with Simon Dutton. A number of two-part episodes from the Roger Moore and Ian Ogilvy series’ have also been repackaged as tv movies.

After numerous big-name stars were touted in the film role, Val Kilmer was finally cast but proves only so-so as Simon Templar. The makeup jobs in his various disguises are sometimes clever – unfortunately, most of these are reliant on placing Kilmer into a wig, the dodginess of which is only matched by the shakiness of the accents he attempts to affect. The romantic element is a surprisingly strong feature of the film but whenever Kilmer starts in with a South African accent that sounds more like it comes from Ireland, it reduces the earnestness of the romance to unintentional laughter.

At best, Val Kilmer is a merely adequate actor, at worst wooden, but here he lacks the mysteriousness and guile the part requires. Kilmer is perhaps a little more expressive than usual but ultimately he is never much more than a series of pretty boy poses – the role as written here needs someone like an Antonio Banderas or a George Clooney (both of whom were once mentioned in the part) who would be capable of radiating a charismatic mysteriousness and a mercurial dangerousness in their on-screen personae.

In the director’s chair is Australian Phillip Noyce. Phillip Noyce emerged with the fine psycho-thriller Dead Calm (1989), before entering the American mainstream with mostly routine works like Patriot Games (1992), Sliver (1993), Clear and Present Danger (1994), The Bone Collector (1999), Salt (2010) and The Giver (2014). Noyce is a journeyman director but at least sustains the suspense well here. The love story at the centre manages to keep the film going despite being deadwood on Val Kilmer’s part.

In other respects, particularly the techno-thriller element that allows The Saint to be included here as science-fiction, the film sinks. The script has only the most rudimentary idea of what cold fusion is. Elisabeth Shue’s description of what it is meant to be gives the impression of an overly effusive person trying to explain something after one drink too many. Also amusing is the note of Spielbergian transcendence that the final revelation of the working device is portrayed on. Phillip Noyce interestingly chooses to shoot on location in a post-Soviet Moscow. Unfortunately, this proves to be a far less interestingly exotic location than it may have seemed on paper. On screen, Moscow appears drab and rundown – as though someone has gone and shot in the poorer areas of say Edinburgh or Pittsburgh.

The Saint (2016) was the pilot for a new tv series starring Adam Rayner as Simon Templar but failed to go beyond the initial tv movie.