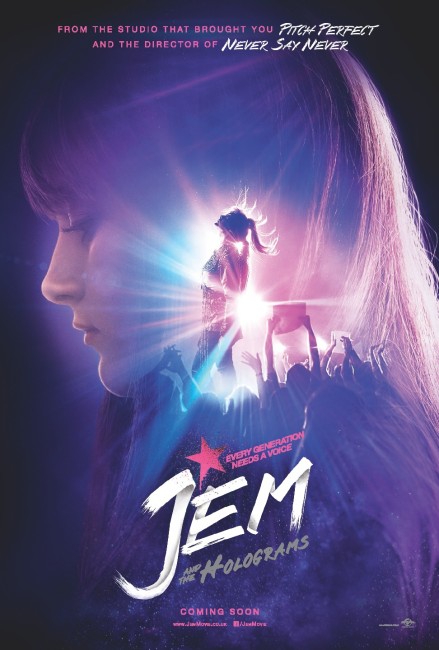 Jerrica Benton and her sister Kimber live with Aunt Bailey, along with two other foster sisters Shana and Aja. The four girls play music together as a band but Jerrica has a fear of letting her singing be seen by others. Rather than delete a video recording of Jerrica singing, Kimber uploads it to YouTube under the username Jem without telling her. They are astonished to then find that the song has gone viral. Jerrica is immediately contacted by Erica Raymond, the head of the entertainment giant Starlight Enterprises, who wants to manage her. She asks Jerrica to come to Hollywood but Jerrica is insistent that the other girls come too. Under the watchful eye of Erica’s son Rio, the girls set about preparing for their first live performance. Jerrica is insistent that Jem be maintained as a public persona and her real identity be kept secret. At the same time, Jerrica has brought Synergy, the robot built by her late father, with her. As it comes to life in proximity to Hollywood, she realises that it is leading her on a quest to find a series of clues he has left.

Jem and the Holograms (1985-8) was an animated tv series based on Hasbro’s line of girl’s dolls. The dolls were originally intended to rival Mattel’s Barbie dolls although failed to sell that well – in fact, the line of dolls was discontinued before the series itself was. Created by Christy Marx, the show concerned Jerrica Benton who performed as the pop star Jem, along with an all-girl backing band called The Holograms. Jem was actually a secret identity that Jerrica maintained where she would adopt the garishly coloured stage persona with the aid of a hologram projected by her father’s A.I. Synergy and anchored through her earrings. Most of the plots for the series dealt with competition from rival bands and Jerrica’s secret identity complications.

This film version circulated as a property for several years. Hasbro sought to develop Jem and the Holograms as a film franchise after the success enjoyed by their Transformers and G.I. Joe films. Nobody could crack how to do it until the project fell into the hands of Jon M. Chu who was riding on the tails of G.I. Joe: Retaliation (2013). Chu had come from a music/dance background as director of the likes of Step Up 2: The Streets (2008), Step Up 3D (2010) and Justin Bieber: Never Say Never (2011), as well as one Chinese-language film, the children’s fantasy The Secret of the Magic Gourd (2007).

Chu finally managed to get the production off the ground by taking it to Jason Blum’s Blumhouse production company. Blumhouse have had great success in the last few years with films such as Paranormal Activity (2007), Insidious (2010) and various sequels to these. It is crucial though to note that the success that Blumhouse have had is by making horror films on medium-budgets (usually under $5 million). Unfortunately, this low-budget approach is something that seems to have spelt the death knell for Jem and the Holograms.

To understand why Jem and the Holograms fails and why it was subject to such fan derision, it is necessary to grasp the nature of the original series. It seemed like a weird genre-bending mix of teen pop fantasy and science-fiction superheroics. The characters looked like some kind of mad creations out of a Japanese anime. Jerrica would transform into Jem with the use of sophisticated holographic technology, which functioned not unakin to a superhero’s secret identity/caped costume.

In the film however, all of this disappears down into another version of Chu’s Never Say Never. Jem, just like Justin Bieber, is someone who became an instant star following a series of internet videos that became a viral sensation. The hologram element is written out and the garish makeups of the tv series become no more than her and her band dressing up with colour-dyed hair and makeup, while her secret identity as Jem is merely her keeping her real name a secret from the world (a plot aspect that was well worn by the Hannah Montana (2006-11) tv series). All of the fantastical elements of the tv series have been written out with the exception of the robot that accompanies Jem; in the tv series by comparison, Synergy was a computer who took the appearance of a hologram projection in the form of Jerrica’s late mother.

Even if one were watching Jem and the Holograms with no knowledge of the tv series, it would be dull. Fully half of the film comes with this blur of handheld camera footage that looks exactly like a bunch of teenage girls with cellphone cameras playing at being pop stars wannabes. Regular camera set-ups are mixed with a flurry of videoclips, texts and webcam selfies clearly intended to pitch the film to the generation raised with YouTube, Twitter and Instagram. Even when it is not, the action – including dramatic scenes where they conduct a break in to Juliette Lewis’s office – are cut up with videoclips that fans have made where they talk about how much Jem meant and/or dress up like the characters.

Everything is driven by a Plot Coupons script that seems painfully stretched – the girls have to go on a quest to visit various locations that the robot projects because some entirely invented reason to do with clues left by Jem’s father. Everything else is an incredibly predictable rags-to-fame plot – young starlet plucked from obscurity, takes the wild ride to fame before finding she has neglected the people that matter and everything being solved by the climactic concert scene. One of the few pluses of the film is Juliette Lewis, a great and underrated actress in the 1990s who disappeared into obscurity and Scientology in the decade in between, who returns as the villainess of the show in grand style where she gives the impression that she ad-libbed most of her lines.