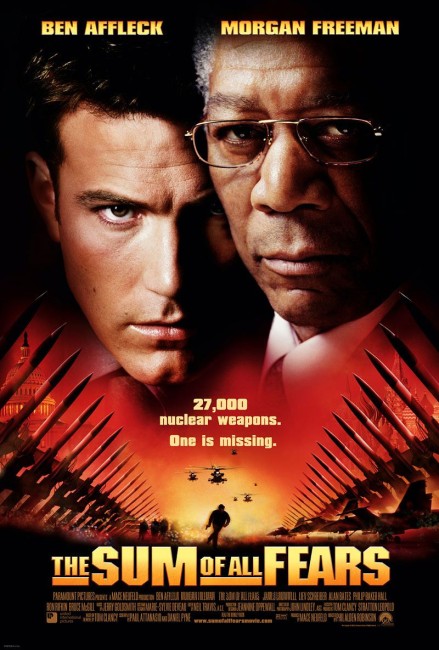 When Alexander Nemerov becomes the new President of Russia, junior CIA analyst Jack Ryan is brought to the fore because he has written a paper on Nemerov. Ryan insists that Nemerov is not a tough hard-liner but is apparently proved wrong when Nemerov accepts responsibility for a nerve gas attack on the Chechnyan capital Grosny. On a nuclear decommissioning mission to Russia, Ryan notes that three scientists are missing. This provokes Ryan’s curiosity and he goes out on a limb and uncovers a terrorist operation to smuggle a nuclear weapon salvaged from a crashed Israeli fighter into the US. However, he is too late to stop the plot as the warhead is detonated at a sports stadium in Baltimore. With the US believing Russia responsible, Ryan races to prove that the warhead was detonated by a neo-Nazi terrorist seeking to stir Russia and the US up against each other, before the two nations declare all-out nuclear war.

Tom Clancy (1947-2013) was one of the top-selling authors in the world with his brand of densely researched techno-thrillers. The Sum of All Fears was the fourth screen adaptation made from Clancy’s Jack Ryan novels. The first of these had been the immensely successful adaptation of The Hunt for Red October (1990), which had Alec Baldwin playing Ryan trying to track a missing hi-tech Russian submarine. Subsequent to that, Baldwin was replaced by Harrison Ford for the bland Patriot Games (1992) with Ryan facing IRA terrorists and the underrated Clear and Present Danger (1994) with Ryan up against Central American drug barons. With the relative lack of box-office success of Clear and Present Danger, the Jack Ryan series then fell silent. However, eight years later Mace Neufeld, the producer behind the other Jack Ryan films, returned here with another Ryan tale. The Sum of All Fears (1991) was the fifth of the Jack Ryan books and Tom Clancy’s sixth published.

Up to this point, Mace Neufeld filmed all the other Jack Ryan books in order, with the exception of The Cardinal of the Kremlin (1989), omitting it presumably due to the outmodedness of its Cold War themes. Most noticeably here, there is a considerable continuity gap between The Sum of All Fears and the other Jack Ryan films. The Hunt for Red October, for instance, was set in 1984 and featured a 32 year-old Alec Baldwin playing Ryan. The subsequent films were perfectly credibly able to recast the part with Harrison Ford who was 50 years old but looked in his forties.

The Sum of All Fears throws all of this continuity to the wind by setting itself in 2001 with a 30 year-old Ben Affleck (who seems all of about 22) in the part, playing a Ryan who is, contrary to the high-level position he held in the other films, now only a junior analyst. This comes in further contrast to Patriot Games where much is made of the abduction of Ryan’s wife and daughter, while here Ryan is single and at the end of the film proposes to a completely different woman.

This is something that goes beyond the suspension of disbelief that say the James Bond films require in having the central character perpetually rejuvenate his age (and face) and still remain youthful throughout the 1960s, 70s, 80s, 90 and 00s, into something that simply rides across the established continuity of the rest of the series. The sole reason for this has been the box-office conscious recasting of the part with the handsome youth-appeal name of Ben Affleck and the need to give him a romance to play off. There is no reason why the part could not have been played by Harrison Ford or someone else in the 40s/50s age bracket. The book version of The Sum of All Fears after all features a much older and more senior Ryan than the film does.

With such a credibility hole against it, one did not go into The Sum of All Fears feeling inspired. On the other hand, Tom Clancy was on board as executive producer and there was Phil Alden Robinson as director. Phil Alden Robinson had previously directed the sublime baseball fantasy Field of Dreams (1989) and then went onto the enjoyable hacker thriller Sneakers (1992). (There are a few Sneakers in-jokes – notably jokes made about Dr Elena Ryshkov, one of the characters in Sneakers, near the start). Plus on script there was Paul Attanasio, creator of the superb tv series Homicide: Life on the Streets (1993-9), as well as scripter of Barry Levinson’s Michael Crichton adaptations, Disclosure (1994) and the underrated Sphere (1998).

Despite the names arrayed, The Sum of All Fears fails to work on most levels. Robinson and Paul Attanasio give the impression they are not creatively involved so much as merely tending a big-budget show that is being put on by other people. For all the rewriting of the series continuity for romantic appeal, the scenes between Ben Affleck and Bridget Moynihan are utterly banal. Most of all, compared to the intensity of the suspense generated by John McTiernan in The Hunt for Red October, the film here only ever generates a modicum of excitement when it comes to the race to the countdown at the end. Considering that this is a nuclear war we are talking about, the lack of intensity and concern generated is entirely underwhelming.

When it comes to something as enormous as all-out East-West nuclear war, The Sum of All Fears does an incredibly bland job of addressing the subject. In fact, it is probably the most banal treatment of nuclear war to be seen in any big-budget film on the subject. The bomb blast takes place with a surprising lack of affect. All we ever see is a wavefront of air causing Ben Affleck’s and The President’s helicopters to crash and a couple of post-blast matte shots of the mushroom cloud rising up over the city. Compare this to other films dealing with nuclear war such as On the Beach (1959), Fail-Safe (1964), The War Game (1965), The Day After (1983) and Testament (1983). (For more detail on the subject see Films About Nuclear War). By comparison, this is a film that shows almost nothing of the sense of devastation and human shock that would occur after such an event. The group I sat through the film with found more interest in geek nitpicking the bomb scenes afterwards – like seeing a helicopter merely knocked to the ground by an explosion when any such explosion would treat it like a marshmallow before a flamethrower; whether it would be possible to use a cellphone during the atmospheric disturbance caused by the blast; and how Ben Affleck’s hair and composure manages to remain entirely unruffled while walking through a rain of fallout.

The Sum of All Fears‘s principal failing was not anything that was particularly its fault but rather its timing. It was shot during most of 2001 but not released until May 2002. Of course, in September 11, 2001, Osama bin Laden launched his attack on the United States and such things moved out of the realm of fiction and into the real world. Coming after such an incident – and one notedly where the real events were much smaller in terms of devastation than the fictional terrorist attack depicted in the film – The Sum of All Fears cannot help but pale in comparison. There is nothing in the film that comes anywhere near approximating the sense of psychic shock that ran through the American people, the shock of wondering what on Earth had happened to disrupt the placidity of everyday life and the pained searching for some meaning and certainty to cling to in all of it. The reaction of The President here who, unlike George W. Bush, is personally affected and nearly killed in the incident, is mannered to the point of absurdity.

In reality, what the real-life incident triggered was an enormous redneck upsurge against all persons of even vaguely Arabic ethnicity; the suspension of civil liberties and due process against suspects with even the vaguest connection and the introduction of Draconian measures of security and surveillance to a level that makes George Orwell’s Big Brother pale in comparison. It is also interesting to contrast the reasonableness with which the nations and politicos involved here act with the actuality where Bush, with the seeming backing of the entire country, charged off and declared war on Afghanistan, unseated a sovereign nation, without ever (it has escaped most of the world’s attention) offering to the world any proof that would stand up in court that bin Laden or any of the rulers in Afghanistan were identifiably the authors of the attacks, acting more it seems simply out of the desire to find a target to strike out against and claim blood in justice than anything else. (In a striking case of reality imitating art, only a month after The Sum of All Fears premiered, US Attorney General John Ashcroft attempted to manufacture the claim that apprehended terrorist Abdullah al Muhajir/John Padilla had been attempting to build a dirty nuclear bomb to be detonated on the Eastern American seaboard).

In an almost comical case of a film’s prognostications almost entirely being outstripped by real world events, it is worth noting that in Tom Clancy’s novel the bomb is detonated by Islamic terrorists protesting against US support for Israel but this was changed by the scriptwriters as they did not find the notion of Islamic terrorists mounting a nuclear attack a credible one. Coming in a post-9/11 world The Sum of All Fears, which relies upon old 1960s views of international politics – America in a nuclear showdown with Russia, Nazi villains, and occasional nods to contemporary politics – Chechnya, nuclear decommissioning – seems hopelessly dated. It is the equivalent of someone still trying to make a WWII buddy war movie after Oliver Stone’s Platoon (1986) came out.

The Jack Ryan series fell silent following this and was rebooted again with Jack Ryan: Shadow Recruit (2014) featuring Chris Pine as another young Ryan, although this fared no more successfully. The Jack Ryan series was subsequently spun out as the tv series Tom Clancy’s Jack Ryan (2018– ). Other Tom Clancy works on screen have been the tv mini-series Op Center (1995), about the theft of nuclear weaponry, which Clancy later expanded out as the basis of his series of sharecropped books of the same name; the futuristic tv mini-series Net Force (1999) from Clancy’s other series of books; and Without Remorse (2021) based on one of Clancy’s other series.

Phil Alden Robinson did not return to the director’s chair for over another decade with The Angriest Man in Brooklyn (2014).