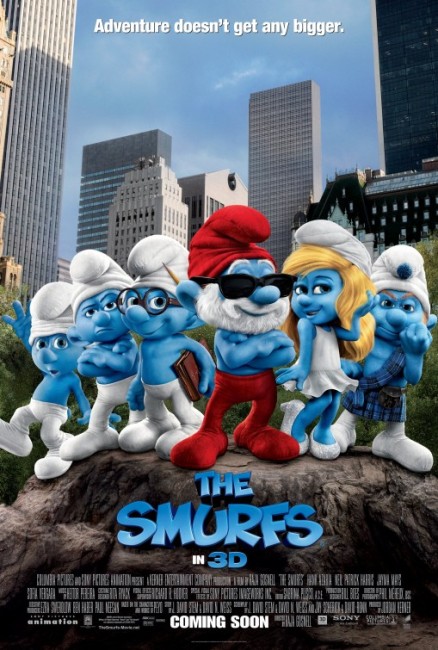 The small blue-skinned Smurfs live in the Enchanted Forest in a village hidden behind an invisible wall. The evil wizard Gargamel hates the Smurfs and wants to obtain their essence for his magic. He discovers the way through the invisible wall and invades the Smurf village with his cat Azrael. During the panic, Clumsy Smurf flees but does not see that he is heading to a waterfall that signposts warn to stay away from. Papa Smurf, Gutsy, Smurfette, Brainy and Grouchy run to stop Clumsy but are sucked through a vortex that opens up. They find themselves in New York City, which is bewildering to them. Gargamel and Azrael follow through before the vortex closes. Clumsy accidentally falls into a box being taken home by Patrick Winslow, a PR executive for the Anjelou cosmetics house. The others follow and are discovered and befriended by Patrick and his pregnant wife Grace. Papa Smurf tries to assemble the magical conditions to create a blue moon that are needed to reopen the vortex and return home. Meanwhile, Gargamel sets up a laboratory and makes all effort to catch the Smurfs.

The Smurfs were one of the great pop culture phenomena of the 1980s. Originally known as Les Schtroumpfs, The Smurfs were created in 1958 by the Belgian cartoonist Pierre Culliford who worked under the name Peyo. The Smurfs first appeared in the comic-strip Johan et Pirlouit (Johan and Peewit) (1952-67) in the children’s comic-book Le Journal de Spirou. Johan and Peewit was focused around the adventures of the king’s page Johan and the court jester Peewit. In one story, the two of them ventured into the land of the blue-skinned Schtroumpfs/Smurfs. The Smurfs proved so popular that their adventures soon came to dominate the comic-book and they were given their own title in 1959. The popularity of the Smurfs comics spread to reprints in other languages, as well as numerous spinoff merchandising, including records, videogames and collectible figurines.

On the screen, there was a Belgian-made animated film The Adventures of the Smurfs (1965), although this has never been widely seen and does not appear to exist in English translation, and Smurfs and the Magic Flute (1976), which was not seen on English-speaking shores until 1980-1 (after the success of the animated tv show) and in the US until 1983. The most popular incarnation of The Smurfs however was The Smurfs (1981-90), the English-language animated tv series made by Hanna-Barbera and is almost always what people have in mind when they talk about the Smurfs. Indeed, the Smurfs so permeated popular culture as a result of the Hanna-Barbera series that the term ‘smurf’ became an expression used to denote someone who is particularly childish or woolly-headed.

The Smurfs comes from Raja Gosnell, a director who has made various mainstream fare such as Home Alone 3 (1997), Never Been Kissed (1999), Big Momma’s House (2000) and Yours, Mine and Ours (2005). Since the 00s, Gosnell has become almost exclusively a director of light fantasy entertainment. He has previously ventured into live-action cartoon adaptations with the film version of Scooby-Doo and its sequel Scooby Doo 2: Monsters Unleashed (2004), as well as made two other talking animals film with the incredibly irritating Beverly Hills Chihuahua (2008) and Show Dogs (2018). The Smurfs is a co-production with Sony Pictures Animation, a company that has been on the rise in the last few years, having also made Monster House (2006), Open Season (2006), Surf’s Up (2007), Cloudy With a Chance of Meatballs (2009), Hotel Transylvania (2012), The Emoji Movie (2017) and Peter Rabbit (2018), plus the Aardman collaborations Arthur Christmas (2011) and The Pirates! Band of Misfits (2012).

The film keeps reasonably close faith to The Smurfs (or at least the Hanna-Barbera version) – although the Smurfs do look a little unnerving rendered in big screen detail with texturing added to their blue skin features. The film pays obeisance to the original Smurfs during the scene where Neil Patrick Harris’s Google search turns up the fact that they came from Belgium and were originally called Les Schtroumpfs, while the book of spells they leaf through is said to be by original creator Peyo whose photo is displayed in the frontispiece and also contains what look like some of the panels from the original comic-strips. These Smurfs are perhaps slightly more self-aware than their original counterparts with some wry dialogue about their habit for replacing every adjective with ‘smurf– and how annoying their “la-la-la” song is. There is still peculiarly only one girl Smurf – insultingly her character arc throughout the course of the film is to discover fashion, how to look good and realise that she can wear a range of dresses.

The plot is an assemblage of familiar elements from these other live-action cartoon adaptations. The comedic exploits with The Smurfs going amok in the bathroom and causing chaos in a department store are all regular set-ups for this type of film. The part about cartoon characters entering the real world through a portal is very similar to The Adventures of Rocky and Bullwinkle, while the story about a bunch of tiny characters causing chaos in the life of a regular guy before inspiring him to succeed in his business endeavours and realise the meaning of true friendship has been copied almost directly from Alvin and the Chipmumks.

There is some decidedly adult humour at times with gags about Gargamel pissing in a ice bucket in a restaurant or with Gutsy leaping in during Smurfette’s radiator dance and letting his kilt be blown up: “That cools the giblets … I like a cool breeze in the Enchanted Forest.” What The Smurfs perhaps does the worst of any film in recent memory is conduct blatant product placements as they visit FAO Schwartz with clear advertisements for Wild Republic, Madame Alexander, M&Ms and Hello Kitty, where Raja Gosnell’s camera even unashamedly frames the label for each of these in shot.

Certainly, The Smurfs is far less irritating than some of the other live-action animation adaptations – namely the Alvin and the Chipmunks films, Underdog and Yogi Bear. There is all the usual run of smartass colloquialisms and modern pop culture references – Smurfette doing a variant on Marilyn Monroe’s radiator dance in The Seven Year Itch (1955) and a rather out-of-place gag where Grumpy starts talking relationship-speak while cuddled up in the arms of a green M&M fluffy toy. There is the inevitable excruciating scene where Neil Patrick Harris and The Smurfs seem to be setting out to imitate Alvin and the Chipmunks with a round of Guitar Hero that has The Smurfs rapping to Aerosmith’s Walk This Way (1975). What should be said is this type of quick gag humour is much less here and by its very dint of doing so makes The Smurfs a far less irritating film that one was expecting it to be. Ultimately though, The Smurfs never amounts to anything more than a slickly polished commercial film that passes the time amiably. It could have been worse.

Neil Patrick Harris steps up to take the lead, doing a more than capable job of pretending to act to a bunch of creatures that are not in front of him. Jayma Mays plays with sunnily wide-eyed cheer opposite as his wife. Hank Azaria is handed a one-dimensional character and at least chews the scenery appropriately.

There were two sequels The Smurfs 2 (2013), featuring the return of Raja Gosnell and most of those present, and the animated Smurfs: The Lost Village (2017).