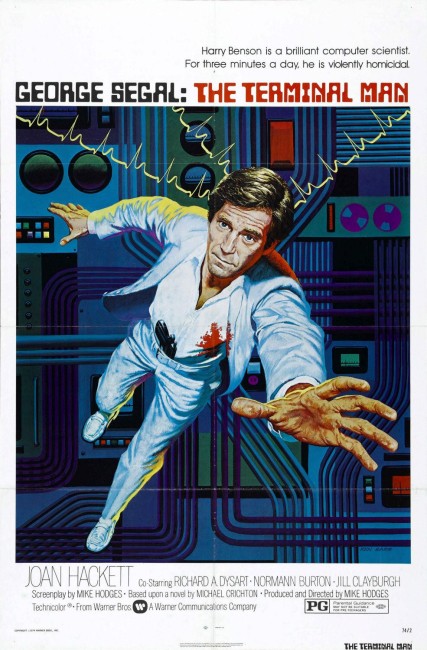 Computer programmer Harry Benson suffers from seizures that trigger episodes of ultra-violence. He is admitted to hospital for a groundbreaking operation to implant electrodes in his brain that will send tiny electric shocks to neutralise the seizures whenever they occur. Soon after the operation, the doctors notice that instead of being neutralised, the seizures have increased in frequency. They realise that Harry’s brain has become addicted to the electric shocks and is in fact triggering seizures to obtain more stimulation. Driven by this addictive need, Harry escapes hospital on a spree of violence and murder.

Novelist and later filmmaker Michael Crichton inhabited a niche that was peculiar to the 1970s. The films made by and adapted from Crichton’s works during the 1970s and early 1980s – The Andromeda Strain (1971), Westworld (1973), Coma (1978), Looker (1981), Runaway (1984) and this – inhabit a place that belonged very much to the principal anxieties of the science-fiction of the 1970s. Crichton’s star rose at a point when science-fiction cinema, very much in the shadow of 2001: A Space Odyssey (1968), was obsessed with the dehumanising effects of rampant technologism and it was here that Crichton’s pessimistic fears with such found a peculiarly welcome place. Crichton’s film career seemed at an end in the mid-1980s when Star Wars (1977) and Close Encounters of the Third Kind (1977) transformed science-fiction’s universe into a one of childlike innocence, no longer of cold sterility. The likes of Looker and Runaway died at the box-office and Crichton returned to novel writing until he was rediscovered all over again with Jurassic Park (1993) whereupon a host of adaptations of his works – Rising Sun (1993), Disclosure (1994), Sphere (1998) – again took up the themes of science going amok or of failings within complex business systems. (See bottom of page for a full list of Michael Crichton’s other films and adaptations).

In most of the above-listed Michael Crichton films of the 1970s/80s, either Crichton or the director attached has adopted a singular look – that of a white, clinical antisepticism that seems to completely alienate the humans within the frame. In The Terminal Man, Mike Hodges does the same with a deliberate effect that becomes chilling.

The operation where the surgeons are decked out in what seems like spacesuits and diving gear could almost be taking place in a far-flung future. Hodges even stacks the dehumanisation to the extent of having all the doctors in the film played either with a superciliousness or a cool aloofness, while George Segal, their helpless pawn, is allowed to give the only warm and human performance in the film. There is one unnerving shot with power drills and wires being inserted into Segal’s head where Mike Hodges then pulls back and has one of the doctors address a question to Segal where we suddenly realise that he is still conscious.

The eeriest scene in the film is one where Joan Hackett sits interviewing George Segal while behind a mirrored window technicians activate the various implant nodes and are able to induce tastes, bladder relief signals, childhood memories and even make Segal come on to Hackett – a scene that is disturbing in its implication that all human behaviour can be reduced to a series of electrical impulses.

Unfortunately, Mike Hodges makes a major mistake. The antiseptic clinicism, while making a striking effect in the first half of The Terminal Man, ends up stifling it in the second. While it makes startling point to deck the hospital out in pure white-on-whites, Hodges makes the mistake of dressing the real world scenes in exactly the same way. All the apartments are clean, futuristic and dehumanised with the inhabitants improbably wearing white negligees and robes – there is no humanity there for the monster unleashed by science to ravage. Where The Terminal Man should have been a tense and exciting film as we watched science’s Frankensteinian creature loosed in the real world, the effect of letting it take place inside ultra-clean apartments is to stifle a potentially intense thriller. The film was not a major success, never receiving a proper cinematic release in the UK. The Terminal Man is one film that would be well served by a modern remake.

Other films adapted from Crichton’s books include:- the extra-terrestrial virus film The Andromeda Strain (1971); Jurassic Park (1993); Rising Sun (1993), a superior adaptation of Crichton’s blatantly racist book about Japanese business practice; Barry Levinson’s adaptation of Disclosure (1994), Crichton’s novel about sexual harassment, which contains some sf elements; the lost world film Congo (1995); The Lost World: Jurassic Park (1997); Levinson’s underrated Sphere (1998) about the investigation of a crashed UFO; John McTiernan’s The 13th Warrior (1999), an historical epic about the meeting between Vikings and Neanderthals; Richard Donner’s dull adaptation of Crichton’s Timeline (2003) about time travel to Mediaeval France; the tv mini-series remake of The Andromeda Strain (2008); and the tv series remake of Westworld (2016– ). Michael Crichton’s other works as director include:– Westworld (1973) about an android amusement park that goes amok; the medical conspiracy thriller Coma (1978); The Great Train Robbery (1979) about a Victorian train heist; Looker (1981) about virtual models; Runaway (1984) about a police force to stop amok robots; and the courtroom thriller Physical Evidence (1989). Crichton also created the hit hospital drama ER (1996-2009) and wrote the original screenplay for Twister (1996) about tornado chasers.

British director Mike Hodges first made distinction with the original Get Carter (1971). Mike Hodges’s other genre films are the script for Damien: Omen II (1978) (which he was originally set to direct), the remake of Flash Gordon (1980), the genre parody Morons from Outer Space (1985) and the superbly underrated clairvoyance thriller Black Rainbow (1989). For television, Hodges has also made The Healer (1992) about a faith healer and Murder By Numbers (2004), a documentary about the screen portrayal of serial killers. Hodges also co-wrote the afterlife film The Breakthrough/The Lifeforce Experiment (1994).