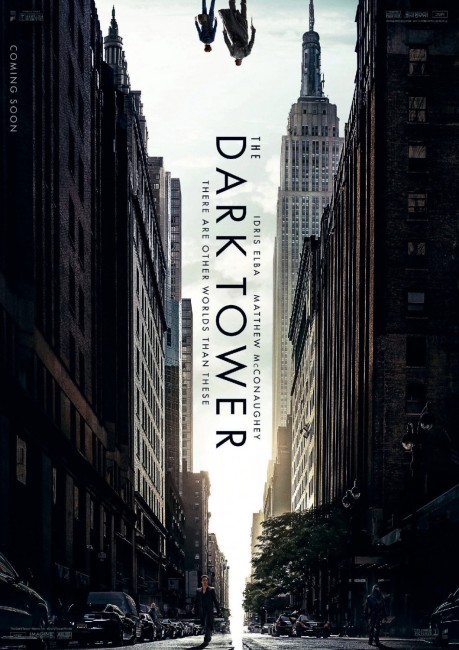 Young Jake Chambers lives in New York City with his mother and stepfather where he obsessively draws pictures of The Dark Tower, a gunslinger and The Man in Black. After getting into a fight at school, social services come to take Jake away but Jake realises that the social workers are The Man in Black’s minions who can inhabit human bodies and makes an escape. He goes in search of a building from his drawings and discovers that it is a portal that opens the way to another world. There Jake meets Roland Deschain, the gunslinger of his visions, who is able to shoot by innate ability. However, his crossing has been detected by the Man in Black who believes Jake to be the prophesied child who has the ability to bring down the Dark Tower that straddles the worlds of the multiverese. He now comes determined to find Jake in order to destroy The Dark Tower and allow he and his demons to reign free.

The books have proven a daunting proposition for any filmmaker. Not just in how to condense them to a single film or series but the fact that King writes in such a mind-boggling way – Jake, who becomes a straightforward kid in the film here, has multiple versions in the books and is killed off and then not at the same time. The film went through several different iterations with J.J. Abrams having contemplated the idea of a seven film series around 2007. This was taken up by Ron Howard and his Imagine Entertainment company in 2010, which would have emerged as a sprawling work comprising three films and a tv series. However, this proved too ambitious an idea for the studio and the project was cancelled. Howard still remains attached as producer and Akiva Goldsman, who wrote the script for Howard’s version, writes and produces the final version we have here. Alas, the film proved a dismal flop. King, Idris Elba and others remain hopeful of further films and/or a tv series, which may be a follow-on or a complete reboot. However, with the film’s near universal critical failure and inability to earn back even its own budget at the box-office, this seems unsure at present.

Filmmakers struggled with The Dark Tower for years trying to find a way to make the books accessible. Of all of these, you suspect that what emerges here is the most mangled. The books take place in a universe to which King gives a great deal of detail and colour. But the film feels like the script was written by people who had done little more than read the synopsis on the back covers of the books. Characters like Susan Delgado, Sayre and Pimli make random appearances that have no resemblance to their counterparts in the books. The Dark Tower is meant to be a mythical and metaphorical work that holds together the multiverse but becomes just a regular edifice that the Man in Black sets out to bring down well because. The vividly coloured and cultured location of Mid World is stripped down to no more than a village and a few pop up creatures.

Even beyond that, The Dark Tower makes little sense as a film. Usually the complaint I make here is that fantasy films do too little to give their worlds colour. The exact opposite is true here – the film drops hints of a world of rich and complex depth but one that only makes sense if you have read the books (and when you have, you are wanting to throw your collected set at the screen in frustration at everything that is missing). Goldsman tries to telescope the books down to a handful of boilerplate action scenes that feel like utterly clod-handed attempts to force the film into being a formula fantasy.

Under Nikolaj Arcel’s direction, the action and fantasy sequences are as routine, processed and formulaic as they get – an utterly perfunctory climactic fight to get through a portal as Jake is being drained of his energy to destroy the tower. The books are driven by a sense of The Gunslinger’s single-minded quest to find the Tower as he fights the fiendish traps and games the Man in Black lays for him but that is nothing but the most routine here. Rather than develop out the worlds that we visit, the film has Roland and Jake come through the portal to Earth where we get lame comic relief scenes of Roland’s greeting contemporary culture with High Speech and an assessment in an emergency room that causes the film to feels less like an adaptation than a bad parody of The Dark Tower.

The most authentic scenes in the film are when King’s mythology comes through – like the scenes where The Gunslinger is reciting his creed to teach Jake how to shoot. Elsewhere though, we get random creature effects with Idris Elba and Tom Taylor seeing vampire women and glowing cloud shapes that become Idris’s father but they seem so random they have no meaning in terms of anything else.

The film does have the benefit of two sterling actors in the central roles with Matthew McConaughey and Idris Elba. The way the Man in Black is conceived here almost seems like a diabolical version of Benjamin Cooper’s Jessie Custer from Preacher (2006– ), able to command people to do anything. Unfortunately, this now makes the Man in Black seem just another uninteresting black hat villain. Certainly, what the role has going for it is Matthew McConaghey who moves through with cold and controlled presence, having what seems to be a great deal fun with the material and owning the show. Idris Elba is a great actor but never quite makes Roland into The Gunslinger that is familiar on the page. Elba’s performance seems haunted and frightened, not like a grim loner on a vengeance trail. The other quibble one would have here is the casting of Black actor as Roland when King very specifically mentions that The Gunslinger is white – a crucial plot element of The Drawing of the Three involves split-personalitied Black woman Odetta Holmes angry at having been abducted through the portal by two white men, Roland and Eddie Dean.