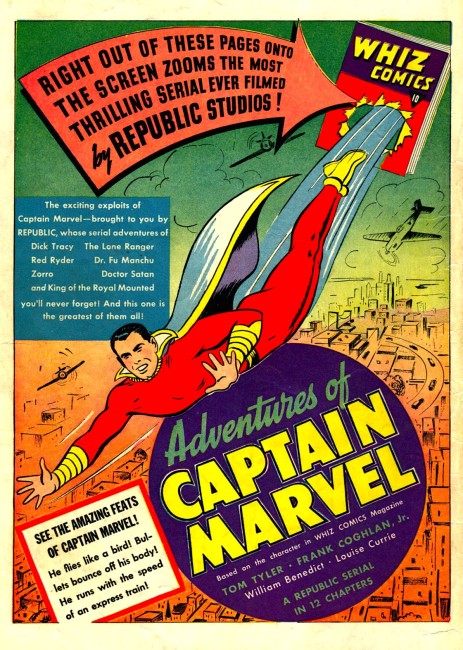 In the Valley of the Tombs in Siam, the archaeological expedition of Professor John Malcolm uncovers the tomb of The Scorpion. Radio broadcaster Billy Batson is accompanying the group but decides to respect the warnings against interlopers posted on the tomb. For his respect, an ancient figure appears and bestows a gift on Billy – he has to merely say the word ‘Shazam’ and he will be transformed into the superhero Captain Marvel. The others uncover a golden scorpion with lenses that when arrayed can project a disintegrating ray or else transform metal into gold. It is decided that the discovery is too dangerous and so the lenses are distributed among the five scientists of the expedition for safekeeping. However, once back in the USA, the masked villain known only as The Scorpion comes after the scientists to get the lenses. It is up to Billy, in the form of Captain Marvel, to stop The Scorpion and his men. As he does so, Billy then realises that The Scorpion is one of the five scientists.

Captain Marvel was always a rip-off of Superman. Captain Marvel first appeared in Whiz Comics #2 in February 1940 – only two years after Superman premiered. The character’s unique spin was that he was a young boy until he said the words Shazam, an anagram comprised of the names of the great heroes and gods – Solomon, Hercules, Atlas, Zeus, Achilles and Mercury – and he would then inherit their abilities and virtues. Unlike Superman, Captain Marvel’s writers did not take themselves terribly seriously – at one point, Captain Marvel had a talking rabbit Hoppy as companion and was battling a world-conquering intergalactic villain that was finally revealed to be a worm. Captain Marvel was popular – there were various spinoffs such Captain Marvel Jr, The Marvel Family, with Hoppy even appearing in his own comics, and then this serial, which was made only a year after the comic-book had premiered.

However, in 1946, DC Comics decided to sue Fawcett Publications, alleging that Captain Marvel infringed the Superman copyright. A protracted legal battle began, ending with Fawcett deciding to cancel the Captain Marvel line in 1953. In a bizarre turnaround, DC then brought the rights to Captain Marvel and launched their own Captain Marvel line of comic-books in 1973 entitled Shazam (so as to avoid confusion with Marvel’s unrelated superhero series which they had called Captain Marvel after discovering copyright on the name had lapsed). Under DC’s aegis, Captain Marvel has made appearances and undergone various retcons since then.

At the peak of the comic-book’s popularity – only a year after the original was first published – there was also this twelve-chapter serial made. Adventures of Captain Marvel is often spoken of as one of the best of all the serials. It’s not quite – or at least if it is that may say something about the impoverished quality and production values under which most serials were made. Certainly, Adventures of Captain Marvel is the most superheroic that serial superheroes were ever allowed to get. The film throws in a series of dynamically directed shots with Tom Tyler diving and forward-rolling into the action that are combined with flying model shots and back-projected footage (most of which are repeated several times over throughout).

Crucially though, this Captain Marvel’s superherodom never extends much more than that – in one scene, he rescues several people from a car that has gone off a bridge into the river but mundanely carries them out one at a time, whereas with any modern superhero you would expect him to lift the whole car out; in another scene, he and Louise Currie are tied up on a bombing range and he merely carries her away to shelter behind a rock while the hut blows up behind them instead of flying away to safety with her in his arms as one might imagine.

This is the most superheroic that superheroes of the serial era ever got – a few jumps, a couple of back-projected flight scenes and maybe one instance of super-strength – not even the well-remembered Adventures of Superman (1952-8) tv series rose above this imaginative impoverishment, while the serial incarnation of Superman in Superman (1948) cut its corners by animating all of the flying scenes.

There is the odd moment that raises some eyebrows today – in one scene, Captain Marvel turns a machine-gun around and wipes out a horde of natives, while in another he throws a villain off a rooftop. Certainly, one aspect that the serial does well is the alter ego, even if it is only a far less complex copy of the Superman/Clark Kent dichotomy. Frank Coghlan Jr makes a convincingly geekish and nasally ingenuous Billy, while the hawk-faced Tom Tyler makes a suitably intense and heroically profiled Captain Marvel.

There are some decent cliffhangers and death-traps – one where Captain Marvel is trapped on an electrified conveyor belt that is taking him toward a guillotine; a hidden panel that swings machine-guns into action to target interlopers; an excellent special effect with the hoods using the half-completed lens to melt the entire mountain; and a decently sustained sequence where the crew of a sinking ship are ferried to shore in a set of breeches. As with all serials, aspects of the plot are contrived – people deciding to have meetings at mines, Louise Currie racing off to try and trace the serial number of a truck, Billy deciding to fly to a meeting in his own plane – which are there for no other reason than to extend the plot and create cliffhangers. It makes for a passably decent serial, although hardly a classic.

Captain Marvel later appeared in a live-action tv series, The Shazam/Isis Hour (1974-6) where he was played by John Bostwick in the first season and John Davey in the second. There was the subsequent animated tv series The Kid Super Power Hour with Shazam! (1981-2), which is probably the one media incarnation that comes closest to the comic-books, incorporating the Marvel Family. He has also appeared in the live-action superhero comedy Legend of the Superheroes (1979), even in a dream sequence in an episode of The Drew Carey Show (1995-2004). He has also made appearances on various animated DC series such as Justice League Unlimited (2001-6) and Batman: The Brave and the Bold (2008-11), as well as a cameo in the animated film Superman/Batman: Public Enemies (2009). In the New 52-based Justice League: War (2014) and Justice League: Throne of Atlantis (2015), Shazam (voiced by Sean Astin) becomes a full member of the Justice League. Throughout the 00s, plans were announced to make a big screen Captain Marvel film, which eventually emerged with Shazam! (2019) starring Zachary Levi and with Asher Angel as Billy Batson.