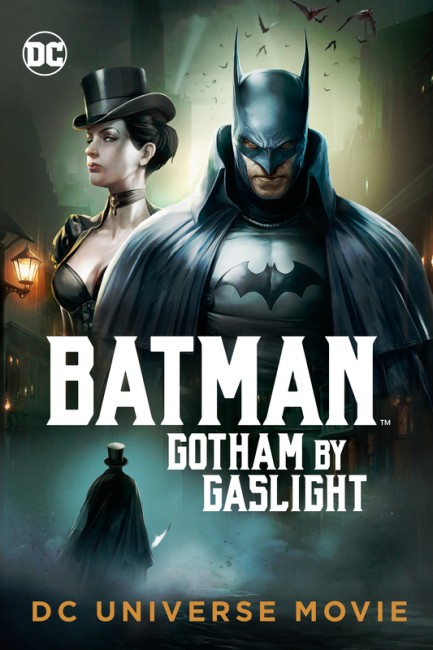 Gotham City in the late 19th Century. The city is terrorised by Jack the Ripper who is slaughtering women. There are also rumours of a shadowy figure known as Batman who fights crime. Behind the mask of Batman is wealthy orphan Bruce Wayne who is determined to find the identity of Jack the Ripper and stop him. During an attempt to pursue The Ripper, Batman meets and forms an admiration, later attraction, to dancehall actress Selina Kyle who is urging that the mayor take action on behalf of the murdered girls. However, Bruce is then arrested for the Ripper murders by Commissioner Gordon. Bruce’s friend Harvey Dent turns against him and leads the prosecution, sending Bruce to Blackgate Penitentiary.

Batman: Gotham By Gaslight is based on Gotham By Gaslight (1989), a one-off graphic novel by Brian Augustyn and Mike Mignola (who went on to create Hellboy). This offered the novelty of the basics of the Batman story and its familiar characters transplanted back a century to Gotham City of 1889 as Batman tries to solve the Jack the Ripper murders. This received some acclaim and Augustyn and Mignola followed it up with a sequel Master of the Future (1991). Gotham By Gaslight was retrospectively made into the first of DC’s Elseworlds imprint, consisting of a series of stories that imagine alternate timelines such as where Superman grows up in the Soviet Union or we get gender-reversed versions of Superman, Batman, Wonder Woman. Other stories place familiar characters into different milieus such as Batman as a pirate or a vampire, or where characters are reconceived in terms of German Expressionism, the Arthurian legends, fantasy worlds where they are magicians etc.

It should be said that Batman: Gotham By Gaslight the film is only loosely based on Gotham By Gaslight the graphic novel. There is the same overall plot of the Jack the Ripper killings having been relocated to Gotham City and Bruce Wayne being wrongly jailed for the murders. However, the film completely changes the identity of The Ripper – going from what was a newly introduced character on the printed page to offering up a jaw-droppingly unexpected suspect taken from comic-book canon in the film. The film also freely borrows elements from Master of the Future, including the world’s fair as backdrop and the fight aboard a dirigible.

I also think that Batman: Gotham By Gaslight does a far better job of its stated objective – of translating Batman to Gotham City of the late 1800s – than the Gotham By Gaslight graphic novel did. The pleasure of these Elseworlds stories is seeing what different interpretations the alternate telling puts on familiar characters. The graphic novel gave us no more than Batman, Alfred and Commissioner Gordon – although The Joker was mentioned as a background character (and is surprisingly absent in the film) – while all the rest of the characters were new ones created for the story rather than taken from existing Batman canon.

The film makes more of an effort to incorporate familiar characters. Added are Selina Kyle who is yet to operate as Catwoman but is a dancehall actress and an early suffragette who stands up for the women being killed by The Ripper. Batman gains the aid of a trio of street urchins Dickie, Tim and Jason, all the first names of those who have inhabited the mask of Robin. Elsewhere we have appearances of Hugo Strange, Harvey Bullock, Cyrus Gold (an alter ego used by Solomon Grundy) and Leslie Thompkins, the nun who aided young Bruce Wayne after his parents were killed, while Pamela Isley (Poison Ivy) is a dancehall girl with a leafy costume who becomes one of The Ripper’s victims. Harvey Dent also plays a key role – he has yet to become Two-Face but Selina has lines accusing him of being a “regular Dr Jekyll when he gets drunk” and he is written as Bruce’s best friend who turns against him to become his prosecutor at the trial.

I won’t go too much into the film relocating of the Jack the Ripper killings half a world away from Victorian London. Like the Jack the Ripper films made before the modern era – The Lodger (1944) being a notable example – this maintains the fiction that The Ripper’s victims were dancehall girls as opposed to prostitutes. The DC Universe Original Animated Films are notable for introducing some quite adults themes so one is surprised as to why they chose to resurrect this fiction. There’s also an amusing line where Batman says how his mentor once told him “when you have eliminated the impossible, whatever remains, however improbable, must be the truth,” which of course would make Batman’s mentor no less than Sherlock Holmes.

I am not a huge fan of director Sam Liu, despite the fact he has become one of the most prolific DC Universe Original Animated Films directors (this being his tenth DC Animated film). He does not too bad a job in adapting the look of the DC animated films to create a Victorian equivalent of Gotham City. Liu is not the best action director but here creates an exhilarating set-piece in the middle of the film with Batman pursuing Jack the Ripper across the rooftops and they fighting around the skin of the dirigible at the same time as the police shoot it down over the streets in flames. There is also a not too bad climactic sequence with Batman and Jack the Ripper fighting in a burning Ferris Wheel amid the grounds of the world’s fair.