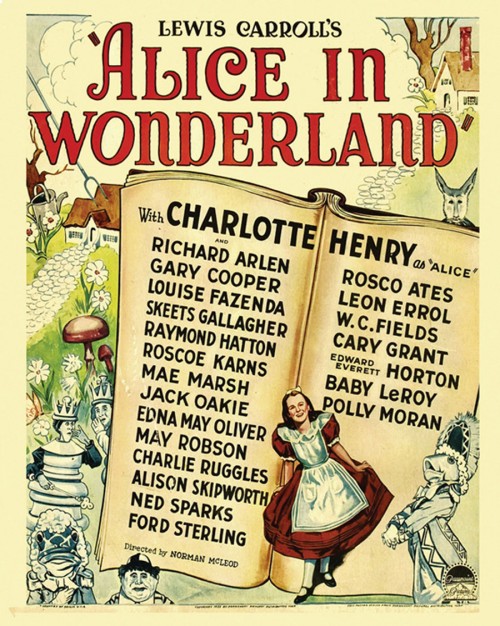 Young Alice walks through of a mirror into the world on the other side where she finds a place populated by a bewildering array of talking creatures and nonsense rhymes.

Alice in Wonderland was the first major sound adaptation of the Lewis Carroll book. At that point, It was the fifth film overall to have been made of the book). There had been an earlier short sound version made in 1931 but this appears to be lost. Many early sound era films were merely variations on radio variety shows. Alice in Wonderland was regarded as an all-star spectacle in this regard, bringing together comics of the era like Charlie Ruggles, W.C. Fields, Baby Le Roy and stars such as Cary Grant, Gary Cooper, Edward Everett Horton and Sterling Holloway in bit parts. The 1933 version is usually regarded as a lumbering, stagebound spectacle but to raise the spectre of contrary opinion, this author rather liked it.

Certainly, the film treats the book liberally, mixing elements from Alice’s Adventures in Wonderland (1865) and Through the Looking Glass (1871) all over the place – the film begins, for example, not with the famous scene where Alice follows the White Rabbit down a hole (although this scene does occur in the middle of the film) but by walking through the mirror, the less-remembered opening from Through the Looking Glass. This freewheeling attitude toward the book annoyed many Lewis Carroll purists. On the whole though, this is not too bad an adaptation. It is otherwise surprisingly faithful to the spirit of Lewis Carroll and finds a visual equivalent of the nonsense poetry, unlike the stumbling literalisations of many other adaptations.

Far more crippling are the drab and dumpy costumes that the cast are outfitted with, which look exactly like actors kitted out in ill-fitting costumes. Nevertheless, some of the character set-pieces come off well – the ones we are used to like the Red Queen’s croquet game (which is conducted somewhat ungainily using real flamingos), The Mad Hatter’s Tea Party, the Cheshire Cat – and some we are less used to – the encounters with Humpty Dumpty and Tweedledum and Tweedledee. Especially good is Gary Cooper’s White Knight.

The film was made in an era (the 1930s) when fantasy – even in fantastic cinema – remained resolutely prosaic and pedestrian. The film should be noted for its willingness to let the fantasy fly with all the nonsense absurdism of Lewis Carroll – Alice floats down the stairs and literally drowns in her tears. The climax is a memorably surrealistic set-piece featuring talking roasts and pudding and a banquet of flying teapots. The opening with Alice stepping in through the looking glass and finding a mirror-reversed room and the backs of the photos that hang on the wall is quite magical. The shrinking and enlarging effects are conducted with effective simplicity.

Director Norman [Z.] McLeod was a classic comedy director of the 1930s and 40s. He made early Marx Brothers films such as Monkey Business (1931) and Horse Feathers (1932), It’s a Gift (1934) with W.C. Fields and Road to Rio (1947), the fifth of the Bob Hope-Bing Crosby Road movies. In genre material, McLeod also made the ghost screwball comedy Topper (1937) and its sequel Topper Takes a Trip (1938), and the Danny Kaye daydreamer fantasy The Secret Life of Walter Mitty (1947).