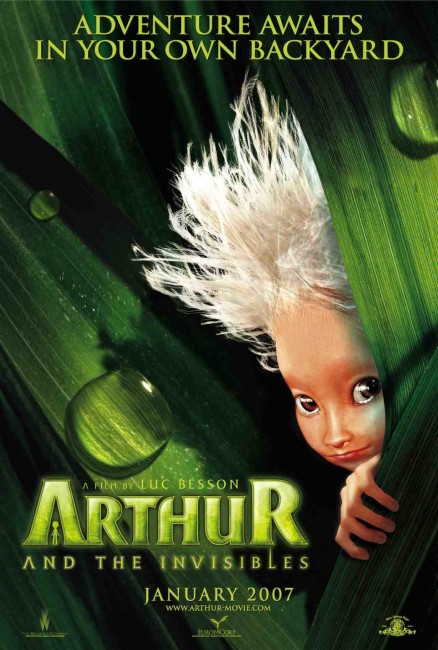 Rural Connecticut, 1960. Arthur lives on a farm with his grandmother. Arthur’s grandfather Archibald has gone exploring in Africa but his current whereabouts are unknown. Arthur’s grandmother then receives notice from a greedy real-estate developer that the farm is about to be repossessed within two days unless his grandfather returns to sign a contract and owing money is paid. Arthur reads in his grandfather’s journal how a treasure of rubies from the mysterious miniature African tribe known as the Minimoys is hidden somewhere on the farm. He discovers his grandfather’s treasure map and follows the clues. Massai tribesmen appear to lead him to a particular spot on the farm that appears once every ten weeks. There a telescope shrinks Arthur down into the world of the fairy-like Minimoys and he is transformed into one of their kind. Arthur learns that his grandfather is among the Minimoys but has been lost in the kingdom of Necropolis, which is lorded over by Maltazard the Evil. Joined by the Princess Selenia and her brother Betameche, Arthur sets out on a journey to Necropolis, across the now giant-sized territory of the farm, to confront Maltazard and reclaim the treasure.

France’s Luc Besson emerged in the 1980s with stylish works like Le Dernier Combat (1983), Subway (1986) and The Big Blue (1988). Besson gained considerable acclaim in the 1990s with dazzlingly pyrotechnic and character driven action films such as Nikita/La Femme Nikita (1990) and The Professional/Leon (1994). Alas, Luc Besson’s promise as one of the top action directors in the world was frittered over the next few years by disasters like the overblown sf/action dud The Fifth Element (1997), the unliked historical biopic The Messenger: The Story of Joan of Arc (1999) and the angelic intervention fantasy Angel-A (2005), which was hardly seen anywhere. Arthur and the Invisibles, the English-language title given to Arthur et les Minimoys, which is adapted from two children’s books published by Besson in 2002, was his first major release this side of the 00s.

Arthur and the Invisibles is a comeback of sorts for Luc Besson after the disappointments of The Fifth Element and The Messenger. After the first 20 minutes, Besson makes the move from a live-action American Midwest setting into a computer-animated fantasy world of richly imagined texture and depth. Try to imagine a conceptual mix of the world of The Dark Crystal (1982) combined with the backyard adventures of Honey, I Shrunk the Kids (1989). The characters resemble a cross between the Gelflings of The Dark Crystal and the fad for Troll dolls that we had a few years ago. The world that Besson and his animators have created is a mini marvel of design.

On the minus side, the plot is generic – the theme of the outsider hero and his party conducting a quest into the evil lord’s darklands is tried and true and Luc Besson never do anything innovative or unique with it. In particular, the expedition that Arthur, Princess Selenia and Betameche undergo is only a series of picaresque encounters – a journey on a flung seed pod, floating down a river in a straw, meetings with various Rastafarian Minimoys and evading Maltazard’s flood in a toy car. These are mostly a series of episodic animation set-pieces but the film lacks a sense of heroic adventure on a wider scale, of people struggling against vast odds.

Most of the scenes work engagingly on the level of eye-candy, especially a Star Wars (1977)-like battle between the Minmoys and a series of nasty wasp creatures. The only scene that does not work is a silly battle between various sides on a giant-sized turntable that suddenly turns into a clash of competing dancefloor styles. In the live-action scenes, Luc Besson aims for a depiction of classic rural Americana. Perhaps simply by virtue of the film being made by a French crew trying to recreate the American Midwest, this is something that seems slightly discordant and not quite right.

The plot of Arthur and the Invisibles resembles the same year’s The Ant Bully (2006), which was also an animated film about a young boy magically shrunken down to the size of insects and having to deal with the world there and eventually becoming its saviour. Arthur and the Invisibles also falls into the recent spate of films that involve ordinary people (usually children) venturing into magical worlds where filmmakers have gone wild in the imagination department – others around this time included The Chronicles of Narnia: The Lion, The Witch and the Wardrobe (2005), The Great Yokai War (2005), MirrorMask (2005) and Pan’s Labyrinth (2006).

There are some surprise names among the voice cast in the English-language version. There is everybody from Robert De Niro, Harvey Keitel, Emilio Estevez and Snoop Dogg voicing various supporting characters, while Madonna does a fine job as the plucky heroine of the show. It is also nice to see David Bowie back on screen – he voicing the villain of the show. Absent for most of the 1990s, Bowie made a surprise return to screens in 2006 with well-chosen parts in The Prestige (2006) and here – in a role that is not too different from the part he played in Labyrinth (1986).

Luc Besson made two sequels with Arthur and the Revenge of Maltazard (2009) and Arthur and the Two Worlds War (2010). The English language version of Arthur and the Invisibles overseen by The Weinstein Company ended up being a box-office and critical flop. Besson expressed dissatisfaction over the Weinsteins cutting seven minutes of material without his say-so. The two sequels only went to dvd release in English-language territories.

(Nominee for Best Production Design at this site’s Best of 2006 Awards).