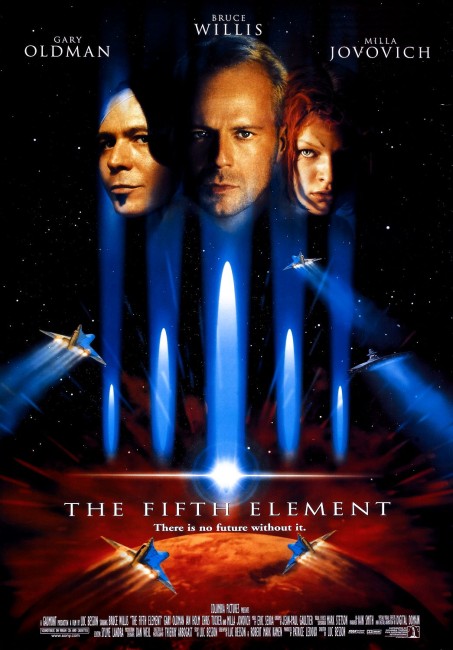 In 1914 an archaeologist uncovers a site in Egypt where runes speak of the four elements – water, fire, earth and air – that combine to make a fifth element, life. The runes also tell how the elements come under threat every three hundred years by a vast force. Immediately after, aliens appear from a spaceship and entrust a priest and his descendants to guard the site and the sacred stones until they return again. 300 years later. Earth forces detect a vast alien object heading into the solar system, which the latest of the priests determines is a force of anti-life. The good aliens return but their ship is shot down by the thugs of billionaire businessman Immanual Zorg. One part of the destroyed alien ship survives and is brought to government laboratories where it is analysed and is found to contain DNA dozens of times more complex than human. They construct a body out of the DNA – that of a girl who it is determined is a supreme genetic being. Confused, the girl Leeloo breaks out of the laboratory and dives off the side of the building where she lands in the back seat of the flying cab driven by former security forces operative Korben Dallas. Dallas is reluctantly charged with guarding Leeloo as they are hunted by Zorg’s men. There they become engaged in a desperate bid to retrieve the four stones of the elements before the alien ship arrives and destroys all life on Earth.

The Fifth Element has to be one of the greatest wasted opportunities in the history of science-fiction cinema. One expected a good deal of The Fifth Element. It was made by Luc Besson who up to that point had proved himself as one of the finest action directors in the world, having made such dazzling works as Nikita/La Femme Nikita (1990) and The Professional/Leon (1994), action films that came with a powerful human edge. Earlier Luc Besson had also made other stylishly effective works such as Subway (1986) and the mystical deep-water diving film The Big Blue (1988), as well as one other venture into science-fiction with Le Dernier Combat (1983), a fascinating venture into Mad Max 2 (1981) territory that abandoned post-holocaust roller derbies for strikingly poetic and artistic directions.

One expected that Luc Besson’s venture into big-budget science-fiction would have been something as revolutionary as Blade Runner (1982) was in the 1980s – certainly the trailer looked phenomenal, like Besson was offering up the purest filmic incarnation of the look of Metal Hurlant (1975-2004) ever – and in fact, Besson had hired French science-fiction illustrator Jean ‘Moebius’ Giraud as a consultant.

However, Besson goes wrong – disastrously so. It is hard to imagine what Luc Besson thought he was doing with The Fifth Element. You are never sure from one minute to the next whether he is taking the film seriously or not. His tone flails wildly between mindlessly pounding action and wild camp. The entire look of the film seems designed for a tone of hard realism but Besson treats it as a bad joke – some scenes like where Gary Oldman gets a cherry pip stuck in his throat and virtually any scene in which Chris Tucker appears have something fascinatingly awful about them. Even Luc Besson’s exhilaratingly pyrotechnic action style appears to have deserted him.

Then there is the story – or lack of it. The Fifth Element feels like a science-fiction film made by people who have no idea of what science-fiction entails. The film operates somewhere down there below the level of Saturday morning cartoons – an incomprehensible muddle of comic-book action, Blade Runner-esque Cyberpunk future realism, Erich Von Daniken-ian Chariots of the Gods nonsense and alchemical mysticism.

It is hard to believe the corniness of some of it – the villain has a name like Zorg like something out of a bad 1930s pulp alien invasion novel; the hero manages a straight-faced line several times about having to “save the universe” and just happens to be a space marine who is slumming it as a New York cab driver (he improbably gets into the action when the heroine lands in the back of his cab after surviving a 100 storey leap).

Plausibility holes abound – the heroine manages to become a martial arts expert just by reading a book about the subject but never doing any practice and when she is genetically engineered into being even manages to come constructed with a bad orange hair dye job. The script bandies about terms like Ultimate Evil in the Universe and Supreme Being but these seem meaningless – the Ultimate Evil is an undefined black space-going blob that does nothing except head toward Earth and go up in a pyrotechnic flash at the end; the Supreme Being is a confused waif of no particularly supreme abilities or intelligence whose purpose in the film is equally unclear. Luc Besson reportedly came up with the idea for The Fifth Element when he was in high school; the sad thing about the finished film is that it emerges exactly like an incoherent hodgepodge written by a high-school kid and not an adult.

Further, Luc Besson does little with the fine cast he assembles. At the time, Bruce Willis was emerging as one action star who had a sense of wry humour and some acting ability that stood him shoulders above other contemporaries but his role here is one that could have been filled by anybody. Indeed the part would have been more eminently suited to the woodenness of his contemporaries like Arnold Schwarzenegger, Sylvester Stallone or Jean-Claude Van Damme. Besson fails to use Bruce Willis’s laconic persona anywhat and Willis himself appears disinterested in the film.

Milla Jovovich (who was Besson’s wife at the time)’s waif act has its amusements but similarly Besson has no idea what to do with her as a character. Ian Holm is solidly professional, Gary Oldman typically overplays and Chris Tucker, seemingly cast in an attempt to outdo The Adventures of Priscilla, Queen of the Desert (1994), gives a performance of squealing excess that is fascinatingly awful to watch.

What almost makes The Fifth Element worthwhile is its background, which is as visually alive in texture and detail as Blade Runner was. There are fascinating little throwaway touches – Faster-Than-Light planes and streets filled with aerial traffic, including airborne McDonalds drive-thrus and flying junks that sell Chinese food from window to window. Bruce Willis has this cool foldaway apartment where the shower, the bed and the fridge all pack up and slide down behind each other. There are charming little pieces like Ian Holm getting drunk before a robot barman that is programmed to nod sympathetically. There are some nifty gadgets such as Gary Oldman’s multi-use gun and a police device that x-rays apartment walls. It is just that whenever the film tries to do anything else, the plot is so utterly inane you feel like kicking yourself.

Luc Besson’s other films of genre note are the arty Le Dernier Combat (1983) set in a post-holocaust world where people have become mute; his fantastical interpretation of the historical story of Joan of Arc in The Messenger: The Story of Joan of Arc (1999); the eccentric angelic intervention film Angel-A (2005); Arthur and the Invisibles (2006), a part-live, part-animated film based on his own children’s books about adventures in a land of miniaturized people, and its sequels Arthur and the Revenge of Maltazard (2009) and Arthur and the Two Worlds War (2010); the adventure film The Extraordinary Adventures of Adele Blanc-Sec (2010); Lucy (2014) in which Scarlett Johansson gains enormously expanded mental abilities; and the space opera Valerian and the City of a Thousand Planets (2017). Besson also produced and wrote The Dancer (2000) about a mute dancer who gains expression through a unique sound invention; produced the mystical quasi-sf Quebecois film Chaos and Desire (2002): wrote and produced the End Times serial killer thriller Crimson Rivers II: Angels of the Apocalypse (2003); produced the serial killer film Tristan (2003); produced and wrote the futuristic action film Banlieue 13 (2004) and its sequel Banlieue 13: Ultimatum (2009); produced the serial killer thriller Tell No One (2006); produced the Backwoods Brutality film Frontier(s) (2007); produced the videogame adaptation Hitman (2007); produced the horror film The Secret (2007); produced the animated A Monster in Paris (2011); produced the orbiting prison film Lockout (2012); wrote/produced the English-language Banlieue 13 remake Brick Mansions (2014); and wrote/produced The Warriors Gate (2016) in which a videogamer is transported to Ancient China.

(Winner for Best Production Design, Nominee for Best Special Effects at this site’s Best of 1997 Awards).