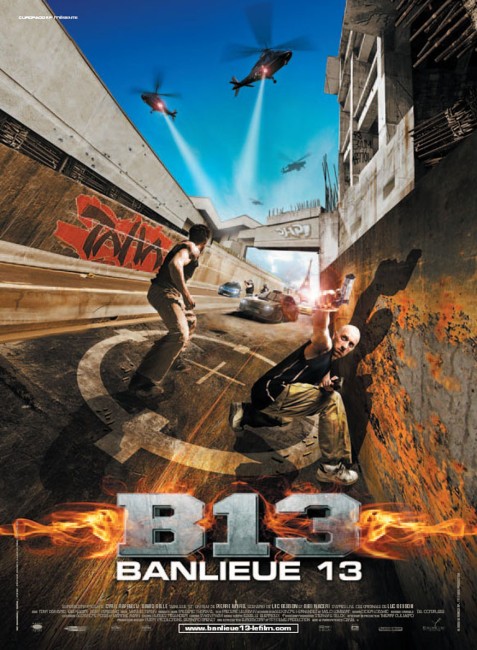 In 2010, Paris creates a wall that blocks off District 13, the worst neighbourhood in the city, preventing anybody from getting in or out. In one District 13 apartment block, Leito fights a war to keep out the drug lords that rule the neighbourhood. When Leito steals a haul of drugs from the local kingpin Taha Ben-Mahmoud and dumps them, Taha swears vengeance and abducts Leito’s sister Lola. In the fight that ensues, Leito takes Taha to the local police station at gunpoint to face his crimes, only for the corrupt police commissioner, who is closing the precinct down, to arrest Leito and let Taha go. Six months later, undercover police officer Damien Tomaso is given the assignment of going into District 13 to retrieve a clean bomb that has been hijacked by Taha’s men and is about to detonate in 48 hours. It is arranged for Damien, posing as a prisoner, to break out of police custody during transfer along with Leito. Leito sees through the ruse but agrees to aid Damien in order to rescue Lola who has been turned into a drug addict by Taha. They break into District 13. As they fight past Taha’s army of men to get to the bomb, they begin to suspect that Damien’s taskmasters are not being truthful about the nature of the mission.

French director Luc Besson has been responsible for some of the most stylish action films of the 1990s, including Nikita/La Femma Nikita (1990) and Leon/The Professional (1994), as well as overinflated duds like The Fifth Element (1997) and The Messenger: The Story of Joan of Arc (1999). Into the late 1990s and 00s, Luc Besson has taken on more of a producer role, producing and frequently writing efforts for a number of other directors. Banlieue 13 is one of these, which Besson produces and co-writes (along with Larbi/Bibi Narceri who plays the drug kingpin in the film).

Director Pierre Morel worked as a Steadicam operator on The Messenger and directed miniature units on Besson’s Arthur and the Invisibles (2006), while also worked as a cinematographer on various French films such as The Transporter (2002) and Unleashed (2005). After making his directorial debut with Banlieue 13, Pierre Morel was subsequently given directorial control of the high-profile Besson written/directed thriller Taken (2008), went onto make the action comedy From Paris with Love (2010), the tv movie remake of Clan of the Cave Bear (2015), several other action films with The Gunman (2015) and Peppermint (2018) and was at one point announced as the director of a proposed big-budget remake of Dune.

Banlieue 13 is largely a film that has been conceived around its action sequences. This is surely evidenced evidenced by the fact that the two stars of the show have not been chosen for their resumes as actors but for their stunt work. Cyril Raffaelli who plays the police officer has some credits as an actor but a far more substantial number as a stuntman and stunt/fight coordinator. Even more so, David Belle, a former gymnast, fireman and martial artist, is not known for his film work so much so as he is for inventing the sport/discipline of parkour in which participants race across urban landscapes, making all effort to pass through or across any obstacle (such as a building) that is in the way.

Pierre Morel clearly shows that he has learned his lessons from Luc Besson and creates an exhilaratingly paced action vehicle. The film opens on a kickass parkour sequence where David Belle shows his stuff in a chase through an apartment block, which has him bouncing off the walls to avoid pursuers, sliding through the narrow transom above a door, diving through open windows to grab onto a waiting rope while his pursuer falls to their death, sliding between balconies and leaping between buildings. It is an incredibly exhilarating sequence that leaves one breathless. There is no wirework or CGI stuntwork here – it is clear that what we are seeing is the real thing.

There is an equally exhilarating sequence that occurs a few minutes later when Cyril Raffaelli fights his way through a casino amid some breathless martial arts moves, which are choreographed by Pierre Morel in a series of dazzling Bullet Time slow-motion shots. These two sequences are so exhilarating that nothing else in the film matches them. On a level of pure kinesis, Banlieue 13 gets full marks.

On the other hand, when considered as the science-fiction film it purports to be rather than as a vehicle that has been thrown together to highlight action sequences, Banlieue 13 proves less interesting. Luc Besson and Bibi Narceri have borrowed the set-up from Escape from New York (1981) – of a closed-off area of the city where the authorities have given up on trying to maintain law and order and locked the inhabitants in, as well as a plot that involves a crack operative being given a vital mission to go into this lawless wasteland. (Luc Besson also borrowed the basics of Escape from New York in the subsequent Lockout (2012) set aboard an orbiting prison).

Alas, this is not a film where anybody has credibly thought through the elements present. The sociology of thinking that has gone on – that politicians would consider detonating a weapon of mass destruction on a neighbourhood of Paris – seems preposterous. (Not to mention that they seem to have chosen for the task a weapon that has no remote timing device, nor even one that can pinpoint and target its location).

In terms of story, what we have seems more like a standard crimeland drug action film than it does a science-fiction film. For all its futuristic setting, District 13 seems like no more than a contemporary neighbourhood where nothing has changed since the walling off. People appear to be living life as normal – there is not even any kind of collapse into anarchy. You keep asking questions – like if the area has been walled off, how do the inhabitants get food, water and power? Or more importantly how does drug lord Bibi Naceri get the drug shipments that we see David Belle destroying in the opening moments into the neighbourhood?

Unlike John Carpenter, Luc Besson and Bibi Narceri at least expend some thought on the political implications – how the situation creates a class war where the inhabitants of the less well-off Parisian suburbs are seen as an underclass worthy of extermination – an idea that was first brought out in the cheap Escape from New York copy 1990: The Bronx Warriors (1982). (Banlieue 13 would certainly have been even more incisive if it had been set in the US using a suburb like Harlem or South Central L.A.). David Belle has a potent speech expressing the unjustness of how he has been treated as a criminal just because of where he was born.