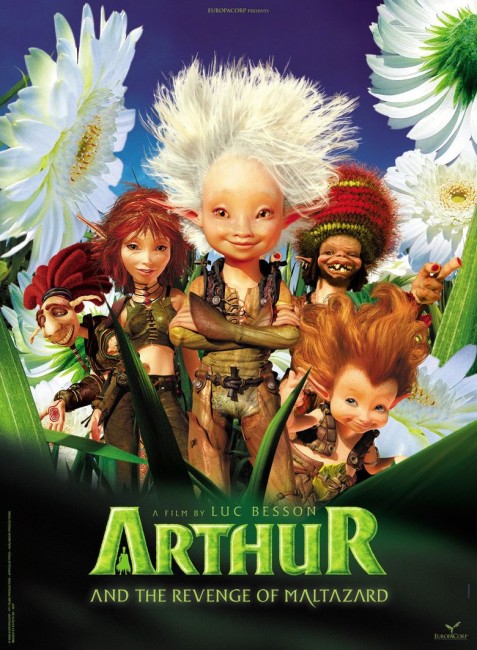 Arthur has been waiting for the conjunction of the moon that night that will allow him to travel back down the telescope to the world of the Minimoys so he can see his beloved Princess Selenia again. His father becomes obsessed with destroying the insects on the grandparents’ farm lest they endanger Arthur’s health. When the Bogo tribesmen and Arthur’s grandfather warn him not to disturb nature, Arthur’s father becomes offended and decides they will return home early. Just before they depart, a spider delivers a grain of rice to Arthur that has the words ‘Help Me’ carved on it. Arthur’s father ignores Arthur’s plea to stay one more day and so Arthur runs away and shrinks down to join the Minimoys. He tries to find where the message for help came from, only to discover a trap laid by Maltazard who desires to return up through the telescope and become human-sized.

Arthur and the Revenge of Maltazard is the second in a trilogy of films from French director Luc Besson. The trilogy began with Arthur and the Invisibles (2006) and was followed with Arthur and the Two Worlds War (2010). Luc Besson is probably better known for arthouse fare such as Subway (1986) and The Big Blue (1988), before emerging in the 1990s as a director of acclaimed action films like Nikita/La Femma Nikita (1990), Leon/The Professional (1994) and going onto other works like The Fifth Element (1997), The Messenger: The Story of Joan of Arc (1999) and Valerian and the City of a Thousand Planets (2017). (See below for Luc Besson’s other genre films).

Arthur and the Invisibles enjoyed great success in France, however the English-language release overseen by The Weinstein Company, which was stripped of some seven minutes of footage without his say-so, is something that Besson publicly deplored. The English-speaking public did not respond well to Arthur and the Invisibles – it enjoyed minimal box-office and poor reviews. This is particularly noticeable when it comes to the two sequels, which received scanty English-language release and went directly to dvd release in most territories. Where the English-language dub of Arthur and the Invisibles brought together an impressive cast of voices, including Madonna, Robert De Niro, David Bowie, Harvey Keitel, Jason Bateman, Emilio Estevez, Chazz Palminteri and Snoop Dogg, Arthur and the Revenge of Maltzard at most brings back Snoop Dogg and has the role of Maltazard voiced by another rock star Lou Reed.

You can see why Arthur and the Revenge of Maltazard went nowhere in English-language release as it is a disappointingly shabby film. Even more so than the original, the sequel is pitched down at a level of child-like escapades – in fact, the film seems to exist on no other level than this. Everything operates according to simplistic divides – the Minimoys, Bogos and Arthur’s grandparents are good because they respect nature, Arthur’s father is regarded as a comic caricature and becomes the butt of constant slapstick violence because he is unnaturally obsessed with wanting to kill insects.

The animated action scenes often seem superfluous – more like they are there because Luc Besson decided that he needed to throw them in at various intervals. The opening of the film is an animated sequence that shows the Minimoys coming to life with the arrival of spring that tours Minimoy life for a few minutes but holds no particular purpose other than to show off some cutsie animation.

There is a tedious sequence in the middle of the film with Arthur and Betameche fleeing on the back of a beetle, zipping through the city, avoiding rats underneath the grandparents’ house, flying through a fan and being pursued through a field, while having to ditch a glow-worm underneath the beetle’s carriage in mid-flight. It is a sequence that seems solely to be about kinesis and the animators showing off more than it ever adds anything to the film and can be forgotten precisely the moment it is over.

The world of the Minimoys takes place in the same iridescent day-glo colours as the original. While it was visually striking the first time, there seems an exceeding banality this time – the scene where Max takes Arthur on a ride down the main drag of Minimoy central in a pimped-out beetle looks exactly like the sort of thing that belongs in a ‘hood film about young guys trying to act cool in a car.

The other failing of Arthur and the Revenge of Maltazard is its slightness as a story. The entire film is set-up. We have protracted scenes in the live-action world involving Arthur’s father’s attempts to kill insects and with Arthur trying to avoid his father’s insistence that they go home so that he can respond to the Minimoys call for help, followed by a tour of Minimoy city and the rescue of Betameche, all before the last ten minutes where Maltazard reveals his deception and heads up the telescope. In other words, we have an entire film that seems to act as an extruded prologue that has no more purpose than to set-up the conflict for third film.

The other negative point is Lou Reed’s voicing of Maltazard, which he seems to have no sense of how to dramatically inflect the material. Rather Reed seems like a non-professional actor who has just been brought in off the streets and has given a rote reading of the material like some camera-shy farmer.