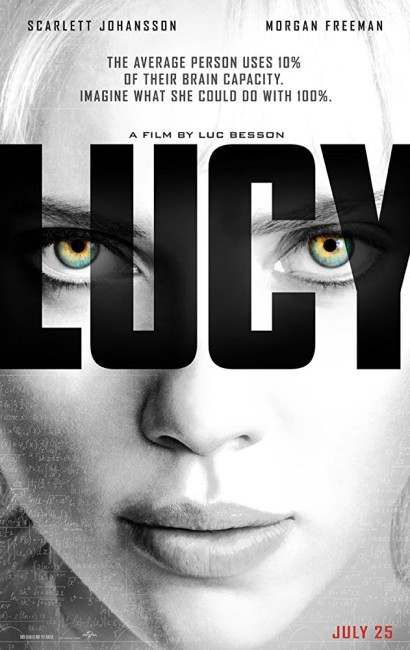 In Taipei, the American girl Lucy is pushed by Richard, a guy she hooked up with in a nightclub a few days ago, to deliver a briefcase to a Mr Jang in a hotel. When she demonstrates reluctance, he slips the handcuff of the briefcase on her wrist and forces her to go in, saying Mr Jang is the only one who has the code to undo the cuffs. Inside, Lucy is made a prisoner at gunpoint by Jang’s thugs and forced to open the briefcase, which contains four packages of a new drug CPH4. She comes around to find that one of the packages has been sewn inside her stomach. She is forced to act as a drug mule and carry the package into the US. However, one of her captors kicks Lucy, rupturing the package and causing a massive amount of the drug to flood into her bloodstream. This radically alters Lucy’s system, sparking the unused 90% of her brain into action and she is able to break her bonds and escape. Discovering that she has more and more powers, including the ability to rapidly assume knowledge, manipulate her body, matter, control other people and see through objects, Lucy sets out across Europe to get to Professor Stanley Norman, the one scientist that can understand her newfound condition.

Luc Besson became one of the powerhouse directors during the 1990s with the double slam of Nikita/La Femme Nikita (1990) and Leon/The Professional (1994) and seemed one of the most exciting directors on one’s watch list. Only a couple of years after this though, Besson had slid into the overblown visual effects juggernauts of The Fifth Element (1997) and The Messenger: The Story of Joan of Arc (1999). The 2000s were a much stranger decade for Besson, filled with all manner of odd experiments that range from the angel self-realisation drama Angel-A (2005), a trilogy of children’s films beginning with Arthur and the Invisibles (2006) to the Aung San Suu Kyi biopic The Lady (2011), before bouncing back to form with the incredible Valerian and the City of a Thousand Planets (2017). During this same time, Besson also shepherded in as producer and writer a host of other actions films that come with an above average stylism and gritty intelligence, including the likes of The Transporter (2002) and sequels, Banlieue 13 (2004), Taken (2008), Colombiana (2011), Lockout (2012) and 3 Days to Kill (2014).

After a decade of odd experiments, Lucy feels like Luc Besson welcomely returning to the kick-ass hyper-adrenalised action film with which he is most associated. Scarlett Johansson plays another of the heroines that Besson seems to prefer – see Nikita, Natalie Portman in The Professional, Milla Jovovich in The Fifth Element and The Messenger, Rie Rasmussen in Angel-A, even arguably the real-life figure of Aung San Suu Kyi in The Lady – kick-ass tough women who have vast abilities, wisdom and intelligence that goes light years beyond the human norm. The plot comes with a preposterously entertaining absurdity – sort of Limitless (2011), with its magic drug that boosts the unused percentage of the human brain, reconceived as an action film. That and a good few doses of John Dies at the End (2012), which had a similar drug that allowed the taker to move through time and space and gain a host of other mental powers.

Lucy starts supremely well – from Scarlett Johansson being lured into an obviously shady deal by her boyfriend (Pilou Asbaek) to deliver a briefcase to a hotel and having it handcuffed to her wrist when she demonstrates reluctance, which rapidly goes wrong as she enters the hotel lobby and is surrounded by goons with guns and outside sees Asbaek getting a bullet in the head. She is then taken to a suite and talks with the crime boss (Min-sik Choi) via an interpreter on a phone (who assures her he has spent a year in a New York business school) and is forced to open the combination to the briefcase while Min-sik Choi and his men take shelter in the next room or behind plexiglass riot shields. The briefcase is opened to reveal four packets of ultramarine blue drugs, whereupon an addict is brought in and made to test before being shot. It is one of the best openings one has seen in a film in some time – something that creates mystifying suspense about what is about to happen and nonchalantly deflates it with deadpan humour, something that Quentin Tarantino who loves this sort of this sort of sophisticatedly dangerous cool could barely have done better himself.

From there, Lucy slips into a goofily entertaining absurdity. About the point where Scarlett Johansson’s ingestion of the drugs into her system involves her on the end of a chain frenetically writhing up the wall and around the roof of her cell, the coolness of the opening slips into absurdity. Actually, it begins even before then. The film’s poster comes with the tagline “The average person uses 10% of their brain capacity. Imagine what she could do with 100%.” The fact that nobody during the script or promotion stage sought to consult a neurologist who would have dispelled the notion of the average human only using 10% of the brain as an urban myth that has been taken up by New Agers and positive thinking gurus who see the mind as full of vast untapped psychic potential stands out with a glaring obviousness and gives the film negative points before you have even sat down to watch.

The other quibble I would have is that so much of Lucy’s amazing abilities are innately obtained – she instantly learns foreign languages, becomes an instant crack gunshot but without actually having to do anything that most people do which is to learn or practice their use. (Admittedly, the film’s pace would be a whole lot slower if we had to watch her sitting down to practice any of these).

Unlike the films of Michael Bay, Lucy is a film that is entertaining as opposed to bone-headed in its stupidity. Luc Besson has a good deal of fun setting up sequences with Scarlett Johansson demonstrating her mental abilities, flipping cars during a chase through the streets of Paris, instantly causing a roomful of gun-wielding goons to fall asleep, altering her appearance and manifesting claws, multiple hands and other mutations, being able to see through things and access streams of telecommunications data in mid-air.

You wonder just how far Luc Besson is going to take all of this – he eventually arrives at a cosmic trippiness ending a la John Dies at the End or 2001: A Space Odyssey (1968) where Scarlett Johansson evolves into transcendent consciousness and manages to move throughout time and space. It is cursory and cliched but the sort of thing you wish Transcendence (2014) had done more of with its similar ending. The one thing that does detract from the film is Besson’s crude use of stock animal footage to punctuate the thoughts and feelings that Scarlett Johansson is having.

The main problem with Lucy is the same one faced by any super-powered character – Superman being a noticeable example – and that is that the characters become so powerful it is difficult to create any decent nemesis or tension that works on a relatable level. When a character can literally do anything better than anybody else in the world, where is a story to go from there – Superman comic-book writers had to invent Kryptonite to create some vulnerabilities and dramatic tension. Lucy rapidly becomes so powerful there is literally nothing standing in her way to doing anything, which makes for a rather empty film dramatically. The dramatic highs of the film are just her unleashing cool powers, not her fighting against anybody that has the slightest chance of stopping her. What the film badly needed was the rewriting of her as a villain, a character going up against Superman or some other superhero. She’d make a fantastic nemesis for the X-Men when you think about it.

Luc Besson’s other films of genre note are:- the arty Le Dernier Combat (1983) set in a post-holocaust world where people have become mute; the space opera/action film The Fifth Element (1997); his fantastical interpretation of the historical story of Joan of Arc in The Messenger: The Story of Joan of Arc (1999); the eccentric angelic intervention film Angel-A (2005); Arthur and the Invisibles (2006), a part-live, part-animated film based on his own children’s books about adventures in a land of miniaturized people, and its sequels Arthur and the Revenge of Maltazard (2009) and Arthur and the Two Worlds War (2010); the adventure film The Extraordinary Adventures of Adele Blanc-Sec (2010); and the space opera Valerian and the City of a Thousand Planets (2017). Besson also produced and wrote The Dancer (2000) about a mute dancer who gains expression through a unique sound invention; produced the mystical quasi-sf Quebecois film Chaos and Desire (2002): wrote and produced the End Times serial killer thriller Crimson Rivers II: Angels of the Apocalypse (2003); produced the serial killer film Tristan (2003); produced and wrote the futuristic action film Banlieue 13 (2004) and its sequel Banlieue 13: Ultimatum (2009); produced the serial killer thriller Tell No One (2006); produced the Backwoods Brutality film Frontier(s) (2007); produced the videogame adaptation Hitman (2007); produced the horror film The Secret (2007); produced the animated A Monster in Paris (2011); produced the orbiting prison film Lockout (2012); wrote/produced the English-language Banlieue 13 remake Brick Mansions (2014); and wrote/produced The Warriors Gate (2016) in which a videogamer is transported to Ancient China.