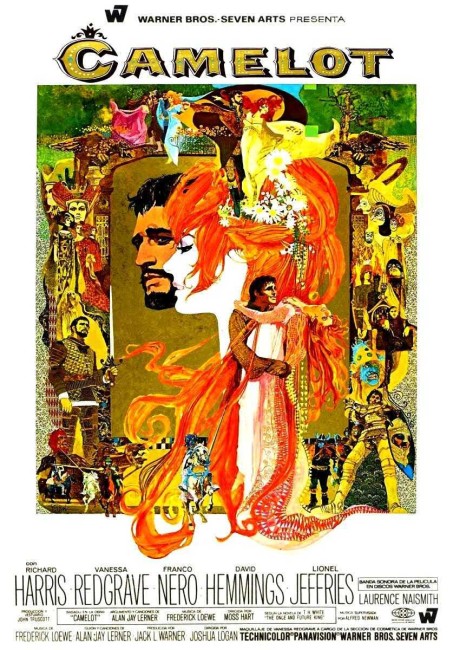 King Arthur sits on a battlefield wondering how events could have gone so wrong to end up there. The magician Merlin appears, asking him to remember what happened. Arthur remembers how he came to meet his wife Guenevere and how he formed the Round Table to unite the disparate political states of England. However, the kingdom started to fall from within when Arthur refused to see the growing and increasingly public attraction between Guenevere and the knight Lancelot du Lac. Then came Arthur’s bastard son Mordred who seized upon the opportunity, determined to draw attention to the seeming infidelity between the two in order to sow unrest and unseat Arthur.

The Broadway musical has always invariably been a form that is pitched for lowbrow appeal. It never aspires to high art, it always takes stories ‘to the masses’ – the emotions engendered and the plots told are always the most simplistic. It is a uniquely American form of art that has been pitched at an undemanding audience. It is an argument that Alan Jay Lerner and Frederick Loewe in their adaptations of Brigadoon (1947), My Fair Lady (1956) (based on George Bernard Shaw’s Pygmalion) and the film of St Exupery’s The Little Prince (1974) exemplifies perfectly – all are based on far more literate stories than have been dumbed down. Their 1960 stage production of Camelot was their thunderously extravagant trashing of the Arthurian cycle and this film version their biggest flop.

Camelot is a sad fate for T.H. White and Celtic mythology to receive. Out the window has gone all the magic of the cycle. The legends have been gutted of fantasy – Merlin only makes a token appearance, out altogether has gone the Holy Grail and Morgan-le-Fay. In return, we get songs muddling on, for pity’s sake, about how the law decrees rain can only fall at night in Camelot, and Vanessa Redgrave on a swing and playing blind man’s bluff, singing about how the month of May is a season for naughty thoughts. The giant cardboard sets and laughably anachronistic costuming are so flatly lit there is never a shred of reality in the whole heavy-handed spectacle.

The script, based upon T.H. White’s four-volume story of Arthur – which also fueled Disney’s The Sword in the Stone (1963) – does hold a few decent ideas. Lerner concentrates the story on Arthur being forced to make choices for the kingdom balanced against his personal sacrifices and how this ultimately leads to his downfall – there is a nicely ironic moment where Arthur realises that he must bow to honour and sacrifice Guenevere to the very courts he himself has introduced to England.

Unfortunately, with Richard Harris’s fey overacting, Arthur comes out as a camp fop. Franco Nero has a stocky handsome woodenness as Lancelot, but at least Vanessa Redgrave – who is never required to do a lot but sit and act like a piece of scenery for the greater part – plays her manipulations with a mischievous twinkle.