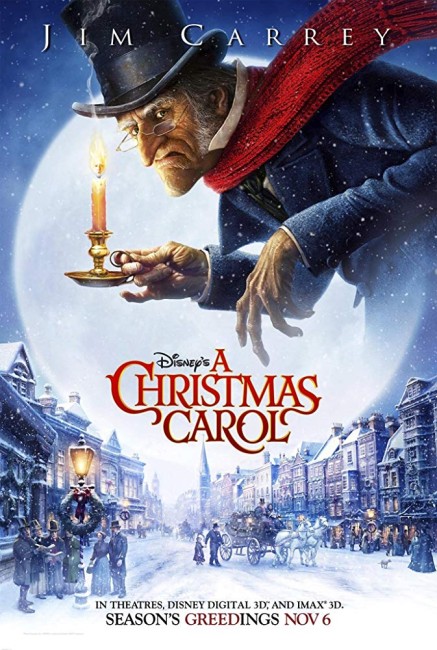 Christmas Eve, 1836. Ebenezer Scrooge thinks only about making money and sneers “bah humbug” to all idea of Christmas spirit and seasonal charity around him. As Scrooge heads to bed that night, he is visited by the ghost of his former business partner Jacob Marley who warns of the dire fate that awaits Scrooge in the afterlife if he does not turn from his miserly ways. Throughout the night, Scrooge is visited by three ghosts – of Christmas Past, Christmas Present and Christmas Yet to Come – who take him on a journey showing him the sentiment in the past that he has forgotten, the suffering of others in the present that he could relieve and the lonely death that lies ahead for him.

Charles Dickens’ A Christmas Carol (1843) is the single most famous Christmas story in the world. It has rarely been out of print and just about every Yuletide season sees an adaptation for the stage in some form. There have been innumerable adaptations for film and television, including a number of modernised versions or translocations of the story into different settings – indeed, A Christmas Carol probably approaches one of the most adapted of all fantasy stories in terms of popularity. (A full list of other screen adaptations is at the bottom of the page). The story’s popularity has been such that the term Scrooge has become a common expression for someone with miserly tendencies and phrases like “bah humbug” have entered popular terminology.

This version of A Christmas Carol comes from director Robert Zemeckis who has a first-rate reputation as a commercial director stretching back to the 1980s with huge hits like Back to the Future (1985), Who Framed Roger Rabbit? (1988) and Forrest Gump (1994) to his name. (A full list of Robert Zemeckis’s other genre films is at the bottom of the page). In the mid-2000s, Zemeckis began to specialise in motion-capture animation wherein actors are filmed on a blank stage wearing suits that transfer their movements into points in the computer that are then translated into animation, resulting in a film that exists somewhere between animation and live-action. Zemeckis did not pioneer the motion-capture animation process, nor was the first person to make a feature-length film in it, but his first effort The Polar Express (2004), another Christmas film, was a hit that carried the idea to the public and saw a great many imitators.

Subsequent to The Polar Express, Zemeckis went onto direct the 3-D motion-capture animated Beowulf (2007) and acted as producer on other such efforts with Monster House (2006) and Mars Needs Moms (2011). A Christmas Carol was Zemeckis’s third motion-capture animated film in a row. With the press junket for A Christmas Carol, he announced plans to conduct a remake of The Beatles’ Yellow Submarine (1968) in the same motion capture 3-D process, although this was cancelled following the flop of Mars Needs Moms. Zemeckis returned to live-action and indeed abandoned fantasy for true-life subject matters for his subsequent films Flight (2012) and The Walk (2015), as well as the fictional WWII drama Allied (2016). He did subsequently return to motion-capture animation to bring a village of dolls to life in the true-life based Welcome to Marwen (2018).

A Christmas Carol is such a familiar and oft-told tale that one wonders what new things Robert Zemeckis can possibly find to say with his big budget animated version (for which Disney purportedly stumped up something in the neighbourhood of $200 million to make). It is such a familiar tale now that the film feels like a classic Golden Oldie song where you can sing along to the lyrics and know every beat off by heart. This was not even the first animated version of A Christmas Carol but something like the sixth. What Robert Zemeckis does offer is the first version of A Christmas Carol in 3-D and where he stated that he decided to make this scarier than other versions. This still does not seem much to distinguish A Christmas Carol 2009 from the other versions.

Certainly, Robert Zemeckis does some things extremely well with A Christmas Carol. He is extremely faithful to the Dickens text to the point of frequently using the dialogue as it is written and keeping to the descriptions of the ghosts (unlike other film versions) – like the Ghost of Christmas with a head like a candle flame and carrying a metal cap; or the Ghost of Christmas Present as a jovial giant dressed in green robes and his speech about his brothers before dying.

By now, Robert Zemeckis has become such a master of the 3-D form that his work is light years ahead of all the competitors – see other animated efforts like Meet the Robinsons (2007), Bolt (2008), Cloudy With a Chance of Meatballs (2009) or Ice Age 3: Dawn of the Dinosaurs (2009), which are still stuck down at the level of popping novelty items out of the screen at people. There is a flawlessly lovely pan through the streets and skies of Victorian London as the film opens, while the backgrounds beyond Scrooge’s window are filled with beautiful depth-focused snowbound streets. Although for some reason, the film looks very dark and gloomy – as though it had been shot by candlelight. I, at first, thought that this was the 3-D glasses but taking these off seems to make no difference.

The other thing that Robert Zemeckis does very well in this version is his portrayal of Scrooge. This is Scrooge the way he should be – bony and angular, physically feeble, venomously mean and lacking in any compassion for others. Surprisingly, Jim Carrey (a notoriously bad over-actor who seems to shout most of his performances in an audience’s face while dangling from the rafters) does well in the part. Indeed, did the film not laud Jim Carrey’s name on all the posters and prominently on the credits, you would be hard pressed to guess that Carrey is in the film – he seems to have so well subsumed himself into the role of Scrooge and the accent that it is impossible to tell. Finally, it seems, that Jim Carrey has mastered the art of character acting and seems to physically inhabit the role, while restraining his characteristic tendency to overplay. Good also is Gary Oldman who appears distinctly recognisable as a diminutive, timid Bob Cratchit and much less recognisable in roles as disparate as Tiny Tim and the ghost of Marley.

Jim Carrey also plays all three Christmas ghosts. These unfortunately, though they are accurate to Dickens descriptions, are disappointing. The candle-flame headed Christmas Past is wimpy. The giant and jolly Christmas Present has much more presence but you keep thinking throughout the sequence that what you are seeing is a giant-sized version of Robbie Coltrane’s Hagrid from the Harry Potter films. Christmas Yet to Come emerges effectively, due to the fact that what Zemeckis (and the directors of all other A Christmas Carol adaptations) are drawing on is classical Death imagery.

For all that, Robert Zemeckis merely retells A Christmas Carol but does not redefine it. That makes his version an efficient adaptation but one where we have seen most of everything before and he offers little that is new. One thing that Zemeckis does do is blow the film up to large scale with animated effects set pieces. These feel impressive but unnecessary. Did we really need the Christmas Present episode to take place with the entire house touring London and the floor suddenly becoming transparent so that Scrooge and the Ghost can look down at everything as though it were happening on a tv screen? Why could they not have just walked through the various scenes as they do in every other version? The sole reason seems to be the interesting texture that the idea of a quasi-transparent floor allows in 3-D.

Similarly, the sequence with the Death-like Christmas Yet to Come takes place as an overblown action sequence where Scrooge (who for some reason becomes miniaturised part way through) is chased through the streets by the Ghost’s black horses and coach, where Zemeckis even throws in pieces where Scrooge falls on his back in mid-flight and stops and rolls a barrel of wine with his feet, or of him tobogganing along on a broken icicle. Robert Zemeckis has a history of harnessing special and visual effects and pushing the envelope with new technologies, but there is the sense here that he has blown the story up with these sequences to show off – even when the story did not need them.