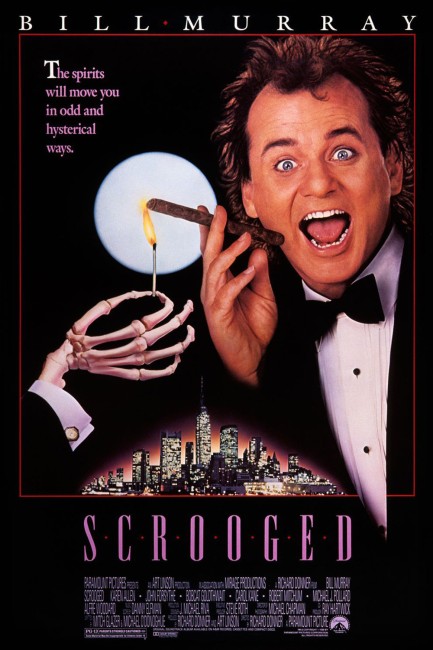 Frank Cross is the ruthless president of the IBC tv network. As he oversees the production of a live adaptation of Charles Dickens’ ‘A Christmas Carol’ for the holiday season, Frank’s ruthlessness begins to catch up with him. On Christmas Eve, he receives visits from three ghosts – of Christmases Past, Present and To Come. They show him the good times in his past that he has forgotten and the misery he causes in the present then offer him the chance to turn from his heartless ways.

Charles Dickens’s A Christmas Carol (1843) has become a filmic perennial with some 30+ adaptations having been made, most for tv. (See below for a listing of these). Scrooged is an amusingly hip modern rendering. It comes from director Richard Donner, who was then riding on the successes of big mainstream genre films such as The Omen (1976), Superman (1978), Ladyhawke (1985) and the previous year’s non-genre buddy cop hit Lethal Weapon (1987). (See below for Richard Donner’s other genre films).

Scrooged is clearly an adaptation of A Christmas Carol that has been retooled in the light of the then-recent successes of Ghostbusters (1984) and Beetlejuice (1988). This is made even more obvious with the casting of Ghostbusters star Bill Murray as the Scrooge counterpart. Bill Murray’s irreverent, outrageous playing is certainly well employed. And there are some fine effects involved in turning John Forsythe into a decrepit corpse (as the Jacob Marley equivalent) and in creating the Ghost of Christmas to Come as a giant twelve foot Angel of Death that hides tortured souls inside its cape.

So why then does this version of the tale come off as a disappointment? For one, the redemption of a miser theme seems eclipsed and trivially outdated by some of the more contemporary issues the film throws in – the homeless, the Bomb, acid rain. And, other than a highly amusing opening sequence showing a excerpt from a Christmas special starring Lee Majors, Santa Claus and machine-gun armed elves, the humour is uninvolving. Instead there is a tendency, particularly with the casting of David Johansen, the completely whacko Bobcat Goldthwait from the Police Academy films and Carol Kane’s terrible overplaying, to let slapstick run riot.

In the end, Bill Murray seems miscast too. Bill Murray is a fine comic actor whose success comes in playing dripping sarcasm, not in becoming a nice guy – he is fine when it comes to the miser role but when he repents he is far too outrageous to seem convincing as though, just like the doll baby he pretends to drop, he’s going to burst out any second with a “Hah, had you fooled.”

Richard Donner’s other genre films are:– the classic anti-Christ film The Omen (1976); Superman (1978) and uncredited parts of Superman II (1980); the fine Mediaeval romantic fantasy Ladyhawke (1985); Radio Flyer (1992), an interestingly Spielbergian film about child abuse; the lame conspiracy/paranoia comedy Conspiracy Theory (1997); the time travel film Timeline (2003); and Superman II: The Richard Donner Cut (2006), his originally intended edit of Superman II (1980), which he had been removed from after much in-fighting with the producers. In recent years, Donner has less interestingly preoccupied himself with the bland Lethal Weapon films. Donner also acts as producer on The Lost Boys (1987), the horror anthology tv series Tales from the Crypt (1989-96) and its two film spinoffs Tales from the Crypt Presents Demon Knight (1995) and Tales from the Crypt Presents Bordello of Blood (1996), Delirious (1991) about a writer trapped inside his own soap opera, the monster hunter film Matthew Blackheart (2002), the voodoo film Ritual (2002), and the comic-book adaptations X-Men (2000), Constantine (2005), X-Men Origins: Wolverine (2009) and X: First Class (2011).