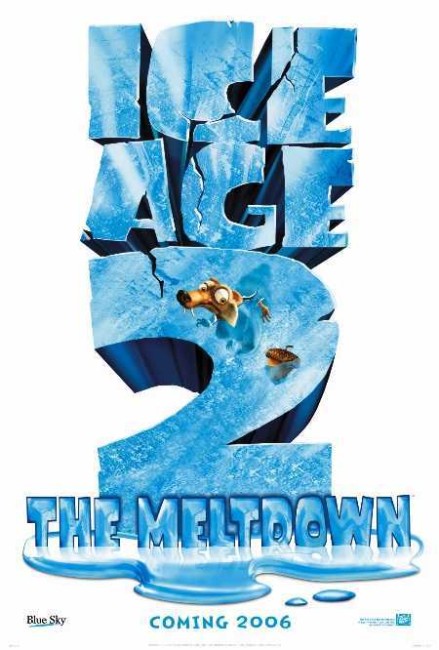 aka Ice Age 2: The Meltdown

Manny, Diego and Sid discover that global warming is causing the wall of ice that surrounds the valley to melt and that the entire area is about to flooded in water. A vulture tells them of a boat that supposedly exists at the opposite end of the valley and so the animals set out on an expedition to safety. Manny also realises that mammoths are becoming extinct and that he is the last of the species. Along the journey, they come across two possums accompanied by a female mammoth Ellie who believes that she is a possum. The possums join the expedition. While the others try to push Manny together with Ellie for the sake of propagating the species, he cannot get around her refusal to see that she is a mammoth instead of a possum. Meanwhile, Sid has discovered that Diego the fearless tiger has a fear of water. At the same time, the thawing ice has also unleashed two prehistoric predators that are hunting the expedition from beneath the rising waters.

It is clear that Blue Sky are Pixar wannabes. While enjoyable, Ice Age and Robots both seem like they go much of the way towards but fail to fully capture the magic that Pixar’s films have. If you look beneath their overall amiability, Blue Sky’s films are formulaic. While Ice Age and Robots get by on general likeability, Ice Age 2 seems all formula. The plot seems an assemblage of predictable character arcs – the two mammoths that you know are going to get together despite their initial prickliness; Diego the tough sabre-tooth tiger who refuses to acknowledge his fear or water and eventually has to conquer this to become the hero of the day; the artificial suspense sustainer of the impending flood forcing the animals to have to flee (and the flood having been given the additional, entirely generic menace of two thawed-out predators lurking beneath the waters).

Other elements only seem borrowed – Queen Latifah’s Ellie, who refuses to acknowledge she is a mammoth instead of a possum, seems too much a copy of Ellen DeGeneres’s amnesiac fish in Finding Nemo (2003). The plot about the exodus across land away from the natural disaster seems photocopied from Disney’s Dinosaur (2000), which in turn was uplifted from Don Bluth’s The Land Before Time (1988).

Everything in Ice Age 2 feels as though it had been generated by an automatic script-compiling device. The film is largely stolen by the endearingly longsuffering squirrel and his struggle to retain his acorn who this time has several comic set-pieces interspersed with the main action. These squirrel scenes are the most appealing in the film. Other comic set-pieces – like Diego’s attempts to catch the possums as they keep popping up out of their holes and the sequence with Sid being acclaimed the Fire King – come across as silly. Other parts like the scene with the animals caught on a series of rotating rocks have an entirely mechanical feel to them as though the scene has been transplanted in from a computer game.

Blue Sky have shown that they can give Pixar and DreamWorks a good run for their money – both in terms of turning out decent animated films and achieving reasonable success at the box-office. Ice Age 2 is the first fall from the grace they have enjoyed so far. One only need compare the routine feel of Ice Age 2 with Pixar’s following their own work up with the confident and heartfelt Toy Story 2 (1999) to see the difference between the two animation studios. To win out, Blue Sky need to make films that catch the audience’s heart as Pixar’s work does, not make films that feel like they exist for no other reason than to make money at the box-office.