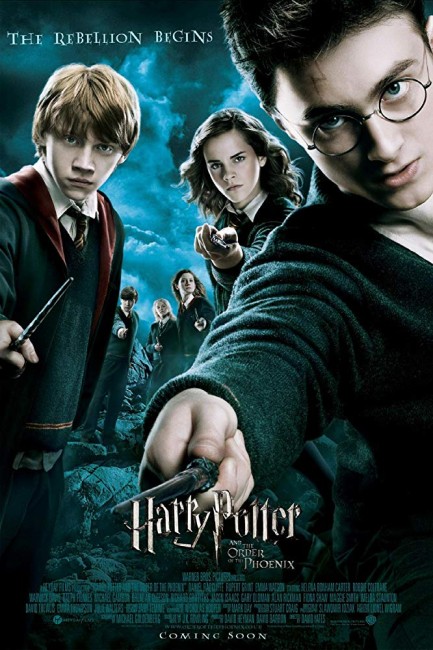 While back at home with the Dursleys for the holidays, Harry Potter is being bullied by Dudley Dursley when he is attacked by a Dementor and has to use a Petronus Charm to ward it off. Harry is quickly whisked away to the Order of the Phoenix, a secret society set up by Professor Dumbledore. Cornelius Fudge, the head of The Council for Magic, has been seeking to blacken Harry and Dumbledore’s names in the press and ridicule their claim that Lord Voldemort has returned. The Council places Harry on trial for using magic in front of a muggle, however Dumbledore comes to Harry’s defence and he is acquitted. Back at Hogwarts, the Ministry instates Dolores Umbridge as the new Defence Against the Dark Arts teacher. Umbridge uses her authority to forbid the teaching of any defensive spells and cracks down on discipline throughout the school with an iron fist. Harry secretly gathers a group of the other pupils and begins teaching them defensive spells to prepare for the coming war against Lord Voldemort.

I have never been a huge fan of the Harry Potter books or films. You have to credit J.K. Rowling for the fact that she managed to get children reading again in an era of increasing illiteracy. However, there are other children’s books that are far more deservous of such success. Rowling’s writing tends to the simplistic and over-written. Her plotting is heavily reliant on contrived and convenient deus ex machina. The films, particularly the first two, tended to bury the stories under a surfeit of visual effects, while the increasing length of Rowling’s books (some of the later ones have headed up towards Stephen King-sized tomes clocking in at 700 plus pages) have meant that the films have come across as hurried in their plotting or with elements that seem confusing to those in the audience who have not read the books first.

Harry Potter and the Order of the Phoenix opened to some rather negative “Has Harry Potter lost its magic?”-type reviews. The film was called too dark – clearly by people who have never read the book it is based on – and David Yates’s direction lacking in imagination. Contrary to any of these, I liked Harry Potter and the Order of the Phoenix. In fact, I would go so far as to argue that it is the best film in the series so far, even surpassing Alfonso Cuaron’s The Prisoner of Azkaban, which remains the popular favourite by general consensus.

There are some very good things to report about Harry Potter and the Order of the Phoenix. It feels like the first of the Harry Potter films to have grown up. While the other Harry Potter films seem caught up in the child-like wonderment of magic tricks and cute effects flying around quidditch fields and the like, this is the first of the films to have placed its focus not on the effects but on the emotions of the characters. (Not that The Order of the Phoenix denies the effects side of things, but they are not allowed to overtake the story as they did in Chris Columbus’s two entries).

The emotional journey that the film takes us on is a very dark one. Where the characters tended to fairly black-and-white in the earlier films; here their journey contains a good deal more in the way of shades of grey and confronts some adult issues. If you want comparisons, you could say that The Order of the Phoenix is to the other Harry Potter films what The Empire Strikes Back (1980) was to Star Wars (1977) – a work that took the light adventure focus of the first film into darker, much more interior and soul-searching places. I particularly liked the speech that Daniel Radcliffe makes where he starts to teach the pupils, telling them there is a difference between what they learned as lessons in class and in having to use this to fight for their lives.

Furthermore, The Order of the Phoenix is the first of the Harry Potter films that feels that it works satisfyingly as a story. All of the other films had the feel of being adapted from a book. They often felt like they were hurrying over plot points to bring the film in at a reasonable running time, either that or they dragged dramatically because the film was adhering too faithfully to the book. This is not something you feel you could ever say about The Order of the Phoenix. It feels like a story that exists in its own right as a film. Nor does J.K. Rowling’s writing seem as driven by convenient plotting deus ex machinas as it usually does. You can see the centaurs and Grawp the giant being set up early on in the piece and they conveniently do turn up to get Harry and company out of a scrape, but the rest of the film comes with a feeling of natural dramatic ease.

The Order of the Phoenix is also the first of the films to give more time over to the minor supporting characters and allow them depth and growth. The new character introduced this time is Imelda Staunton’s Dolores Umbridge. Staunton has been made up with the primness of an old dear attending a Country Women’s Institute – in an appealing touch, the wall of her room is filled with decorative plates that all feature animate cats. Staunton moves through the film with head held high, perfect manners and a self-satisfied smile, while at the same time wielding authority with an iron fist that would make George Orwell’s O’Brien take a few steps back. She also plays with a peculiar titter at odd moments in a way that manages to be quite unnerving. She gets my vote for Best New Villain(ess) of the Year.

For all the criticism that has been made of British tv director David Yates’s handling of The Order of the Phoenix, there is nothing I can fault in his dramatic staging. (I would far rather watch another film by David Yates any day than by the perpetually banal Chris Columbus). The scenes with Harry and apprentices being cornered in the aisles of a Ministry basement by Lucius Malfoy and Bellatrix Lestrange comes with a palpable sense of danger. And Yates gets it all together for a dazzling climactic magic battle between Dumbledore and Lord Voldemort.

There is also the growing sense throughout the story of storm clouds growing on the horizon. It’s the same sense of epic destiny that ran throughout the The Lord of the Rings trilogy, of tiny vulnerable heroes standing up against forces vastly larger than they as the pieces of a jigsaw are positioned into place for a titanic showdown between good and evil. For the first time, I’m excited to see the next Harry Potter film.