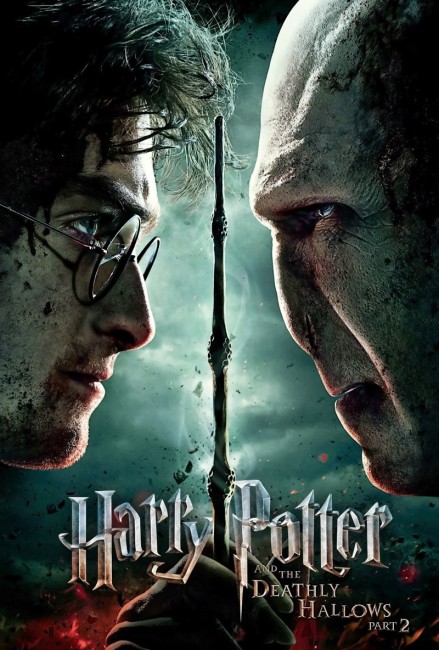 With the aid of the goblin Griphook, Harry, Ron and Hermione conduct a break-in to the Gringotts bank to destroy the horcrux sequestered in Bellatrix Lestrange’s vault. Harry realises that a horcrux is hidden somewhere on the grounds of Hogwarts. He and the others sneak back in to find that Severus Snape, now the new headmaster, has the school under an iron fist as he determines to find Harry. Harry instead rallies the students to drive Snape out. They prepare the magical defences as Lord Voldemort and his army arrive determined to break in. As more secrets about his past are revealed, it becomes apparent to Harry that the last horcrux is a part of himself and that in order to kill Voldemort he must sacrifice his own life.

When it came to filming Harry Potter and the Deathly Hallows (2007), J.K. Rowling’s final work in the series, the producers made the choice of splitting the book into two films. The ostensible reason given for this was that the greater running time would allow more room to tell all the aspects of the story that needed to be told, even though Deathly Hallows was shorter than some of the other Harry Potter books, which all managed to be squeezed into a single film apiece. One suspects a large part of the reason for this was commercial – that ever since the success of the Harry Potter and The Lord of the Rings films, filmmakers have hit onto the idea of creating multi-story franchises that can hook audiences to come back for successive chapters.

Some series have found their otherwise lucrative continuation thwarted by the limitations of the source material and have now started trying to manufacture further instalments by splitting single books in two – see the likes of Twilight‘s Breaking Dawn Part 1 (2011) and Breaking Dawn Part Two (2012); while the Lord of the Rings prequels managed to get three films out of one book with The Hobbit: An Unexpected Journey (2012), The Hobbit: The Desolation of Smaug (2013) and The Hobbit: The Battle of the Five Armies (2014). By the time that The Hunger Games and Divergent series rolled around, the splitting of the last book of the series into two films had become de rigeur. Given that each entry in these respective series is earning in the hundreds of million of dollars, you can see the clear commercial intent behind stretching the material as far as possible to earn another truckload of box-office returns.

I have never been a huge fan of the Harry Potter films. I deplored Chris Columbus’s visual effects overkill on the first two entries, although the series began to improve after that point. The last four films were placed in the hands of British director David Yates. Yates’s work on the Harry Potter series has been uneven, having swung between some of the best entries in the series (The Order of the Phoenix) and others that seemed to miss the boat (Half-Blood Prince). David Yates sits at almost the opposite extreme of Chris Columbus and eschews a focus on big effects scenes for their own sake and concentrates on character, taking the stories further and further down into an emotional darkness. To this extent, Yates has consistently reduced the lighting levels of the films to the point here where the entire film seems to take place in a singularly dank and sombre gloom – before they enter the bank here, Hermione says “good morning” to someone but going by the lighting levels, it would still seem to be in the deepest of night.

Harry Potter and the Deathly Hallows Part 2 starts slowly. (The saga has become so involved that you are grasping at trying to follow details that have often been skipped by the films – as Deathly Hallows Part 2 opens, for instance, it is confusing trying to work out where the character of the goblin Griphook came from and why Harry and the others are holding him prisoner). The venture into Gringotts works okay, although often seems filled with effects set-pieces that belong more in a Chris Columbus film, involving as it does rampaging dragons, vertiginous rollercoaster rides down into the depths of caves and the group struggling through being buried in trinkets as the Gemino curse multiplies every item in the vault.

It is not until the film returns to Hogwarts that it starts to find its dramatic feet. The driving of Snape from the university holds something rousing that finally kicks the film into an emotional uplift (not to mention gives Maggie Smith a welcome opportunity to command the show for herself). Then starts the war where it is clear that David Yates has taken inspiration from Peter Jackson’s staging of the Battle of Helm’s Deep in The Lord of the Rings: The Two Towers (2002) in creating epic-sized scenes of massed armies charging, fireballs assailing the forcefield, bridges blowing up, giants striding through the courtyard and the like. It is here that the series finally arrives at the epic-sized battle that it has been promising to for the last several chapters.

One must also grudgingly state that all of this looks good in 3D – a gimmick that I have regarded as a curse on contemporary filmmaking – with dazzling shots of fireballs and the like coming out of the screen. There is particularly good post-opening credits shot where we emerge from out of the clouds into a shot of Hogwarts seen through the mist with Dementors hovering in the sky above that makes you cry out with joy.

The battle scenes are epic but I feel that the real strength of Harry Potter and the Deathly Hallows Part 2 is the depths of characters. There is some exceptional writing during the scenes where Harry realises he must sacrifice his own life in order to bring Voldemort down and goes off to surrender to his destiny or in the scenes where Harry meets Dumbledore in the afterlife, before the return for the climactic showdown. Both David Yates and J.K. Rowling take these into some surprisingly dark and mature areas and the cast members prove to be on top form. As J.K. Rowling stated when she wrote the book, she wanted it to be a story about confronting death – the feeling at the end of the film is of characters shattered and bruised finally emerging into the light blinking to realise they have won a war. About the only scenes that fail to work is the attempt to replicate J.K. Rowling’s epilogue where the digital effects used to show the characters nineteen years older ends up at best making some of the actors appear around the age of 25.

On the minus side, there are times where the film suffers from J.K. Rowling’s contrived plotting. The series has continually flipped and flopped over whether Severus Snape is good guy or bad guy and this is finally resolved here. I had the surprise spoiled for me beforehand by overly helpful Harry Potter fans. That said, I don’t feel that this works on screen with the epic tragedy that it should have. The flashback scenes that explain Snape’s backstory tend to be lacking in the heartbreakingly unfulfilled romance that you feel this should have been. Not to mention that during these flashback scenes Alan Rickman, who has played the role of Snape with a haughtily contemptuous sneer in which he allows everything he says to drip with mellifluously acidic tones, makes a sudden turn to craven and cowering that seems decidedly out of character. The explanation about everything having been a ploy to set things up to trap Lord Voldemort seems exceedingly complicated – it is Agatha Christie-type plotting where the individuals involved appear to have the foresight to predict how people will act years in advance and be able to guide events towards a specific conclusion where no random unplanned events ever have the ability to throw plans awry.

In being the last of the Harry Potter films, the production team have made an effort to bring back just about every actor who has appeared in the series beforehand, including several of those that have been killed off such as Michael Gambon and Gary Oldman. This is taken to the extent that some of those present – Miriam Margolyes, Emma Thompson, Jim Broadbent, Timothy Spall, Katie Leung, Helen McCrory – don’t even get any lines. About the only name actors absent are Brendan Gleason and Kenneth Branagh. David Yates keeps the cameos to the background so as not to intrude into the drama, although several of those present – notably Maggie Smith and in particular Matthew Lewis whose Neville gets to be the unexpected hero of the show twice – take the opportunity to shine and go out in glory.