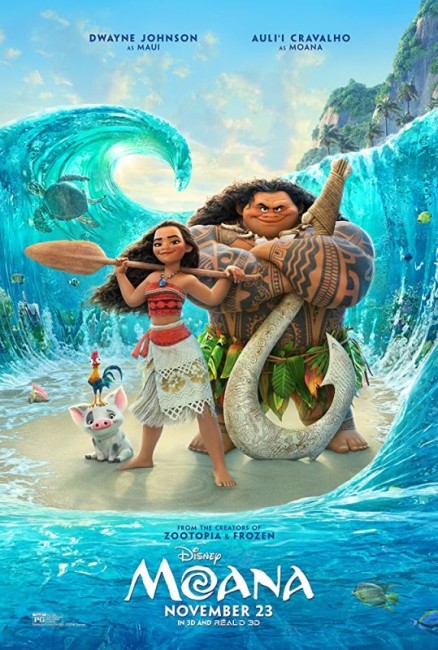 Moana grows up the daughter of the chief of the tiny Pacific island of Motonui. She discovers that she has a strange affinity with the sea and it brings to her a green stone, which she realises is the heart of the goddess Te Fiti that was stolen by the demi-god Maui. The island is being afflicted by a blight that has rendered the fishing grounds barren and caused the coconuts to produce no milk. Moana believes that the only hope is to go on a journey beyond the reef but her father forbids any of the village to do so. However, Moana’s grandmother shows her the cave that contain the canoes of their ancestors, revealing that they were once great voyagers. Defying her father, Moana decides to set forth on a canoe and return the stone heart to Te Fiti and stop the blight. The canoe takes her to the island where Maui has been kept prisoner. Freed, he reluctantly takes Moana with him and sets about regaining his magical fishhook that grants him the ability to shapechange. Moana tries to persuade the carefree and self-absorbed Maui of the necessity of returning the heart to Te Fiti to save them all, although he is fearful to do so.

Moana was the 56th animated film from Disney. In the mid-1990s, Disney made a studied effort to start diversifying their animated product, heralding too many complaints that their films reflected only a whitebread image. During that period, we began to see the studio making efforts to embrace diversity and depict more in the way of different cultures – the Native American Pocahontas (1995), the Chinese Mulan (1998), the Hawaiian setting in Lilo & Stitch (2002) and the first African-American heroine in The Princess and the Frog (2009).

I was interested in Moana (even if the film’s trailer completely turned me off wanting to watch the film). It draws on the culture that comes from my former neck of the woods. I grew up in New Zealand, which has a sizeable Maori and Pacific Island populace. Maui is a central figure to Pacific Island mythology and appears in the cultural tales of the Maori and the peoples of Hawaii, Samoa, Tahiti and Tonga. Common to each of the cultures are the stories of Maui fishing the islands up from the ocean, stopping the sun and discovering the secret of fire. I can remember being taught the stories when I was back in school. It wasn’t part of my culture necessarily but it was a central part of the oral history of the people whose zip code I lived in.

And then there is Moana the film. It has been a huge success story for Disney. Despite only being released in December, it is as of this writing the eleventh highest-grossing film of the year, having earned nearly $500 million at the worldwide box-office and been nominated for an Academy Award for Best Animated Film and several critics’ society end of year awards. It has had a good deal of praise heaped on it, it currently holding a 95% fresh rating at the Rotten Tomatoes critical aggregator. With all of this, I expected to be singing the film’s praises but contrarily have to stand in a critical minority in having disliked it.

Part of the problem with the film is its directors John Musker and Ron Clements. Musker and Clements started working together as co-directors on the charming The Great Mouse Detective (1986) and followed this with the enjoyably energetic The Little Mermaid (1989), which launched the Disney renaissance of the 1990s. Subsequent to that they made the hit Aladdin (1992), which paved the way to a regrettable trend that has grown to take over much modern animation and family entertainment – of allowing fantasy and fairytale milieus to be overrun by hip modern jokes, one-liners and contemporary pop culture references. Musker and Clements’ subsequent animated films Hercules (1997) and Treasure Planet (2002) both embodied this to an even greater extreme in which they drag everything down to a level of irritatingly glib one-liners and pop culture jokes, although The Princess and the Frog did seem to be promisingly reversing the trend.

On one hand, Moana left me feeling that an assiduous effort had been made to respect Pacific Island culture with experts having been brought in to consult. The background designs, the cultural tattoos, the costumes look authentic (even if the film has assimilated all of Pacific Island culture into a single monolith whereas in actuality this encompasses everything from Hawaii to New Zealand, an area stretching some 4500 miles in distance, roughly equivalent to the distance between England and the USA). The casting for the film has made an assiduous effort to have Pacific Island peoples in the speaking parts (principally Hawaiian and New Zealand actors), although this does seem somewhat belaboured with the casting of Dwayne Johnson who is American born and raised but merely has a Samoan mother.

This touches on some of the problems one has with Moana, which I’d accuse of cultural appropriation. This is a term that has sprouted up to refer to the borrowing of art, clothing or rituals from ethnic cultures without any concern for the origin or wider meaning they held in the originating culture. Examples might include the popularity of Chinese characters in tattoos, the stylistic borrowing of ethnic clothing, the selling of mass-produced cultural art, not to mention the pillaging of aspects of world religions by the New Age movements. Moana is a film that pays much in the way of lip service and respect to Pacific Island culture but ultimately is a piece of cultural appropriation that exists primarily to make money for Disney shareholders. The clear evidence of such is surely shown by the sheer tastelessness of the fact that they initially marketed a costume where kids could wear a skin suit with Maui’s tattoos and grass skirt before this was promptly withdrawn.

The main problem with the film is that it is a supposedly sensitive portrait of a culture that has been placed into the hands of two directors who are the wrong people for it. Musker and Clements’ body of work consists of films that are lightweight and are largely driven by one-liners and pop culture jokes. They pay a reasonable respect to Pacific Island culture but in the end it is pushed off to the side and the central roles are inhabited by Dwayne Johnson and Auli’i Cravalho, two actors who have been chosen for their standard American accents – the effect on-screen is more one of stand-ins for white audiences mixing among the natives.

In the film, Maui is less the trickster god of Pacific Island legend than he is just a cliche brattish upstart who needs to learn the nature of his own hubris, not too different to Hercules in Musker and Clement’s Hercules. Maui is also outfitted with a series of gratingly hip one-liners and jokes – modern colloquial lines like “didn’t see that one coming” and “do me a solid” or joking about his ripped bod and how he wants to get back to celebrating his own awesomeness. Upon first meeting Moana, his first reaction is to offer to sign an autograph.

Moana is a lightweight offering. It passes colourfully, there are quite a number of unmemorable songs but in the end most of it fairly soon passed into forgettability. Even the plot seemed exceedingly inconsequential. Moana sets out on her voyage with Maui, after undergoing a standard bildungsroman leaving the village for the world beyond the hill, and undergoes encounters with a mildly amusing Jemaine Clement as a talking crab, a flotilla of coconut pirates (who we are never given any explanation for) and then a big showdown with a lava monster. There’s the routine McGuffin of Te Kiti’s heart that drives the story but this seems like little more than a standard magic stone that needs to be replaced before the Big Evil of the show envelops everything. There is little that stands out about it as a film.

Moana also makes a cameo appearance as one of the Disney princesses in Ralph Breaks the Internet (2018).