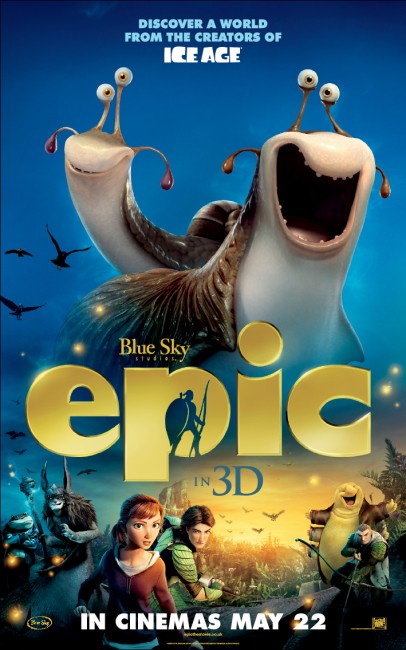 Teenager Mary Katherine, or M.K. as she prefers to be known, goes to stay with her father. He is obsessed with proving the existence of a race of very small people that live in the woods. M.K. thinks this is crazy and tries to convince him to give up on such a fruitless endeavour. Among the Leaf People in the woods, Queen Tara is about to undergo the ceremony to choose the pod that will be her heir. However, Mandrake, the leader of the Boggan insect creatures that also live in the wood and spread only rot and decay, plot to allow the pod to be tainted by darkness. Tara flees from the Boggan attack just as M.K. goes for a walk in the woods. M.K. sees the tiny queen fall. Using her magic, Tara reduces M.K. to her size and gives her the pod for safekeeping. Saved by the novice Leaf Man warrior Nod, M.K. passes through the bewildering world of the Leaf People. There she must ensure the pod hatches under the light of full moon, while protecting it as Mandrake sends his warriors out to ensure its corruption.

Epic was the eighth animated film from Blue Sky Studios who have risen through the 00s to become one of the leading commercial US animation studios. Blue Sky showed promise with their first couple of films, Ice Age (2002) and Robots (2005). Thereafter though, about the time they started to gain a name, their work slipped towards formula with the likes of Horton Hears a Who! (2005), Rio (2011), The Peanuts Movie (2015), Ferdinand (2017) and Spies in Disguise (2019), as well as an interminable number of interchangeable Ice Age sequels – Ice Age 2 (2006), Ice Age 3: Dawn of the Dinosaurs (2009), Ice Age: Continental Drift (2012) and Ice Age: Collision Course (2016).

Epic was the second solo film from Chris Wedge, who co-founded Blue Sky and co-directed Ice Age, solo directed Robots and has acted as a producer on everything else they have put out. Epic is based on The Leaf Man and the Brave Good Bugs (2011), a children’s book by William Joyce. Joyce’s books have been adapted into other animated films such as Meet the Robinsons (2007) and Rise of the Guardians (2012) and the animated tv series Rolie Polie Olie (1998-2006) and George Shrinks (2000-1). Joyce has also been strongly involved in these and has done other work on film with concept artwork for early Pixar films like Toy Story (1995) and A Bug’s Life (1998), graduating to production designer and producer of Blue Sky’s Robots and as animator for the opening credits of Mr Magorium’s Wonder Emporium (2007).

I felt little enthusiasm for Epic before sitting down to watch. Blue Sky’s films have become formulaic and processed to the point that they had eliminated any originality or spark of life. The film floated around under the title The Leaf Men for a couple of years before being retitled as the meaningless Epic – an adjective the resulting film fills well short of – which cannot help but immediately remind one of the disastrously unfunny Epic Movie (2007).

The basic premise of a human being shrunken down to miniature size and having adventures with the faerie/insect folk in the garden/woods is one that we have seen in films like Fern Gully: The Last Rainforest (1992), The Ant Bully (2006) and Arthur and the Invisibles (2006). The plot has been written to generic tropes – the evil dark lord and his minions; the requisite touch of romance between the heroine and cocky young hero; the fantasy McGuffin of the pod that has to be hatched at a particular time or the world will fall into darkness; the hero(ine) discovering her role as predestined saviour; the comic supporting characters; the pro-environmental message that comes in exceedingly simplistic black-and-whites.

Epic is a film where you cannot deny that much has been placed into it artistically at the same time as the delivery of everything on a story and dramatic level kills it off. In the opening scenes that introduce us to the world of the Leaf People, you can see a great deal of creativity has gone into designing the denizens and their costuming and armouring all based around plants – the initial concept illustrations for the film would have been amazing – but this falls flat as soon as Beyoncé Knowles and others open their mouths and let hip contemporary colloquialisms slip out.

Chris Wedge and the animators create some visually impressive action scenes, flying around on birds, battling the Boggan, venturing back into the giant-sized house and so on, but these seem so obviously designed as kinetic set-pieces for the 3D camera that they become no more than eye candy. There are some pretty moments – the journey through the forest by deer – but you are constantly aware the film is prodding you to go “awww”.

Even the names among the voice cast – Beyoncé (or Bouncy as my ex’s kids liked to refer to her), Aerosmith’s Steven Tyler and the rapper Pitbull – seem chosen more with an eye towards the soundtrack album than necessarily the performances they give.