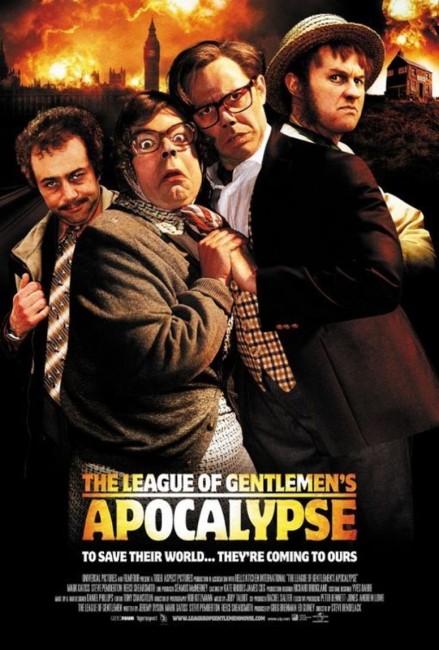 The residents of Royston Vasey experience a series of apocalyptic events. Reverend Bernice Woodall reveals a series of frescoes in the basement of the church that show that these are the signs heralding the end of the world. She produces the key to a never-opened door but instead three locals, deranged butcher Hilary Briss, the German Wolf Lipp and Geoff Tipps, sneak through. They find themselves in the real world where they realize that they and Royston Vasey are fictional creations in the tv series ‘The League of Gentlemen’ and that the apocalypse is due to the creators of the show, Jeremy Dyson, Mark Gatiss, Steve Pemberton and Reece Shearsmith, having decided to bring the series to an end. They make their way to London in an effort to stop them doing so. There they abduct Steve Pemberton and send Herr Lipp to impersonate him. In reading Steve’s script for a new show, a horror story set in Medieval times, Geoff accidentally writes himself into it where he is declared a hero for saving the king from being poisoned by an homunculus created by the sorcerer Pea and a cabal of conspirators. As Herr Lipp and Hilary Briss hatch a plot to drag the other two writers into Royston Vasey, the town is invaded by Pea, threatening to unleash creatures of black magic.

I must admit to never really having warmed to the League of Gentlemen, even though they have a fanatical following – indeed the show won the No. 3 spot on the UK’s Channel 4 poll to find the 50 greatest comedy sketches of all time. The series – and certainly the film here – seems centred around a good deal of vulgar humour. It seemed not a lot more than a rural British comedy drama like say The Vicar of Dibley (1994-2007) as reworked by the Wayans Brothers. It is telling that the Gentlemen name the town of Royston Vasey in tribute to the given name of Roy ‘Chubby’ Brown, the acknowledged crudest comedian in England – it is Roy Brown that the League of Gentlemen are acknowledging rather than any of the other classic British comedians like Spike Milligan, Smith and Jones or the Monty Python’s.

I do not wish to come across as seem a prude by any means – indeed I laughed myself silly at various early John Waters films, South Park (1997– ) or some of the Farrelly Brothers comedies – but I find it tiresome when filmmakers throw in a fart or a flouncing caricature of a gay person, cover someone in bodily fluids, have some say ‘cock’ and expect that that in itself is funny. The Scary Movie films – see Scary Movie (2000) – are a perfect example of how deadeningly unfunny this is. To me, real comedy has a punchline where such things may be part of the gag, not are the be all and end all of the gag in themselves.

As the series did, the film frequently makes in-reference to various other films – there is a parody of the wall of arms sequence from Beauty and the Beast (1946) and of the homunculus from The Golden Voyage of Sinbad (1973). There are a few CGI creatures and, while these are not hugely convincing as effects, they are sufficient for what the film requires of them.

The film’s one novel spin is to throw in a level of meta-fiction that has various characters from the show invade the real world to abduct the creators of the series and the actors that play themselves. This has its amusements, even if the basic idea has been done in numerous others places, ranging from The Purple Rose of Cairo (1985) to Last Action Hero (1993) and The Adventures of Rocky and Bullwinkle (2000), and The League of Gentlemen’s Apocalypse does nothing particularly novel or original with it.

What does carry The League of Gentlemen’s Apocalypse however is the performances. All play the various characters very well. The three central fictional characters are delineated with surprisingly more depth and even pathos than one might think and allowed to grow beyond the confines of the short skit. Indeed, for all the malice the series generates both towards and from its characters, by the end of the film here one suspects that the creators have come to regard the characters they are playing with an endearing fondness.