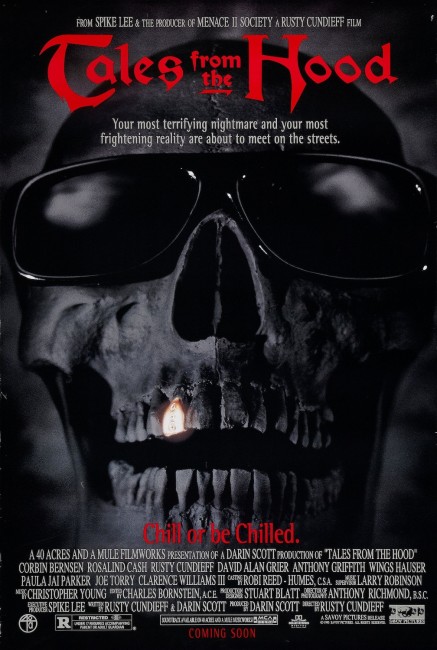 Welcome to My Mortuary:- Three gangbangers go to the mortuary of the strange Mr. Simms to pick up a stash of drugs secreted there. While waiting, Mr. Simms tells them several stories about the corpses that lie in rest. Rogue Cop Revelation:- Clarence, a Black rookie cop on the police force, is witness as three white officers beat Black councilman Martin Moorehouse. On the pretext of taking him to hospital, they push his car into the river with incriminating drug evidence planted in the trunk. Clarence quits the force and slips into alcoholism. One year later, on the anniversary of the incident, Clarence brings the other three officers to the cemetery where Martin rises from the dead, seeking retribution. Boys Do Get Bruised:- Teacher Richard Garvey becomes concerned at finding bruises on young pupil Walter Johnson. Walter is insistent that they were caused by a monster. Richard goes to Walter’s home to get to the bottom of the monster stories. KKK Comeuppance:- Duke Metger, a white Southern senatorial candidate, has taken residence in a mansion that was the centre of slave atrocities and is facing protests from the Black community about his poor choice in doing so. He then begins to find the voodoo dolls of the slave queen around the house, come to life to exact vengeance. Hard Core Convert:- After being found guilty and sentenced to life for a gangland shooting, Jerome ‘Crazy K’ Johns is taken by Dr Cushing who promises to rehabilitate him using extreme methods.

Many of the modern film anthologies focus around common themes, usually different directors coming together, sometimes adaptations of the works of an author. Tales from the Hood is one of the more unique among these in that it feels like a classic Amicus-styled anthology that has been reworked with a specifically African-American focus. Each of the horror stories are used to illustrate a particular aspect of race issues and racism – racial profiling by police, childhood abuse in the ghetto, southern racism, gangbanging.

The film is directed by African-American director Rusty Cundieff who can also be spotted in the second episode playing the concerned schoolteacher who visits the boy’s home. The film is produced by Spike Lee and his 40 Acres and a Mule Filmworks production company – Lee being a director, who through works like Do the Right Thing (1989), Mo’ Better Blues (1990), Jungle Fever (1991) and others, has cornered a certain niche on African-American race issues. Lee also subsequently made the vampire film Da Sweet Blood of Jesus (2014).

Most episodes in any anthology are variable, some weaker or stronger than others. With Tales from the Hood it is hard to pick a clear favourite – all of the episodes are solid and well above average for an anthology. The first episode hits in with a perfect sense of EC Comics black humour with the undead Tom Wright returning from the grave seeking vengeance and seen doing things like levitating the syringes in the streets after victims, standing at the grave holding the still beating heart of a corpse, Wings Hauser wrenched up through the roof of the police car and being returned to his seat without his head, and Michael Massee transformed into a piece of graffiti on the wall.

Episode 2, Boys Do Get Bruised, seems like a story about a boy with an imaginary companion a la the Mr Tiger segment in Tales That Witness Madness (1972) or perhaps The Veldt episode of The Illustrated Man (1969). Although here, the film plays against these and reverses expectation in terms of what we think is happening – the boy creating imaginary monsters is not the case at all and the monster is an allegory for the abuse in his life where the real fantastic twist in the tale is something else altogether. The episode comes to an effective sting ending with the bullying stepfather reduced to a pile of body parts with a head on the floor. If nothing else, this is one anthology that provides some great just desserts meltdowns.

The third episode, KKK Comeuppance, has the benefit of Corbin Bernsen, then the star of LA Law (1986-94) who eked out a modest genre career after that point, who lets all stops go and goes gloriously over-the-top as a leadbelly Southern politician. The episode turns out to be a variant on the Amelia episode of Trilogy of Terror (1975) – the one with Karen Black hunted by a Zuni fetish doll – and features some creepy doll effects from the Chiodo Brothers. It is however the entertaining gregariousness of Corbin Bersen’s performance that makes the episode.

Hard Core Convert is a sort of deathdream episode. However, it is more of a moral diatribe that gets angry about gang violence and makes the apt point that its’ protagonist who has killed other gangbangers is no different a murderer than the overt racism of the Black-directed KKK killings. This segues into the conclusion of the wraparound, which is another ‘dead all along– twist that homages the endings of classic anthologies such as Dr Terror’s House of Horrors, Tales from the Crypt and The Vault of Horror. There are some amusingly cheap effects in the end scenes as we see Clarence Williams III turning into a demon and the mortuary becoming Hell.

Rusty Cundieff has only directed a couple of other films, neither genre items. His only other work in the genre was the Victory’s Glory segment of Movie 43 (2013). Elsewhere, Cundieff has mostly directed television comedy for BET shows.