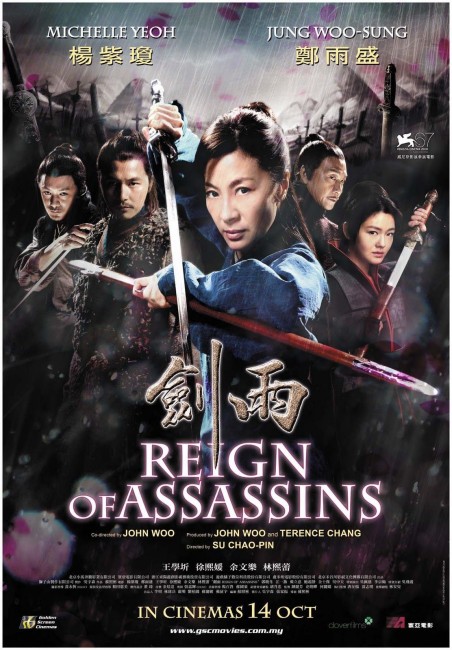 The Dark Stone guild of assassins conduct a raid on the home of Zhang Haiduan, seeking one half of the remains of Monk Bodhi, a highly advanced martial arts master. The possession of the monk’s complete remains is reputed to bestow great power on the owner. In the midst of the fight, the female Dark Stone assassin Drizzle gets away with the remains. Some years later, Zeng Jing rents a house in the capital and sets up as a cloth merchant. She is in fact Drizzle. After an encounter with the monk Wisdom who sacrificed his life in a fight with her so that she could know redemption, she has forsaken the way of the sword. She has had her face surgically altered to hide from the Dark Stones. She becomes attracted to the courier Jiang Ah-sheng and the two marry, he unaware of her true identity. Meanwhile however, the Dark Stones’ quest for the whereabouts of Drizzle, her purloined half of Bodhi’s remains and the whereabouts of other half bring the Dark Stones and other interested parties to the capital, threatening to expose her past.

Reign of Assassins comes from Taiwanese director Chao Bin-Su who had previously directed the non-genre Better Than Sex (2002) and the interesting scientific ghost story Silk (2006). Chao has written a number of other films, including the genre likes of one of the segments of Three Extremes II (2002), the action/serial killer film Double Vision (2002) and a further Wu Xia Guillotines (2012). The film is produced by John Woo, the Hong Kong emigre who had cult success in the early 1990s with action films like A Better Tomorrow (1986), The Killer (1989), Once a Thief (1990) and Hard-Boiled (1992) and moved to the US mainstream to make Hard Target (1993), Face/Off (1997), Mission: Impossible II (2000) and Paycheck (2003) and in more recent years has returned to mainland China and found acceptance there with historical dramas like Red Cliff Part I (2008), Red Cliff Part II (2009), The Crossing (2014) and The Crossing 2 (2015).

Reign of Assassins is somewhat of a disappointment after one comes to it with the expectations of Crouching Tiger, Hero et al. It is slow to start, while the flying swordsman action that we have come to expect of the genre is only sporadic throughout. Instead, Chao Bin-Su prefers to place the film’s focus on the script and character interactions, which admittedly end up becoming on quite a large scale as the various factions come together. Although being a subtitled film, this is often confusing through the number of parties involved and the film’s frequent digressions off into telling their backstories. The story that drives the film is essentially a Chinese variation on A History of Violence (2005) – imagine Viggo Mortensen’s former Mafia man in hiding as a regular family man rewritten with Michelle Yeoh as a former assassins’ guild swordsperson hiding out from the various clans with a husband.

The other big disappointment is that Chao Bin-Su chooses to downplay the flying swordsman element. Even though Reign of Assassins does fall within the Wu Xia genre, it is entirely possible to make an argument for it as a mundane film. Characters do fly, twirl in mid-air and conduct other slow-motion moves as in traditional Wu Xia but none of this is allowed to go beyond the realms of artistic licence we would extend to a realistically grounded swordplay film. The entire film sits on a point just between whether you can accept the swordplay elements as fantastical or are giving it sufficient artistic licence to be regarded as purely mundane moves.

The only point that Reign of Assassins does enter into what might be considered overtly fantastical territory is when it comes to the character of The Magician (Leon Dai) who at one point performs a trick called the Magic Flying Rope by extending a rope up into the sky, summoning a cloud, climbing the rope into it and vanishing. Nothing is ever explained about how he achieved this, although there is the suggestion in later scenes that these are conjuror’s tricks as opposed to real powers. The swordplay scenes are competent but never extraordinary. The film’s most unique move is Michelle Yeoh’s use of a Water Shedding Sword – a long-bladed sword made of a flexible metal that after striking someone bends around to stab the other side of their body.

I ended up disappointed with Reign of Assassins. Some of this is undeniably due to its playing down the elements of the type of film it was sold as being and I came in expecting it to be. The other might be that even though I was prepared to buy it as a mundane presentation of Wu Xia, the action scenes it serves up never sizzle in ways that make you gasp as you usually get with most of the aforementioned efforts.

The finest scene in the film is the confrontation between Michelle Yeoh and the monk Wisdom (Li Zonghan) where he pinpoints the weaknesses in her moves and then allows her to kill so that his death might serve to teach her something about the way of peace. (The one surprise about Reign of Assassins and a number of these Chinese-backed Wu Xia films is the surprising prevalence and strength of the Buddhist themes that run throughout).