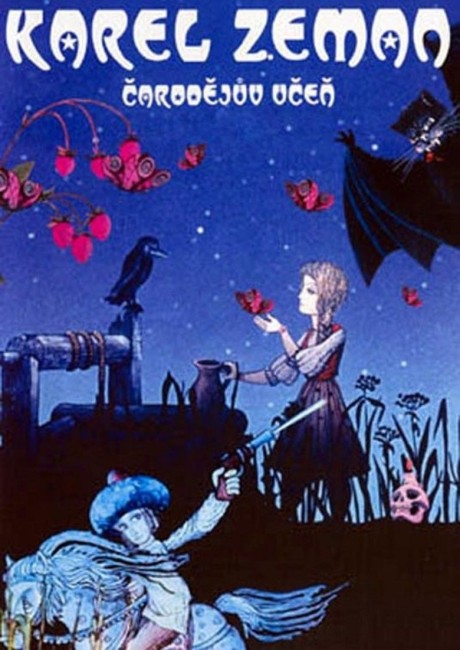 The orphan Krabat wanders through the countryside looking for food and shelter. A crow speaks to Krabat and directs him to Black Water Mill, a place the locals shun. Krabat is welcomed in by the master and is given lodgings alongside eleven other orphans. Krabat realises that the master is a sorcerer and regularly turns the orphans into animal form. The master uses his magic to trick and steal from people, creating illusions or transformations, taking their money and leaving them something worthless. The master offers to teach Krabat magic. Krabat soon learns how to change back from bird and cattle form after being transformed. The master is also cruel and Krabat rebels against his ways, especially when he is attracted to a girl in the village.

Karel Zeman (1910-89) was a Czech director who gained a small cult audience for his films. He attracted attention in particular with The Fabulous World of Jules Verne (1958). which comes with an amazing blend of animation and live-action. In a similar vein, Zeman made other films including A Treasure of Bird Island (1953), Journey to the Beginning of Time (1955), Baron Munchausen (1962), A Jester’s Tale/War of Fools (1964), The Stolen Airship (1967) and On the Comet (1970).

The Sorcerer’s Apprentice was the second-to-last film Zeman would make. He was seventy years old at the time. He would make one further film with The Tale of John and Mary (1980), made using cutout animation, after which he retired before his death in 1989. The last three films that Zeman made, Tales of 1001 Nights/The Adventures of Sinbad the Sailor (1974), which was actually assembled from several short films, The Sorcerer’s Apprentice and The Tale of John and Mary see him abandoning the inventive mixes of live-action and animated elements that made his name and instead opting for standard animation (as here) or using paper cutouts as in the other two films.

These last three purely animated films are also among Karel Zeman’s less celebrated. It is, I suspect, that his having abandoned the clever visuals and invention of the films that made him his name meant that he was making regular animated films and simply competing with all the other animators out there. It becomes disappointingly apparent that he is doing so without the resources that the English-language animation studios of the day had to hand. The animation is of limited quality while the backgrounds are static and there is often only one element of the frame that moves.

Zeman adapts Krabat (1972), a novel by Czech-born, German-raised children’s author Otfried Preussler, which is variously translated into English as The Satanic Mill or The Curse of the Darkling Mill. Zeman retains good faith to Preussler and this gives The Sorcerer’s Apprentice a solid story. It has an epic sweep – the youth drawn into become the magician’s apprentice, assorted animal transformations, magic-enhanced thievery and confidence games, with the young hero eventually rising up against the black sorcerer for the sake of love.

It is only the limitedness of the animation that makes this fail to come across with the scope it should have had. If the film had been made with the resources of a similar film around the same time – say Disney’s The Black Cauldron (1985) or some of Ralph Bakshi’s fantasy films like Wizards (1977), The Lord of the Rings (1978) and Fire and Ice (1983) – or even in live-action, it could have been quite something.