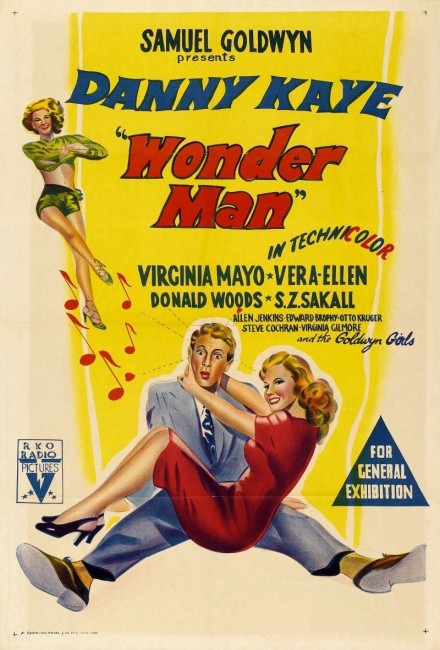 Nightclub singer-dancer Buzzy Bellew agrees to give evidence at a murder trial that would convict mobster Ten Grand Jackson. Ten Grand responds by having his hoods kill Buzzy. Buzzy’s twin brother is the bookish Edwin Dingle who has total recall. Buzzy’s ghost then appears to Edwin, wanting to take over Edwin’s body and pretend to be himself at the trial. Chaos ensues when Buzzy, in Edwin’s body, tries to resume his performing career and take up with his fiancée, all the while pursued by Ten Grand’s hoods.

Danny Kaye was a popular singer/dancer/comedian during the 1940s who became famous for songs that involved tongue twisters and bizarre muggings. After establishing his name as a Broadway performer, Kaye first starred on film in Up in Arms (1944). Wonder Man was his second starring role and he would go on to perfect his unique act in films like The Kid from Brooklyn (1946), The Secret Life of Walter Mitty (1947), A Song is Born (1948) and Hans Christian Andersen (1952).

Wonder Man nominally falls into the genre of light afterlife fantasy comedies made during the era – see the likes of Topper (1937), Here Comes Mr Jordan (1941), A Guy Named Joe (1943). Mostly, the ghost element has been used as a loose pretext for a film that consists of several sketches involving Danny Kaye going crazy in various ways.

It is really a quite nutty film. The opening Balinese dance number starts with Kaye in a positively manic mood and things only escalate upwards from there. There is all sorts of nonsense with Kaye and ghost double swinging from trees and kicking policemen; numbers with tap-dancing chorus girls singing about flirting with men and offering rhyming couplets like “smitten kitten”. It gets very silly in scenes with Kaye making animal noises into a phone and a number involving he singing Russian baritone but sneezing into the microphone throughout the number instead. The film arrives at a completely madcap ending with Kaye caught on a stage in an opera performance and trying to sing clues to the police chief in the audience.

One’s tolerance for this silliness is equal to exactly one’s tolerance for Danny Kaye’s fey, manic nervousness. Some people can’t stand him, others love his antics. Whatever the case, outside of Danny Kaye, there is almost nothing else to the film, it is an indulgence construed entirely around him. Certainly, this is probably the most madcap and nutso he was ever allowed to be on screen. (In an interesting trivia note, Wonder Man is also the film that allowed him to display his much vaunted talent of being able to write with both hands at once).