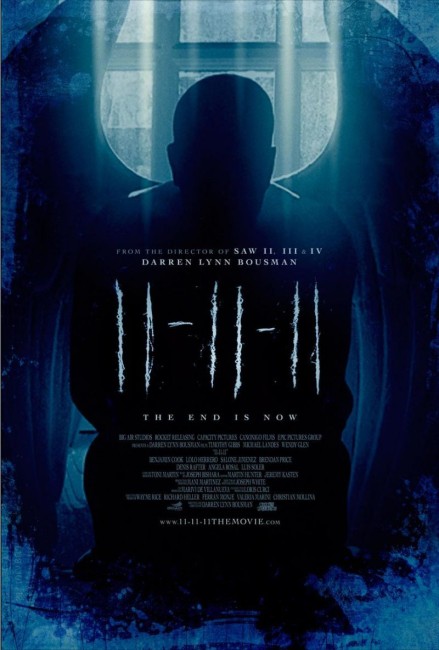 Joseph Crone, a popular thriller writer, is recovering after the death of his wife and son in a fire. He then receives news that his father is dying and flies to his bedside in Barcelona. There he reunites with his brother Samuel, having not seen either Samuel or his father since childhood. There is gulf between them in that Joseph is an atheist and both Samuel and his father are ministers of religion. Joseph begins to see haunted figures all around him, as well as statues that move and multiply on the security cameras outside the house. He believes these are supernatural entities known as Midwayers that manifest to people via the number eleven. As more and more of these appearances occur, Joseph comes to believe that his brother Samuel has a divinely ordained purpose and that the Midwayers are intending to kill him at 11:11 pm on the eleventh of November, 2011.

11-11-11 was the sixth directorial film from Darren Lynn Bousman. Bousman came to attention with his debut film Saw II (2005), followed by the two subsequent sequels in the series Saw III (2006) and Saw IV (2007). It was Saw III in particular that moved the focus of the series away from being a sharp psychological thriller and, in Bousman’s hand, into a series of sequels that became increasingly focused on the presentation of scenes of extreme torture and dismemberment – what came to be known as Torture Porn. Bousman subsequently went onto make other films such as Repo: The Genetic Opera (2008), Mother’s Day (2010), The Barrens (2012), The Devil’s Carnival (2012), Alleluia! The Devil’s Carnival (2015), Abattoir (2016) and St Agatha (2018), as well as the The Night Billy Raised Hell episode of Tales of Halloween (2015).

11-11-11 was Darren Lynn Bousman’s first venture into supernatural horror. The sole gimmick that 11-11-11 has is the date that it was released – November 11, 2011 (11-11-11). This has had the odd coincidence of being a line of identical numbers, nothing more than that. Despite this, the film wants to convince us that that the number 11 is of some significance in matters Christian or occult, although this is not the case at all. The only significance that a string of elevens has had as a date throughout history is a very corporeal one that occurred when the Armistice that ended World War I was signed at 11 pm on November 11 of 1918 (11-11-18). This has led to the common term ‘the eleventh hour’, meaning a solution or form of deliverance that arrives at the last minute. The psychic fraud Uri Geller – see Mindbender (1996) for details – has claimed that the numbers 11:11 follow him around everywhere.

Aside from Geller, there is zero significance to 11-11-11 than a film choosing the exceedingly slight notion of a numerically unusual calendar date as its premise. Not that that stopped The Asylum making another of their mockbusters 11-10-11 (2011) and releasing it the day before (although they were somewhat stymied in that 11-11-11 received only a limited theatrical release and went straight to dvd in most areas), followed by the subsequent 12/12/12 (2012) AND 13-13-13 (2013). There had also been the earlier more obscure Canadian horror film 11: 11 (2004), also about numerology and End of the World prophecies, although the two films are not otherwise connected.

Working outside of the arena of the Torture Porn film and with the gore-drenched sadistic set-pieces curtailed, Darren Lynn Bousman unfortunately shows that that was the only trick he had in his directorial book. The rest of 11-11-11 is no more than tedious B-budget occult cliches and pop-up jumps – the Jacob’s Ladder (1990)-like images of possible demonic figures lurking in the background; Timothy Gibbs being grabbed by crazy old women in the hospital delivering warnings; statues that are lit in a way that we are supposed to regard as ominous. Gibbs’ arrival in Barcelona (clearly the production taking advantage of tax breaks offered by shooting in Spain) is highlighted by a montage of shots of churches and cathedrals that we are supposed to attach portentous significance to as opposed to regard as a picture postcard tableau. The score tediously copies cliche sepulchral organ riffs from The Omen (1976). None of these pop-up shocks contain any atmosphere or come with any subtlety.

Darren Lynn Bousman is not much of a writer – the self-analysing diary entry voiceovers from supposed best-selling author Timothy Gibbs are particularly crude, lacking in any writerly style other than the regurgitation of cliches. There is the odd amusing line – Angel Rosal orders Timothy Gibbs up out of bed to attend church service: “I am not Kathy Bates but if you don’t get up out of bed in two minutes I am going to go all Misery (1990) on you.”

Perhaps one of the more unusual aspects about 11-11-11 is that Darren Lynn Bousman seems to be making a serious study of the issues of faith. He gives the appearance of being familiar with or at least having gone away and done some reading on matters Christian and attempts to argue a case of rationalism vs religious belief and create the parable of one man finding his faith. Of course, 11-11-11 being the film it is, all the ominous clues and apparitions that Darren Lynn Bousman stacks throughout makes the position that the film is going to eventually come down on obvious from the outset.

The film’s wackiest aspect is when Darren Lynn Bousman tries to wind in the 11-11-11 gimmick concept. When it comes to the idea of a series of limnal entities called Midwayers – exactly what they are meant to be or do, the film never specifies – that manifest themselves to chosen individuals via the number eleven, 11-11-11 gets into some decidedly nutty headspace. What we end up with is something like the loopy The Number 23 (2007) having been mashed up with a B-budget copy of an occult film. Ultimately, this fake numerological angle is 11-11-11‘s only selling point – without it, the film would be an utterly forgettable B-budget entry. The film does redeem itself mildly by pulling many of its elements together in a passable twist ending (even if one could see it coming). The only complaint about this is that it makes much of the preceding film into wilful misdirection – one never gets to find out the significance of the photos that Wendy Glenn picks up from the developers, for instance.