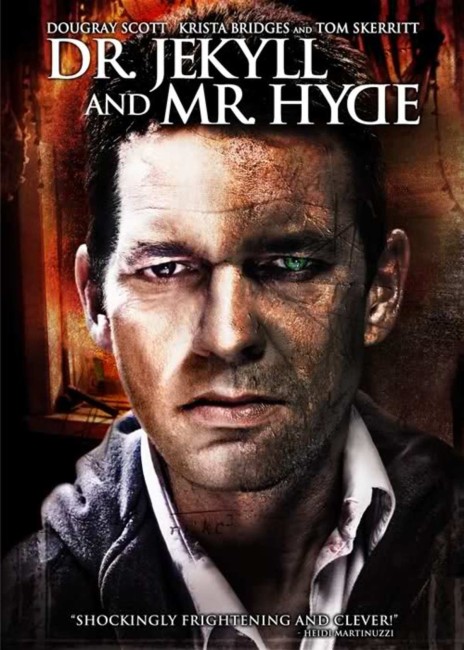 Boston medical researcher Henry Jekyll goes to lawyer Claire Wheaton and claims that he is responsible for a series of murders plaguing the city. He asks her to negotiate to have him locked away but will explain no more than that. She is sceptical but then finds that the locket he leaves her as evidence was worn by one of the murdered girls. She is followed by a sinister figure that people around Jekyll call Edward Hyde. Jekyll is arrested after his DNA is found on one of the murder victims. Claire learns of Jekyll’s experiments with a drug that he discovered among the natives in South America, which he believed could bring out the evil side of human nature. She decides to argue in court that the real killer was not Jekyll but Hyde and that Hyde is a separate person.

Robert Louis Stevenson’s The Strange Case of Dr Jekyll and Mr Hyde (1886) holds the record as the most-filmed ever horror story, with some thirty plus adaptations to date. (See below for other adaptations). This version produced for tv was one of a host of productions that came out in the mid-00s offering up modernised versions of the story. Others of these included the B-movies Jekyll + Hyde (2006) and The Strange Case of Dr Jekyll and Mr Hyde (2006), the excellent British tv series Jekyll (2007) with James Nesbitt, and the film Jekyll (2007) where Mr Hyde becomes a virtual reality creation. This version comes from the Canadian company Muse Entertainment and the American company RHI Entertainment, who have both produced a number of works for the Hallmark Channel. (For more in-depth view see Jekyll and Hyde Films).

You wonder, as you sit down to watch this version of Dr. Jekyll and Mr Hyde, what it is after exactly a century’s worth of film adaptations, parodies, spinoffs, sequels and the like, that yet another version could hope to find that has not been said before. The answer is – not that much. Most of the show coasts by on our familiarity with the story and makes minimal effort to enliven it. This version does conduct a modernisation of the story.

The principal twist here is to retell the Dr Jekyll story in a courtroom environment – try and imagine the novelty of Dr. Jekyll and Mr Hyde now by way of The Practice (1997-2004). It starts with the interesting idea of Dougray Scott’s Dr Jekyll going to ask Krista Bridges’ lawyer to contact police to arrange for him to be convicted as soon as possible. She then becomes the point-of-view character for the bulk of the film. The dramatic thrust of the story has Jekyll placed on trial for Hyde’s murders and Krista Bridges trying to argue that Hyde is a separate person and therefore Jekyll is not guilty.

Dr. Jekyll and Mr Hyde is not a particularly interesting version of the story. Neither the script nor director Paolo Barzman place much effort into drama, suspense or horrific effect. The central roles are also miscast with Dougray Scott. Dougray is a dour actor. He makes a valiant effort to method act his way through the two parts but with unmemorable results. One peculiarity about this version is the surprising absence of appearances from Mr Hyde for much of the film. The times he does turn up are denoted by Dougray Scott wearing contact lenses, an effect the story does not need and something that should have been conveyed through acting rather than external gimmicks.