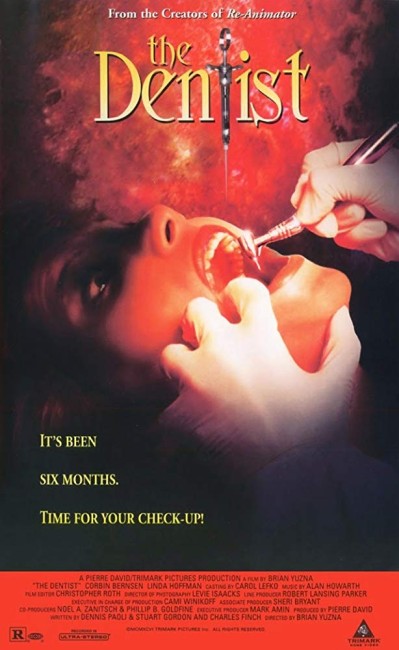 Alan Feinstone is a successful, if fastidious and exacting, dentist in Los Angeles. One morning, he returns home unannounced to discover his wife Brooke having sex with the pool boy. His mind snaps and he becomes obsessed with rooting out decay. At his practice that day, he begins to torture, molest and kill his patients, determined to drill out the rot he sees inside them.

With The Dentist – which was one of two films that were announced the same year with the same title (the other by Tobe Hooper never emerged) – Brian Yuzna is working with a script that was originally written for Stuart Gordon. The Dentist is produced by Pierre David, the expat Canadian producer who has specialized in a string of psycho-thrillers, usually with job-title descriptions – The Paperboy (1994), The Secretary (1995), The Nurse (1997), The Landlady (1997) – although films that are usually far less tongue-in-cheek than The Dentist.

This is a film that plays on everybody’s fear of dentists. Yuzna plays up all the inherent sadism – closeup images from inside the mouth of gums being injected, of teeth and even a tongue being drilled into. Yuzna always undercuts his films with tongue-in-cheek scenes of striking perversity. In one scene here, Corbin Bernsen comes home to find wife Linda Hoffman giving pool cleaner Michael Stadvec a blowjob and starts talking about her perfect bite and forces her to demonstrate by biting the poolboy’s dick off. There is another perverse scene where an aroused Corbin Bernsen puts Christa Sauls under the influence of nitrous oxide and starts molesting her. In one sequence, Yuzna contrasts Corbin Bernsen lining up his glittering, steel instruments in soft focus closeup with scenes of his wife dressing and putting on her makeup to come and see him, ending in an incredibly nasty moment where he imprisons her in his dental chair and starts pulling out her teeth without any anaesthetic. There are other disturbing images with Corbin Bernsen forcing tax inspector Earl Boen’s jaw to snap open with a retractor and injecting nurse Patty Toy in the neck with a syringe filled with air.

Brian Yuzna, Pierre David and Corbin Bernsen all returned for an also enjoyable sequel The Dentist 2 (1998).