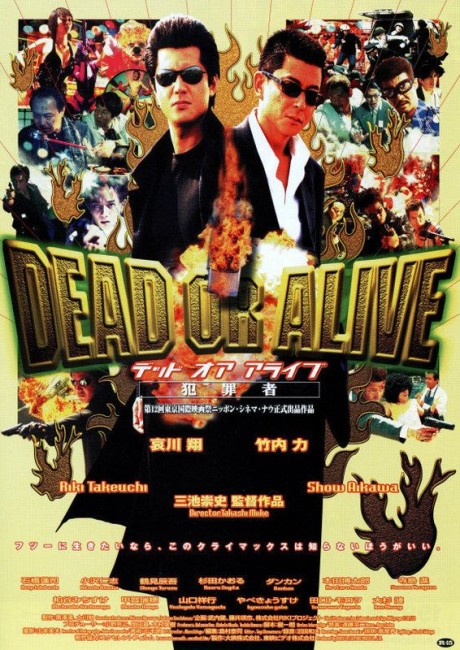 A Japanese detective Jojima follows the trail of a gang of bank-robbing, drug-dealing criminals from China who live in Japan.

It may well be that Takashi Miike proves to be the saving grace of modern Japanese cinema. Takashi Miike gained a strong reputation in the early 00s for his unique, taboo-defying films. Not to mention his prolific output – he has made some 80 films since 1991, seven films in 1999 alone. Miike first attracted international attention with the squirm-inducing horror film Audition (1999), the controversial Visitor Q (2001) and the amazingly violent Ichi the Killer (2001). It was only after the successes of these that the rest of Takashi Miike’s considerable output of films began to attract attention. Dead or Alive is one of his most acclaimed early films. Dead or Alive is actually a Yakuza film. I did not sit down to watch it expecting a write a review, until the very last scene, which definitely places it into the science-fiction/fantasy category.

Dead or Alive is made on a lesser budget and lacks the polish that Takashi Miike’s later films do. It is still an extremely accomplished film nevertheless. The sheer virtuosity of the opening ten minutes takes one’s breath away. Here Takashi Miike edits together outrageous images with dazzling regard:– the very first image is of a body falling from a rooftop and splattering on the pavement and in a staccato barrage we get rapid-fire images of a hood jumping onto the roof of a limo stopped in traffic to shotgun the mobster inside; a man snorting a six-foot line of coke; the wildly funny juxtaposition of the thrusting motions of one man taking a gay hustler up the ass in a toilet with the sped-up images of the mobster’s head bobbing while he slurps up noodles with the man having sex then having his throat casually slit from behind, while the noodle-slurper is shotgunned and his stomach explodes with noodles. The sheer energy of these scenes has a dazzling brashness. It is something that reminds of the first time that one sat down to watch a Quentin Tarantino or a John Woo film.

Dead or Alive slows down somewhat after the opening – not that any film could have sustained itself at such a pace. There is not a great deal of plot to the film, it only consists of Takashi Miike observing the various characters and their loyalties, family lives and so on. At the same time, there is not the assurance there is in later Takashi Miike films – some scenes like the bank robbery with the lead hood Riki Takeuchi in black and shades and the action taking place in slow-motion seems to be trying to be so cod-Tarantino and Woo-esque that the effect is derivative.

However, the constant in any Takashi Miike film is that he likes to go out on an edge and defy taboos. His films seem designed to make people who expect pat morals and comfortable light amusement squirm. Every so often in Dead or Alive he casually throws in something outrageous:– games of Russian Roulette; a dog being masturbated erect and then lifted up to fuck a woman for a porn movie; a scene shot from behind a couch where a hooker suddenly pops up, having been fellating her pimp and then spits a mouthful of semen into a bowl; a scene where a stripper’s head is held down and she drowned in a paddle pool of her own excrement.

Dead or Alive is a film that Takashi Miike is not taking terribly seriously either. He cuts from a tragic near ending where Sho Aikawa’s wife and daughter are assassinated by a car bomb and Sho sits forlornly distributing their ashes to an ending that is totally gonzo. This starts out as a classic showdown sequence. However, Riki Takeuchi quickly tips the less-than-serious nature with meta-fictional regard by announcing “This is the last scene,” whereupon Takashi Miike launches into a series of chicken races in cars, crazed hoods diving at cars racing towards them and plunging through the windscreen, a grenade explosion sending a car flying twenty feet up into the air and assorted shootouts.

It becomes increasingly more ridiculous with the wounded Sho Aikawa tearing his own gored arm off at the elbow and tossing it aside, producing a heretofore unseen rocket launcher from behind his back to shoot Riki Takeuchi, who then produces a Jedi-like ball of energy from inside his coat pocket and tosses it, whereupon everything goes up in a detonation that ripples across Japan as seen from space and blows the world up. Quite why Takashi Miike decided to go for such a gonzo ending is a mystery, but as one audience member commented leaving the theatre “That’s the most amazing ending I’ve ever seen in a film.”

Takashi Miike made two very loose sequels, the surreal Dead or Alive 2 – Birds (2000) and the outrightly science-fictional, future-set Dead or Alive: Final (2002). Although the plots are different, both feature Sho Aikiwa and Riki Takeuchi in different roles.

Takashi Miike’s other genre films are:– Full Metal Yakuza (1997), a yakuza/cyborg film; the teen film Andromedia (1998) about a schoolgirl resurrected as a computer program; The Bird People in China (1998) about the discovery of a lost culture; the torture and sadism film Audition (1999); the six-hour tv mini-series MPD Psycho (2000) about a split-personalitied cop tracking body-hopping terrorists; the surreal black comedy The Happiness of the Katakuris (2001); Ichi the Killer (2001), a Yakuza film with some extreme torture scenes; the controversial taboo-defying Visitor Q (2001) about a mysterious visitor; the surreal Yakuza film Gozu (2003); One Missed Call (2003) about ghostly cellphone calls; the ultra-violent Izo (2004) about a cursed, immortal samurai; an episode of the horror anthology Three … Extremes (2004); the superhero film Zebraman (2004); the fairytale Demon Pond (2005); the supernatural fantasy epic The Great Yokai War (2005); Big Bang Love, Juvenile A (2006), a prison murder mystery with SF elements; the SF film God’s Puzzle (2008); YatterMan (2009), a gonzo live-action remake of a superpowered anime tv series; Zebraman 2: Attack on Zebra City (2010); the videogame adaptation Ace Attorney (2012); Lesson of the Evil (2012) about a murderous high school teacher; As the Gods Will (2014) with high school students being slaughtered by a doll; Over Your Dead Body (2014) wherein the roles in a ghost story play come to replay themselves in the lives of the actors; the gonzo horror film Yakuza Apocalypse (2015); Terra Formars (2016) about giant mutated cockroaches on Mars; Blade of the Immortal (2017) about an immortal samurai; JoJo’s Bizarre Adventure: Diamond is Unbreakable – Chapter 1 (2017); Laplace’s Witch (2018); and The Great Yokai War: Guardians (2021).