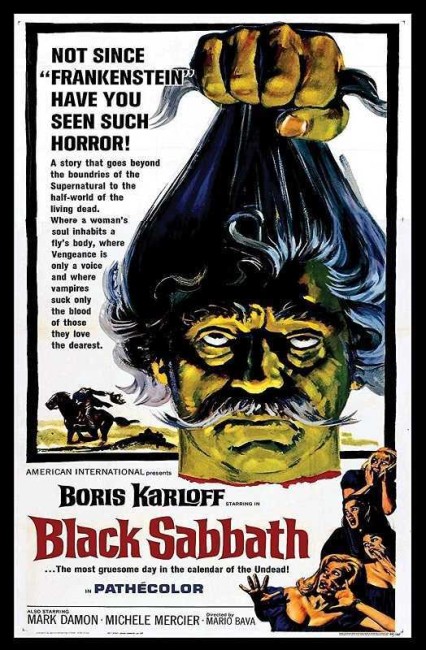 A Drop of Water – A woman is asked to dress the corpse of a neighbour who has died but steals a ring from its finger. Upon returning to her apartment, the dead body rises to haunt her. The Telephone – A woman living alone in her apartment receives phone calls from her dead boyfriend whom she turned over to the authorities. He is now able to see everything she does and taunts her that he will kill her by dawn. The Wurdulak – A nobleman travelling across the Russian steppes seeks refuge with a family. They are concerned about their father who went hunting a vampire known as the wurdulak, leaving them with the warning that if he returned after five days he must be killed. The father returns just after the five days expire and the family is uncertain what to do, even as he starts to drink their blood.

Black Sabbath was the seventh film of the great Mario Bava. Bava had single-handedly created the entire continental Gothic horror genre with his Black Sunday/The Mask of the Demon/The Revenge of the Vampire Woman (1960). Black Sunday was the greatest of Mario Bava’s several forays into the Gothic horror but Black Sabbath is commonly regarded as at least his second best.

Here Bava seems to be trying to revisit what he did in Black Sunday – two of the three episodes are adapted, like Black Sunday, from stories by Russian authors, and the third story returns to the same 19th century Russian milieu of Black Sunday. The principle difference is that here Mario Bava shoots in colour as opposed to black-and-white.

Black Sabbath is an anthology of three stories. Boris Karloff is brought as linking narrator, fulfilling much the same function he did on tv’s Thriller (1960-62). The principal frisson in all three stories is the theme of an individual’s home being alienated from them – the first two stories almost entirely take place inside a single apartment with a woman being haunted and driven insane by an eruption of the supernatural.

The first story A Drop of Water is occasionally heavy-handed but Mario Bava builds an effectively eerie accumulation of atmosphere through the likes of amplified drops of water and blinking lights from the street, eventually arriving at the ghostly appearance of the dead body in the apartment.

Even better is the second story The Telephone, which has a number of intensely unsettling moments like where the mysterious caller starts taunting the girl about things she has just done; where writing mysteriously appears on a blank piece of paper as she is reading it; and the caller taunts her “You’ll be dead by dawn” – a shock effect taken from The Cabinet of Dr Caligari (1919).

The third and best story The Wurdulak most resembles Black Sunday in tone (although in colour it comes out looking more like a Hammer film). It too plays on a sense of alienation of the familiar – in this case, a vampire that specifically preys upon members of his own family by turning their affections against them. There are some fine scenes with Boris Karloff returning and settling back into normal family life in blithe disregard of his family’s uncertainty about what he has become. Mario Bava builds some intense atmosphere with faces seen outside windows, Boris Karloff skulking around in a white perm and subtly underlit makeup, and a superb moment where a now vampirized child returns, knocking on the door and his mother is unable to resist her maternal affections to go to him.

Mario Bava’s other films are:- uncredited co-direction of Riccardo Freda’s I Vampiri (1957); the Gothic classic Black Sunday/The Mask of the Demon/The Revenge of the Vampire Woman (1960); the Greek muscleman fantasy Hercules in the Center of the Earth/Hercules vs the Vampires (1961); the giallo The Evil Eye (1962); the Gothic horror Night is the Phantom/The Whip and the Body/What? (1963); the giallo psycho-sexual thriller Blood and Black Lace (1964) the Gothic Kill Baby … Kill/Curse of the Dead/Curse of the Living Dead/Operation Fear (1965); the sf/horror film Planet of the Vampires (1965); the spy comedy Dr Goldfoot and the Girls Bombs (1966), Bava’s worst film; the masked super-thief film Danger Diabolik (1967); the giallo Five Dolls for an August Moon (1970); the giallo Hatchet for a Honeymoon/Blood Brides (1971); the giallo Twitch of the Death Nerve/Bloodbath/A Bay of Blood/Carnage/Ecology for a Crime (1971); the Gothic Baron Blood (1972); the giallo/haunted house film Lisa and the Devil/House of Exorcism (1972); and the possession film Schock/Beyond the Door II (1977).