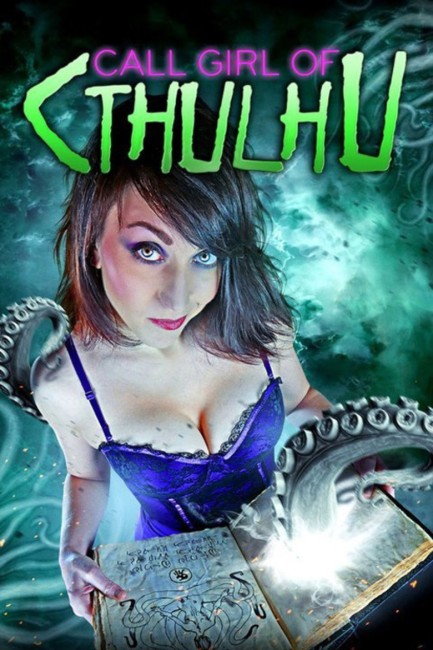 While being held under arrest, Carter Wilcox is interviewed by a police detective and asked to account for 43 dead bodies found in a church. He tells his story. He was an artist and a frustrated virgin. Picking up the card of call girl Riley Whately, who was a client of one of his neighbours, he hired her to pose for a painting. Afterwards, he asked her out to dinner where the two discovered a mutual attraction. Meanwhile, the members of the Church of Starry Wisdom led by Sebastian Suydum were searching for a call girl with a Cthulhu-shaped birthmark on her ass. Determined to stop them was Professor Edna Curwen and her associates who stole the copy of the church’s Necronomicon and brought it to Carter, asking him to make a copy. When Riley, who had the birthmark, was abducted by the church to be the chosen bride of Cthulhu and open the portal to another dimension so that Cthulhu could be freed, Carter realised that he must go into action to save her.

H.P. (or Howard Phillips) Lovecraft only had a brief writing career (from 1916 until his death in 1937 at the young age of 46). In that time however, he managed to create a body of work that has inspired a cult following. Lovecraft’s prose brims with a unique sense of cosmic horror – of Earth existing as a tiny island surrounded by unbelievably powerful ancient gods waiting to return to this dimension, lost cities, arcane tomes and rites, scientists whose quest for forbidden knowledge has taken them too far and individuals driven insane by sights and horrors so unimaginable they can only be expressed as ‘indescribable’. It has inspired a considerable body of film work (see bottom of the page), even if most of it is a far cry away from Lovecraft’s mood of unspeakable dread.

Call Girl of Cthulhu is clearly intended as a fan homage to H.P. Lovecraft. This is a surprisingly prolific field, there having previously been two other feature-length parody films with Lovecracked: The Movie (2006) and The Last Lovecraft: Relic of Cthulhu (2009), while Lovecraft homage short films are so legion that they have festivals of them – see The H.P. Lovecraft Film Festival – North (1999) for one such. The title is a parody of one of Lovecraft’s most famous stories The Call of Cthulhu (1928), which was also used as the name of a Lovecraft-based role-playing game first published by Chaosium in 1981. Beyond that, the film overspills out of every conceivable corner with some kind of Lovecraftian reference – all the characters are named after ones from Lovecraft’s stories, sometimes with amusing effect like the stripper on a porn webcam site named Missy Katonixx (after the Miskatonic University, one of the key locales that recurs throughout Lovecraft’s works).

The main problem with Call Girl of Cthulhu is that it is an enthusiastic production made by fans (for which read amateurs). Certainly, director Chris LaMartina has made several other films, nevertheless the lack of professional production expertise does show through in a number of key areas. The performances are frequently ones by non-professionals, although for the most part the actors in the key roles hold up well, especially once the film contrives to get its two leads together.

This non-professionalism shows particularly when it comes to the numerous makeup effects, which are liberal with slime and gore but ultimately cheap. Sometimes painfully so – the facial appliances for the various squid people cultists merely consists of extras in hoods with strips of cloth dangling over their faces, while the opening of the doorway to the other dimension to unleash Cthulhu is represented by what looks like two pieces of wobbly cardboard wall being moved apart.

Ultimately though, Call Girl of Cthulhu is less a homage to H.P. Lovecraft than it is to the cinematic Lovecraft that began with Stuart Gordon’s Re-Animator (1985) and From Beyond (1986), which took the stories away from psychological suggestion and dread and into the arena of campy 1980s creature effects driven horror. Chris LaMartina clearly aims to make a film in the vein of Re-Animator or other tongue-in-cheek splatter classics of the era such as The Evil Dead (1981) and Peter Jackson’s Bad Taste (1988) but the effects are too cheap and the film delivers the balance of comedy in far too broad strokes. All we get ultimately is C-budget wannabe Stuart Gordon, although the film does at least rise to an entertainingly preposterous climactic bloodbath.

The plot connecting everything together is fairly slim – and oddly enough, very similar to the one that appeared in Rob Zombie’s animated The Haunted World of El Superbeasto (2009). What does come through, despite quite a few rough areas, is that the filmmakers are really into making the film. It is their enthusiasm for their subject and what they are trying to make that carries the exercise over many of its rough spots.