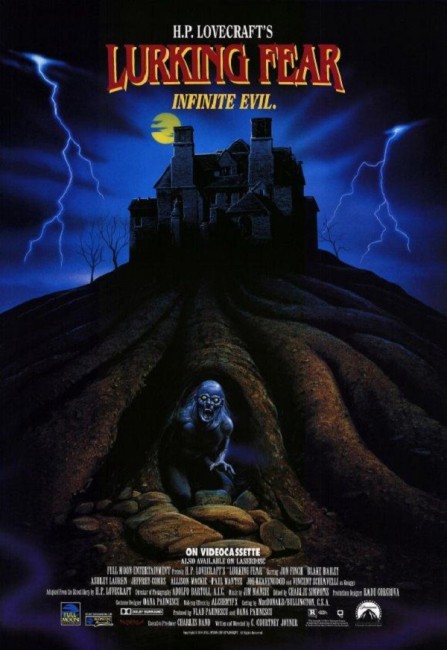 John Martense is released after a five-year jail sentence for a crime he insists he did not commit. The undertaker Knaggs persuades him that the Martense family fortune lies buried in the graveyard in Lefferts Corners. John returns there to search for it just as a group of locals barricade themselves in the church determined once and for all to destroy the things that lurk beneath the graveyard. At the same time, the British gangster Bennett and two of his thugs arrive, bent on taking the money. In the midst of the tense standoff, the creatures beneath the graveyard begin to stir.

Charles and Albert Band had one of their biggest hits with Stuart Gordon’s Re-Animator (1985). This was adapted from a series of stories by horror writer H.P. Lovecraft. The success of this sparked off a series of Lovecraft adaptations in the late 1980s/early 90s, which included The Curse (1987), The Unnameable (1988), The Resurrected (1992) and Necronomicon (1993). The Bands and Stuart Gordon went onto make one other Lovecraft adaptation with From Beyond (1986). Gordon for a time tried to launch a version of The Shadow Over Innsmouth (1936) under the Bands, although this failed to come off, and he later went onto make Dagon (2001) elsewhere, while Re-Animator producer Brian Yuzna made Bride of Re-Animator (1990) and the Lovecraft anthology Necronomicon.

The Lurking Fear (1923) was a story that H.P. Lovecraft published in Home Brew magazine serialised over four issues. In the story, the monster-hunting narrator and others take refuge in the abandoned Martense mansion in The Catskills during a storm, only to find it filled with lurking creatures. Following the creatures into their underground lair that stretches beneath the graveyard, the concluding twist of the story is the revelation that the creatures are the degenerated remains of the Martense family. The story has previously formed the basis of the low-budget Dark Heritage (1989) and the subsequent Dan O’Bannon scripted Hemoglobin/Bleeders (1997), although neither film credits Lovecraft as the source.

The Bands were clearly hoping that Lurking Fear would be another Re-Animator. The film has a good opening scene with two sisters fending off creatures reaching through the wall and trying to snatch the baby crib with a wire hangar, before grabbing and bloodily dragging one of the sisters through a small grate. The scene seems promising for what is to come – only the great crime is that Lurking Fear slows down.

Fully two-thirds of the rest of the film concerns itself with bringing the various characters together in a church but then just leaves them there arguing about the situation, while occasionally a claw sticks up through the floorboards. The script doesn’t do enough to play either the tensions between the party off against each other or mount the siege situation to anything particularly intensive. It feels more like half-an-hour plus of the film’s running time sitting around a cheap set waiting for something to happen. Certainly, if the Bands were hoping that Lurking Fear was going to be another Re-Animator or even a From Beyond, what we have feels like the antithesis of that – something where Stuart Gordon’s splatter, outrages and black humour is almost entirely absent.

Nor for that matter is there much of H.P. Lovecraft to the film. Mindedly, the Bands and Stuart Gordon’s take on Lovecraft tossed much of his psychological mood and unspeakable horrors out the window in favour of gore and creature effects, which is almost the antithesis of a Lovecraftian story. Lurking Fear does perhaps come closer to Lovecraft than Re-Animator, which was a less typical Lovecraftian story. The Martense mansion has been replaced by a church, which one supposes is an acceptable trade-off that is less costly on large sets. On the other hand, none of the characters in the film have any semblance in the story, while the family treasure angle has been invented to drive proceedings along. Only in the last fifteen minutes of the film do the creatures lurking below get unleashed – some tolerably cheap makeup effects – and we get the full explanation of what they are and their ties to Martense lineage, which is where the Lovecraft story eventually arrived at.

The film does have some interesting casting. Top-lined is Jon Finch, a British stage actor who was a minor rising name in the 1970s, in particular in genre efforts such as the Alfred Hitchcock psycho-thriller Frenzy (1972) and the Michael Moorcock adaptation The Final Programme (1974). There is also Ashley Laurence, the heroine from Hellraiser (1987), for some reason billed here as Ashley Lauren (maybe she was hiding or someone typing up the credits made a huge typo), who has what seems intended to be a kickass role while never actually getting to do much. There is also Jeffrey Combs whose presence seems mandatory in the Bands’ Lovecraft films – although here he has a far less interesting role than any of his two prior outings playing the supporting role of an alcoholic doctor.