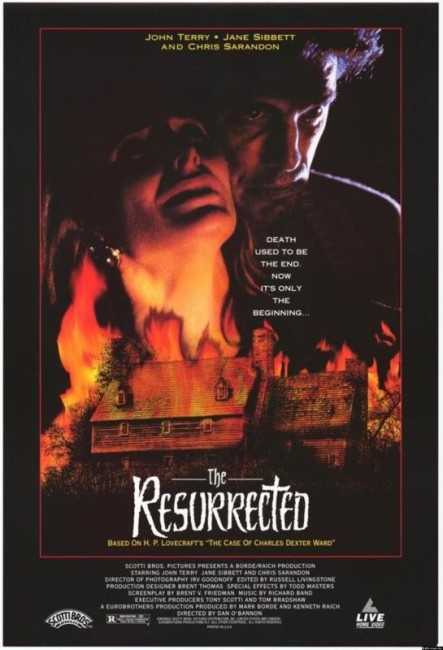 Private detective John March narrates an incredible story. He was contacted by Claire Ward who was concerned about her husband Charles who had become obsessed with conducting mysterious experiments and was then apprehended by the police for smuggling dead bodies into the country. As March investigated, he discovered that Ward believed he had been taken over by the spirit of his 18th Century ancestor, the black magician Joseph Curwen. He had taken to eating raw meat and appeared to be connected to a series of killings where the victims had been eaten. As March penetrated the labyrinth underneath Curwen’s former house, he encountered abominable mutations and discovered that Ward had created a formula that resurrected the dead.

One of the great mysteries of the 1990s and 00s was “What ever happened to Dan O’Bannon?” As scriptwriter, Dan O’Bannon made two grandslams in the 1970s with the scripts for Dark Star (1974) and Alien (1979). O’Bannon then went on to deliver some fine hard-edged scripts, including the likes of Dead & Buried (1981), Heavy Metal (1981), Blue Thunder (1983), Lifeforce (1985) and Invaders from Mars (1986), before making an excellent directorial debut with Return of the Living Dead (1985), which inverted George Romero’s Dead trilogy with a cheerful punk cynicism. However, in the 1990s, Dan O’Bannon almost entirely dropped from the cinematic radar. There were a number of scripts with his name attached – Total Recall (1990), Screamers (1995) and Hemoglobin/Bleeders (1997) – but all of these were old scripts that had been reworked by other writers.

The Resurrected was Dan O’Bannon’s second directorial outing, the only work in the 1990s where O’Bannon has had hands-on experience. All of which is a shame as O’Bannon is one writer that one wished would return to the genre. [Alas, this is no longer to be the case with O’Bannon’s death in 2009 and it would appear that the reasons for his absence from screens was due to a crippling case of Crohn’s Disease]. Also of note is Jodorowsky’s Dune (2013), a documentary that details O’Bannon’s work as special effects director on Alejandro Jodorowsky’s failed adaptation of Dune (1965) in the 1970s.

The Resurrected is adapted from an H.P. Lovecraft story The Case of Charles Dexter Ward (1941) – the same story had previously been adapted as Roger Corman’s The Haunted Palace (1963). Here Dan O’Bannon is directing another writer’s script – in this case, Brent V. Friedman, a genre writer who has written screenplays for the likes of Syngenor (1990), Ticks (1993), American Cyborg: Steel Warrior (1992), the Prehysteria! sequels and produced genre tv series such as Dark Skies (1996-7), Secret Agent Man (1999-2000) and Woke Up Dead (2008-9), as well as delivering the script for the H.P. Lovecraft portmanteau film Necronomicon (1993).

H.P. Lovecraft’s The Case of Charles Dexter Ward is a relatively straightforward piece about a man being possessed by the spirit of his ancestor that emerges from a portrait. The Resurrected came about as part of a vogue for H.P. Lovecraft that had been created by the success of Stuart Gordon’s Re-Animator (1985). Re-Animator identified Lovecraft with a campy splatter-heavy approach, one that has been taken as lead by the various Lovecraft adaptations ever since.

The Case of Charles Dexter Ward is not on the face of it a Lovecraft story that is geared toward such a splattery approach. Brent V. Friedman ingeniously solves the problem with a series of twists about Curwen not being a disembodied spirit so much as an evil ancestor raised from the dead through black sorcery, thus allowing the insertion of various Hellraiser (1987)-styled bodily reconstitution scenes. [In an interesting trivia note, this is the only H.P. Lovecraft adaptation to use Lovecraft’s home turf (and the story’s setting) – Providence, Rhode Island – as a location (even if the Providence scenes were all shot in Vancouver)].

The Resurrected lacks the energy and vigour that Dan O’Bannon displayed with Return of the Living Dead. Nearly half the film is on the story-heavy exposition side wherein nothing much happens, although O’Bannon and Brent V. Friedman do create a good mystery and some effective images such as the overacting Chris Sarandon suddenly talking in 18th Century tongue.

In the latter half, O’Bannon eventually delivers the goods in a sequence where John Terry, Jane Sibbett and Richard Romanus venture by torchlight down into the catacombs beneath the Curwen home finding arcane diaries, partially raising something from the dead with a serum, encountering half-seen monstrosities in the dark and then the torch going out at the crucial moment and they having to make their way back in the dark by matchlight as the mutations close in. The twist ending and revelations about who is impersonating whom and John Terry’s means of dealing with this are also well done. It is during these sequences that Dan O’Bannon conjures something of the mood of Lovecraft and his sense of abominable experiments, unspeakable monstrosities and forbidden knowledge. This makes The Resurrected one of the few post-Re-Animator films that successfully captures the mood of H.P. Lovecraft.