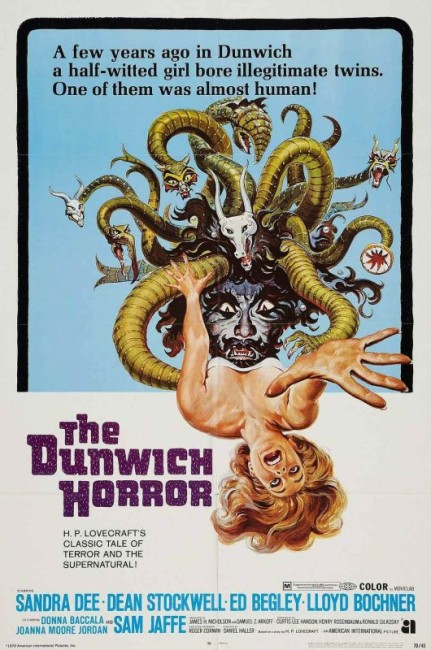 Nancy Wagner meets the mysterious Wilbur Whateley at university. When Wilbur misses his bus back home to Dunwich, she offers to drive him. However, once back at the gloomy Whateley family mansion, Wilbur sabotages her car and drugs Nancy to keep her there. He then steals a copy of the occult tome The Necronomicon from the university library. With it, he begins a series of blasphemous rites, designed to call up the Great Old Ones, gods from another dimension, to breed with Nancy.

H.P. Lovecraft (1890-1937) is a horror writer who has developed a cult following. There is something about H.P. Lovecraft’s visions of cosmic horror, of elder gods waiting outside time to get back in, of antediluvian races and lost cities, of abominable rituals and experiments, and of people driven insane by contact with these manifestations of the occult that sticks at the back of the mind and survives even Lovecraft’s turgid prose.

The success of the Lovecraft adapted splatter comedy Re-Animator (1985) brought about a host of B-budget Lovecraft adaptations in the 1980s and 90s with the likes of From Beyond (1986), The Curse (1987), The Unnameable (1988), The Resurrected (1992), Necronomicon (1993), Lurking Fear (1994) and Dagon (2001). Almost all of these betrayed the intensely paranoid sense of cosmic horror found in Lovecraft and dumped the unspeakable horrors in favour of splattery upfront gross-out effects. (See below for a full list of H.P. Lovecraft film adaptations).

Prior to Re-Animator, H.P. Lovecraft was not much in vogue on cinema screens. There had been several Lovecraft adaptations made during the 1960s but these seemed only made as distaff cousins to Roger Corman’s cycle of Edgar Allan Poe films. Of the four Lovecraft adaptations made during this period, curiously enough Dunwich Horror director Daniel Haller was involved with all three – as production designer on The Haunted Palace (1963) and as director of both Die, Monster, Die!/Monster of Terror (1965) and The Dunwich Horror here.

The Dunwich Horror is based on Lovecraft’s 1928 short story of the same name, although has been substantially adapted (there is no equivalent of Sandra Dee’s character in the story, for instance). The film starts promisingly. The opening credits, filled with metamorphosing shapes on animated midnight blue backgrounds and an impending Les Baxter score, are fine.

Immediately after this however, the film takes a big nosedive – like the minute the live-action opens with the deadening line: “Why don’t you take this copy of The Necronomicon and return it to the library?” One can clearly sense that dear old H.P. Lovecraft is in for a rough time. Not too surprisingly, one is proved right. Certainly, the climax conjures something of Lovecraft’s sense of sense of occultic rituals to call up Elder Gods and at least comes closer in style to Lovecraft than any of the post-Re-Animator ilk. However, Daniel Haller’s directorial style is flat and lacking in any depth of character of subtlety. Everything takes place at a slow, plodding, nondescript pace.

Indeed, with the addition of afro-headed, 1960s drug hallucinations, H.P. Lovecraft might have some difficulty recognising his story. Ed Begley [Sr]’s gruff, painfully dogged intonations as the savant figure is rather awful. Although, that is not as bad as the film’s being lumbered with Sandra Dee, the former bubbly teen sensation in various Gidget and Tammy films, as the virginal sacrifice of the show.

The story was remade as The Dunwich Horror (2009) starring Jeffrey Combs as Wilbur and with Dean Stockwell making a return appearance this time in the role of Armitage.

Director Daniel Haller was originally a production designer on numerous Roger Corman films of the 1950s and 60s. Haller made his directorial debut with the other H.P. Lovecraft adaptation Die, Monster, Die/Monster of Terror (1965). Haller would make a total of six films as director and then worked in television up until his retirement at the end of the 1980s. His one other venture into genre material as director was the theatrical remake of Buck Rogers in the 25th Century (1979).