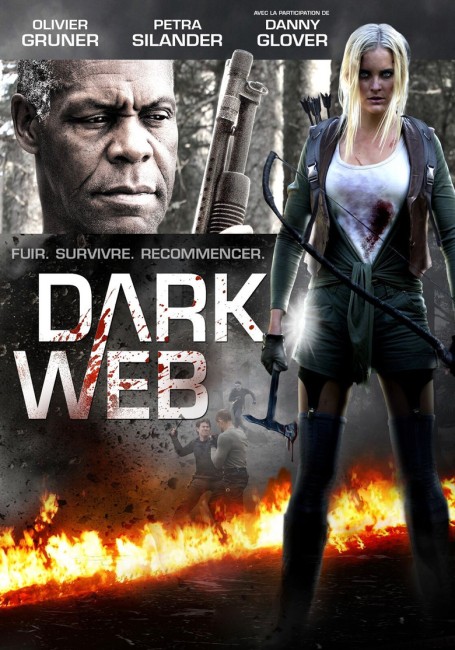 A military unit arrives at a farm in Russia where they abduct Ilona and her brother Stanislas, while killing her father. It is revealed that she has been captured by mercenaries working for Darkweb, a company headed by Bogdan and Anna that specialises in creating videos where people are hunted by wealthy customers, which are then sold on the darkweb. Stanislas is held prisoner to force Ilona’s cooperation. She is released into the grounds with nothing to defend herself but her bare hands as six wealthy paying clients come hunting her with weapons.

The term ‘darkweb’ has become a phrase in the public zeitgeist in the last few years. Following the high-profile takedown of the Silk Road in 2013, the public became fascinated with the idea of the darkweb or darknet, an area of the internet that can only be accessed by browser protocols that create almost complete anonymity. Cloaked by such anonymity, illegality flourishes. The Silk Road offered mail order narcotics. Other sites have popped up specialising in hacking for hire, hitmen for hire, child porn, terrorism, as well as some more respectable sites dealing with whistleblowers and confidential journalism. There have been persistent stories of sites offering live-streamed torture and murder but all of these are believed to be hoaxes.

Despite the provocative idea the title offers in setting a film around the darkweb, Darkweb proves in actuality to be no more than a variant on Richard Condon’s short story The Most Dangerous Game (1924) about a mad aristocrat who traps travellers on an island so he can hunt them as they are forced to survive with their bare hands. This was most famously filmed as The Most Dangerous Game (1932) and has been remade a number of times since with A Game of Death (1945), Run for the Sun (1956) and Bloodlust (1961), while we have seen variants on the human hunting/barehanded survival theme in other films such as Turkey Shoot (1983), Predator (1987) and Slave Girls from Beyond Infinity (1987) to action movies like The Running Man (1087), Hard Target (1993) Surviving the Game (1994) and The Hunt (2020) and more recently the huge hit of The Hunger Games (2012). The same scenario we have here where the hunt is filmed for an internet audience played out in very similar ways in the more high-profile action film The Condemned (2007).

Very soon in, Darkweb proves a dismally bad film. The film is made by Francophone speakers but shot in English, which results in an accented cast delivering dialogue that sounds like nothing an native English speaker would ever say. In every regard, the film is badly written. The psychology of the characters and the set-up of the operation seem frankly unbelievable. The film does nominally slot in as an action film but most of this consists of poorly choreographed scenes taking place between the actors.

The only recognisable names that turn up are Olivier Gruner, the former kickboxing champion briefly turned action star during the VHS era of the 1990s. Despite his background, Gruner is sidelined, kept imprisoned for the entire show and gets no action scenes until right at the very end. There is also Danny Glover who has a rather hilarious role, seen only on a tv monitor angrily ranting from behind an office desk.