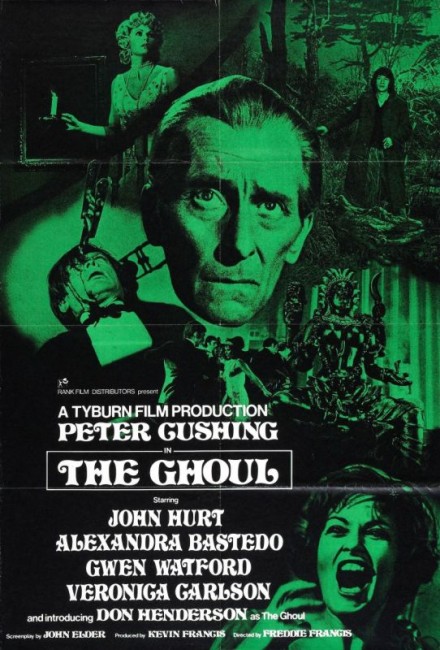 England during the 1920s. At a party, two bored men challenge each other to a car race to Land’s End. However, one of the cars breaks down. Passenger Daphne Wells-Hunter walks to the nearby country estate to find help and meets Dr Lawrence, a former missionary to India, who lives in seclusion there. She is then killed by the bald, cadaverous man that Lawrence keeps locked in an upstairs room and her companion is pushed over the cliff in the car. Their friends then come looking for them and refuse to believe Lawrence’s explanation that it was an accident.

The Ghoul was an interesting production from the short-lived British production company Tyburn Films. Tyburn was founded by Kevin Francis, the son of director Freddie Francis, in an attempt to copy the success that Hammer was having with their horror films. Alas, Tyburn’s failing was the timing – the mid 1970s – the point when the Anglo-Horror Cycle was on the way out, having been over-milked by Hammer with too many weak Dracula sequels and weaker variations on their classics, while international audiences were turning to other more modern interests. Tyburn made only three films – the psycho-thriller Persecution/The Terror of Sheba (1974), Legend of the Werewolf (1974) and The Ghoul – before being closing up shop.

The Ghoul certainly has present many of the people who worked on Hammer’s classics – director Freddie Francis, actors Peter Cushing and Veronica Carlson, Hammer producer Anthony Hinds writing the script behind his usual John Elder pseudonym, makeup man Roy Ashton, and others. There is also a young John Hurt playing a sinister groundsman, as well as Don Henderson, later the sly-witted detective Bulman in tv’s Strangers (1978-82) and Bulman (1985-7) playing the ghoul.

Like a number of films out of the Hammer cycle – Stranglers of Bombay (1959) and The Reptile (1966) – The Ghoul draws on elements of Indian religious exoticism to show British society being haunted by repressed elements from its colonial era. The film breaks the mold of the Hammer Gothic drama in choosing an Edwardian rather than Victorian setting.

Unfortunately, the plot feels as though a whole chunk of pages that concerned what was going on had been torn out prior to shooting – not much is ever explained about Don Henderson’s cannibalistic creature, how he ended up that way, nor the need for the sacrifices and Eastern religious trappings. The plot is thin on the ground, only centring around various people investigating the disappearances and the mysteries of Peter Cushing’s brooding country estate. The padding seems obvious at times. However, the atmosphere of strangeness amid the mist-flowing moors is certainly well evoked, and Peter Cushing gives a strong performance as always.

The Ghoul is not any relation to and should not be confused with The Ghoul (1933), featuring Boris Karloff as a man raised from the dead skulking around a country mansion, or the subsequent reality-bending The Ghoul (2016). Or even for that matter the cheapie The Mad Ghoul (1943), which had George Zucco’s mad scientist inventing a zombiefying gas.