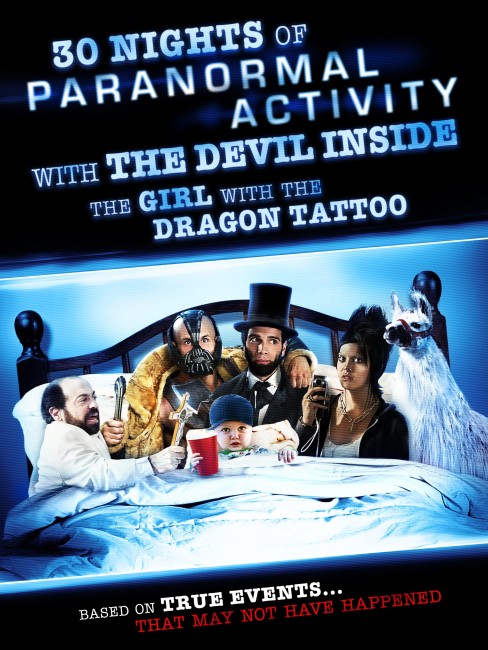 Two women obtain the contents of a storage locker in a reality tv show competition. Among the effects, they discover a Found Footage videotape. This depicts how Dana Rosti went to Italy to visit her father Herb who had slaughtered the entire cast of ‘The Artist’ during an exorcism. Dana returned and married Aaron Galen and they moved into the family house and raised a daughter Liz, who grew up a cynical, pierced teen with a dragon tattoo, followed by a young baby Jonah. As they became aware that an entity was haunting the house, Aaron wired it with video cameras and then brought in a hyperactive reality tv ghostbusting trio known as The Ghost Brothers.

A certain type of movie parody was begun with Scary Movie (2000). Previous film parodies such as the works of Mel Brooks and in particular Airplane (1980) and the genre of films that took themselves from that were based around creating a series of gags spoofing a familiar genre of films. Scary Movie reduced that to an intellectually lazy level – it simply took a bunch of films that had come out in the last twelve months, replicated various scenes from them and ran a series of crude moron gags over the top. Scary Movie spawned four sequels and several imitators. The most prolific and high profile imitators to mine this vein were Scary Movie‘s screenwriters Jason Friedberg and Aaron Seltzer who became a directing duo and made an entire career out of movie parodies with Date Movie (2006), Epic Movie (2007), Meet the Spartans (2008), Disaster Movie (2008), Vampire Suck (2010) and The Starving Games (2013) and in so doing took it down to agonising depths that have ended most of their films on this site’s worst of the year lists.

Director/writer Craig Moss first appeared with another short spoof Shaving Ryan’s Private (1998). This led to the feature-length The 41-Year Old Virgin Who Knocked Up Sarah Marshall and Felt Superbad About It (2010), followed by Breaking Wind (2012), spoofing the Twilight series, as well as the non-parody vigilante film Bad Ass (2012), which spawned two sequels. Moss subsequently went on to make two non-comedy horror films with The Charnel House (2016) and Nightmare Nurse (2016).

Craig Moss follows the Friedberg-Seltzer formula – take a bunch of films that have come out in the past twelve months and do inane, stupid and especially crude and scatological things with them. Pepper the show with lots of snide jokes about celebrities of the moment and pitch the entire film for people who have IQs in the double-digit range. Thus we get spoofs of everything from tv reality shows like The Apprentice (2004– ) including a Donald Trump lookalike, Ghost Hunters (2004– ) and Storage Wars (2010– ); the pottery love scene from Ghost (1990); the Resident Evil series where counterparts of Alice turn up (and makes out with a lookalike of Selene from the Underworld series) and reference is made to Flip Schultz going to work for The Umbrella Corporation; Olivia Alexander plays a lookalike of Rooney Mara’s Lizabeth Salander from The Girl with the Dragon Tattoo (2011); films like The Artist (2011) – French Stewart’s father is supposed to have eaten them, Abraham Lincoln, Vampire Hunter (2012) and The Hunger Games (2012), and a Bane from out of The Dark Knight Rises (2012), among others.

It should be pointed out that the film’s characters only rarely resemble their counterparts in the original films – Abraham Lincoln now becomes a sleazily smooth charmer who lives next door, while in The Girl with the Dragon Tattoo films Lizabeth Salander was someone broken and brittle due to abuse, but here she is no more than a bored, cynical teenager.

I always thought that Friedberg and Seltzer were some of the worst directors currently at work in the US mainstream. What may be even worse than Friedberg and Seltzer is a failed attempt to imitate their films. If you have to commend Friedberg and Selzter (and I have nothing I wish to praise about anything they have ever done – I only wish to make this in comparison to how Craig Moss fails), they are at least capable of directing their spoofs towards some crude and rude punchline. By contrast, Craig Moss flounders around and rarely ever finds a punchline. It results in a slightly less crude and moronic film but one that is no less witless.

The film lets its performances get as ridiculous as possible, most annoyingly being Peter Gilroy and Tyler Stephen Phillips as the two Ghost Brothers. As with a film like this, there has to be a swag of minorities to take potshots at, including a gay Latino character known as Felipe the Manny, played by Arturo Del Puerto in as flamingly an over the top way as possible, as well as a dwarf and a plus-size girl (a parody of singer Adele) who are only present to be made fun of.

There is one mildly amusing scene where Kathryn Fiore is dragged out of the door (a la Katie Featherston in Paranormal Activity) down the street to the convenience store and then exits again with some groceries and returns to the house where we next see the ghostly entity eating them. I don’t know, I found it mildly amusing (about the only thing in the film that was).