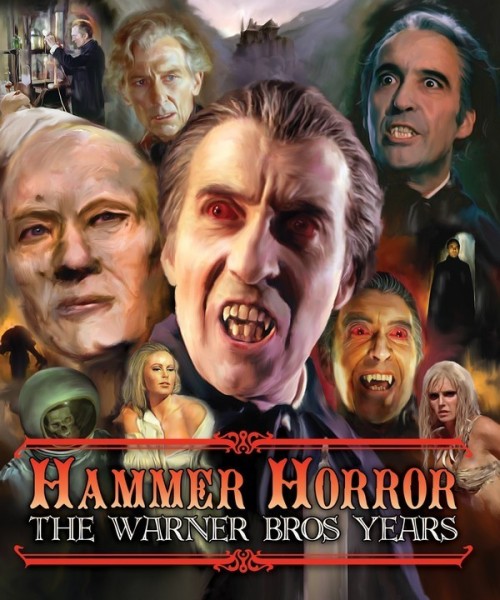 England’s Hammer Films were where horror was at for anybody alive during the 1960s and early 70s. Beginning with the huge international successes of The Curse of Frankenstein (1957) and Dracula/The Horror of Dracula (1958), the studio spun out a series of sequels to these and remade several other classic horror properties, as well as created a host of original works over the next two decades. They made the careers of Christopher Lee and Peter Cushing and a number of others associated with the studio.

There have been several documentaries about Hammer over the years – see Hammer: The Studio That Dripped Blood (1987) and Flesh and Blood: The Hammer Heritage of Horror (1994), plus Legend of Hammer Vampires (2008) and Legend of Hammer Mummies (2013). By contrast, Hammer Horror: The Warner Bros Years focuses not on the overall history of the studio but just on their collaborations with Warner Brothers, a total of seven films.

The collaboration with Warner Brothers grew out of Hammer’s partnership with Seven Arts in the early days. Seven Arts then acquired majority shareholder interest in Warners in 1967 and CEO Elliot Hyman became the head of the studio. This obviously benefitted Hammer in terms of greater production and promotion budgets.

The first film affected by the new arrangement was the fourth Dracula film Dracula Has Risen from the Grave (1968). The documentary devotes the most time of any of the films covered to this. We get everything from Veronica Carlson telling anecdotes about the weight of Christopher Lee’s cape to discussions of director Freddie Francis’s cinematographic style to a bunch of Hammer fans who have wandered around Black Park in Buckinghamshire and mapped out all the locations where the various shots took place. Joe Dante and others analyse the tongue-in-cheek promotional campaign that was conducted by a high-end advertising studio.

The documentary then moves on to Frankenstein Must Be Destroyed (1969) and how it became a considerable departure from the previous Frankenstein films and a turn for the darker. Much of the discussion centres on the infamous rape scene that exists in the American but not British prints. Veronica Carlson in particular tells how a handful of pages were delivered by studio head James Carreras (apparently at the behest of Warners) close to the end of shooting and how she, Peter Cushing and director Terence Fisher were all appalled at having to shoot them – Cushing even apologised to her after the scene was over.

Less time is spent on films such as Moon Zero Two (1969), Hammer’s much ridiculed Space Western (and in this author’s opinion an overlooked film), the psycho-thriller Crescendo (1970) and the prehistoric drama When Dinosaurs Ruled the Earth (1970). They are covered but not nearly as much as the rest of the entries. What does come out in discussion of these is how the Warners influence was turning the studio towards youth audiences – the inclusion of drug themes in Frankenstein Must Be Destroyed and Crescendo, the addition of much younger leads, and the attempt to set Dracula A.D. 1972 (1972) amid the era’s youth culture.

Thereafter, the Warners collaborations consisted of a series of Dracula sequels – Taste the Blood of Dracula (1970), Dracula A.D. 1972, The Satanic Rites of Dracula (1973) and The Legend of the 7 Golden Vampires (1974). Unmentioned is the one Dracula sequel sandwiched in there Scars of Dracula (1970), which was not co-produced with Warners and is not mentioned even in passing by the documentary. There is the interesting anecdote recounted about how James Carreras was reputed to call Christopher Lee up on an almost annual basis and beg for him to make another Dracula film, claiming the studio and crew’s finances all depended on him doing so.

Some analysis is spent on all four of these Dracula films. Taste is appreciated as one of the better sequels and there is much discussion about its themes of Dracula turning youths against their parents. A surprising degree of re-appreciation is offered for Dracula A.D. 1972 where Christopher Lee’s performance is said to be one as one of his best outings as Dracula to Caroline Munro’s defence of Alan Gibson, a usually dismissed director in the annals of Anglo-horror. There is also some praise for Satanic Rites and its’ totally off the wall plot, including the vivid metaphor of Dracula as a modern-day property developer. There is less time spent on the Lee-less 7 Golden Vampires where the Hong Kong co-production arrangement was apparently not a happy one for Hammer, including having to deal with the local crews who were used to the post-dubbing of dialogue and had no concept of “quiet on the set.” The film also fascinatingly unveils an unmade Hammer script called The Unquenchable Thirst of Dracula copyrighted 1977. This is praised for its handling of characterisations by those who have read and we get to see some scenes from a read-through that was staged at a film festival.

The demise of Hammer is seen as due to several things. One of these is the changing guard at Warner Brothers who lacked interest in the last two Dracula films, not even bothering to release them in the US, before shipping them off to other distributors several years after their UK release with different titles. Another is the success of Warners’ own The Exorcist (1973) and its in-your-face shock effect and contemporary setting after which Hammer was seen as too cosy and dated. The backing and guarantee of US distribution from Warners drying up simply meant that Hammer, after attempts to garner finance elsewhere, could no longer sustain themselves and closed up doors in the early 1980s.

Hammer Horror: The Warner Bros Years was the first full-length documentary from Marcus Hearn who has directed and produced dozens of other documentary shorts for dvd release extras of Hammer films, plus other assorted Anglo-horror films and tv’s Doctor Who (1963-89, 2005– ).