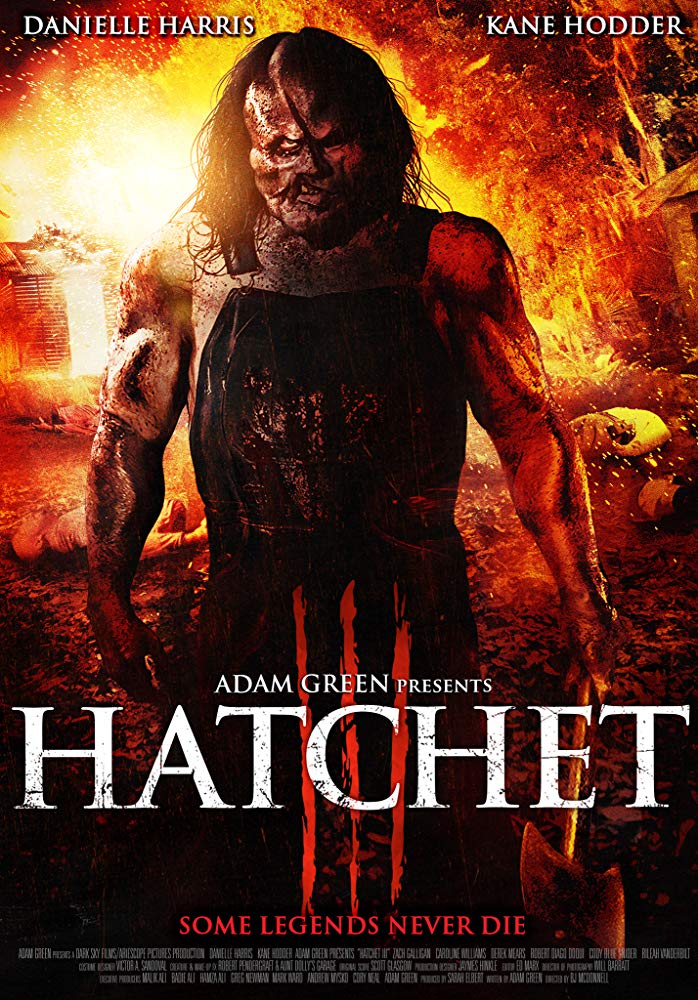 Surviving the second massacre in Honey Island Swamp, Marybeth Dunstan walks into a New Orleans police station covered in blood and carrying Victor Crowley’s scalp and a shotgun. She is immediately arrested. After she tells her story, Sheriff Fowler gathers a group of deputies to go and investigate what happened. Fowler’s ex-wife Amanda Perlman, a journalist who has written about the legend of Victor Crowley, pushes to get in to see Marybeth, demanding to know what happened. As the group of deputies start being slaughtered by Victor, who has been revived again by the voodoo curse, Amanda pushes a deputy to release Marybeth so that they can go and retrieve the ashes of Victor’s father, the only means of defeating Victor for good.

This is the third film in the Hatchet series. This began with Adam Green’s Hatchet (2006), a modest homage to the slasher film that was made with a sense of humour, a great many cameos from people with genre histories and buckets of gore. Hatchet launched Adam Green’s career and he returned to the series with Hatchet II (2010), which upped the number of cameos and pushed the gore envelope to an extreme that had the film banned in several places and heavily cut in others.

The series returns with its third entry here. Danielle Harris is back as Marybeth Dunstan and Kane Hodder again takes up the role of Victor Crowley. The only other returnee in the cast is Parry Shen who has played a different character in each of the Hatchet films. (Here this is spun out into a gag where they find the body of his character from the previous film and Shen dismisses Sean Whalen’s comment about “all of them [Asians] looking the same”). Adam Green again returns to write the script, although this time hands over direction to B.J. McDonnell, a regular camera and steadicam operator on various films who has worked on most of Green’s films to date.

I am not a huge fan of the Hatchet series. The first film had its amusement but the second upped the level of gore and genre cameos to the point they became the whole of the film and in the midst of doing so seemed to miss the first film’s sense of humour. Hatchet III is about the same as Hatchet II in this regard. It is neither a lesser nor a better film, just more of the same. Danielle Harris gets to push her range a little beyond what she did in the first film and spends this one in an angry and closed-off mood. She gets able support from Caroline Williams who carries off the role of the obsessed reporter rather well. Especially amusing is a cameo from Sid Haig as a cranky, aging redneck who is going deaf.

The plot serves up fairly much the same as before with the team of hunters from the previous film being replaced by a heavily-armed detachment of law enforcement officials. The film’s greatest development this time is the expansion out of the idea of Crowley as a Repeater, an idea introduced in the second film that has Crowley resurrected from the dead unharmed each day due to a voodoo curse, a rather amusing concept that gives appealing rationale to the basic premise that underlies almost all slasher series in the way they constantly resurrect their maniac of the show after they are killed in the preceding film.

As before, there is a great deal of horror genre in-referencing in the casting. Introduced to the show is Zach Galligan, once the youthful star of Gremlins (1984), as the sheriff; Caroline Williams who found attention as the heroine of The Texas Chainsaw Massacre 2 (1986) and has been a genre regular ever since; Derek Mears, a Hollywood stuntman who played Jason Voorhees in the remake of Friday the 13th (2009); the eye-patched Jason Trost, mostly known as a director of All Superheroes Must Die (2011); and Sid Haig, an actor with a long genre history who played in Spider Baby or, The Maddest Story Ever Told (1968) and found a career revival with Rob Zombie’s House of 1000 Corpses (2003) and sequels.

As before, the screen washes with splatter and gore. There is an extremely gory prologue where Danielle Harris carves Victor Crowley’s body up with a chainsaw. Elsewhere, Sean Whalen is ECTd until his head explodes, while Jason Trost gets his head cleaved in two with an axe; Cody Blue Snider has his arms torn off and face squished under a boot heel; Zach Galligan gets his head torn off through a hole in a door; Rileah Vanderbilt is reduced to a pile of guts on the floor; and the film climaxes on a very gory meltdown of Crowley once again.