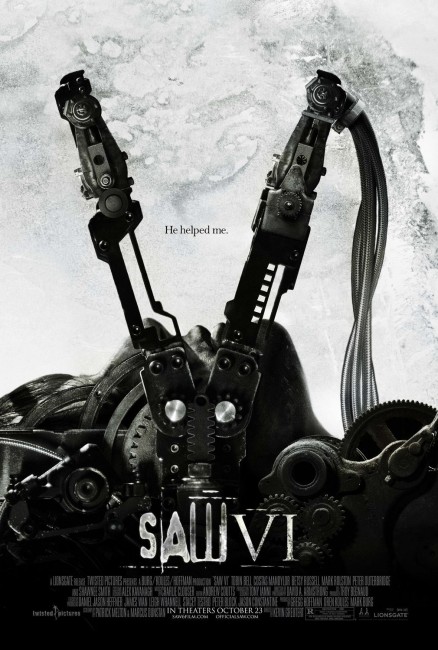 Detective-Lieutenant Hoffman continues about the business of placing victims in deadly traps on posthumous behalf of the Jigsaw Killer John Kramer. Hoffman learns about the box that was left to Kramer’s wife Jill Tuck in Kramer’s will and demands its contents from her, finding five envelopes that contain instructions for dealing with further victims. Hoffman then abducts William Easton, the CEO of the Umbrella Health medical insurance company, and places him in a series of traps to teach him about the consequences of the callous choices over life and death he regularly made in his job. At the same time as Easton progresses through the maze with one hour to save his family, FBI agents come close to uncovering Hoffman’s involvement in the Jigsaw killings.

The Saw series started superbly with Saw (2004), which is a genre classic by anybody’s standards. Thereafter – with Saw II (2005), Saw III (2006), Saw IV (2007) and Saw V (2008) – things started to go downhill. The Saw series has become something as predictable as the Friday the 13th films used to be – no more than a series of killings strung together. The Saw series at least has it over the Friday the 13th series in a number of essentials ways – it is far more driven by plot and contains an elaborate back continuity that stitches the series together, while it pushes the on-screen torture and mutilation of victims to what must be an all-time extreme.

Sitting down to watch Saw VI feels more like professional duty than anticipation. The plot stitching the series together (which still manages to star Tobin Bell’s John Kramer despite his having been killed off three films previously) has become so exceedingly complicated that I find myself confused trying to keep track of the various characters that keep popping up. Maybe one day the Saw producers will do something akin to what Francis Ford Coppola did with his Godfather films and edit everything into a single linear timeline so that one is able to make sense of the plotline and interwoven backstory driving the series. Right now though the Saw series feels akin to tv’s The X Files (1993-2002, 2016-8), which kept piling on so many twist revelations and story complications that it became an absurdly improbable house of cards built in mid-air. Naturally, Saw VI is not the end of the series, leaving its ending open for Saw 3D (2010). The other bugbear I have with the plot is its pointless twist ending where what we assume to be Peter Outerbridge’s relationship with the imprisoned mother and son is turned on its head – but in truth this is a twist that has only been inserted to play with our expectations rather than create what would logically be a surprise on the parts of the characters.

The torture scenes have been pushed to even more of an extreme for the series and expectedly Saw VI received the maximum censorship rating in just about every country it was released in. These are served up at regular intervals – Peter Outerbridge finding his co-workers trapped on a merry-go-round where he must make a choice which ones will be spared while the others have their heads blown off with shotguns; Costas Mandylor caught in a trap, ending up with what looks like one of his cheeks torn off; one character injected with syringes of hydrochloric acid that cause them to gruesomely melt down. The opening of the film features two people in a competition where the one who removes the greatest amount in weight of flesh from their bodies gets to go free. As you watch a fat man (Marty Moreau) slicing out sections of his stomach and a woman (Tanedra Howard) hacking off her wrist with a meat cleaver, the entire film starts to slip into the risible. You come out of Saw VI thinking it is all starting to seem passe by now – and then realise there must be something wrong when you have watched people being melted down, burned, hacked apart and having their heads blown off, and are starting to find it tedious.

What makes Saw VI somewhat more enjoyable than many of the preceding four films is its’ determination to make a social message about soulless business-people (an apt message for the 2008-9 Recession if there ever was one). The opening scene has two moneylenders being forced to cut a literal pound of flesh off from themselves as punishment for their usurious practices. The main thrust of the film is about Peter Outerbridge, the head of an American medical insurance company, being forced to confront the consequences of his company’s policies that included having a team hired to find hair-splitting reasons for cutting people’s coverage off. Try and imagine Saw VI as being a Torture Porn version of Michael Moore’s Sicko (2007) and it suddenly gains another entire level of black amusement.

Saw VI saw the entry of Kevin Greutert, previously an editor on all the other films in the series. Greutert went on to direct Saw 3D, followed by the original horror films Jessabelle (2014), Visions (2015) and Jackals (2017).