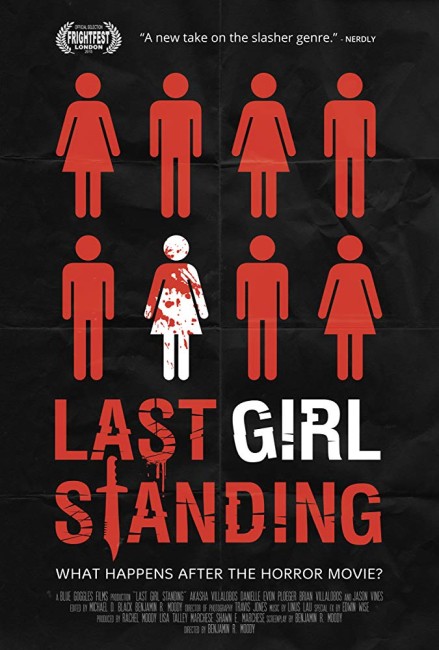 A group of friends were attacked and slaughtered by a masked killer known as The Hunter while in the Texas backwoods. Camryn was able to kill The Hunter and emerged as the sole survivor. Five years later. Camryn is working a nowhere job in a dry cleaning firm. She is suffering from post-traumatic flashbacks and thinks she sees The Hunter reappearing everywhere. She is befriended by Nick, the new teller at work. When she thinks that The Hunter has broken in and is pursuing her, Nick offers for her to come back to stay at his place. There he introduces her to his circle of friends and roommates. As Camryn starts to make new friends amongst them and an attraction develops between her and Nick, she becomes certain that The Hunter is still alive and is planning to kill everybody.

Last Girl Standing is the debut film for Benjamin R. Moody who had previously made a host of short films for various online outlets.

2015 saw some astonishing variants on the slasher film with the likes of Final Girl (2015) and The Final Girls (2015), as well as Lost After Dark (2015), which can be considered more of an affectioate homage. To this can also be added Last Girl Standing, which you suspect had to settle for the title it did because another ‘final girl’ titled film would have been far too confusing. While the original slasher films of the 1980s were no more than B movies made with a lack of sophistication, these have taken the basics of the slasher movie in sophisticated directions and explored in some depth the one-dimensional characters we were given in the originals. Final Girl showed the final girl turning the tables on her attackers and becoming more hunter than victim, while The Final Girls injected modern characters into a slasher scenario to puncture the cliches with invigorating results.

Last Girl Standing‘s approach is to ask what happened to the final girl in the aftermath of the massacre. This has never been something that slasher films have concerned themselves with unless it has only been to lead to her reappearance in the sequel as in the likes of Friday the 13th Part 2 (1981), A Nightmare on Elm Street Part III: The Dream Warriors (1987) or the Scream series where she usually gets a token scene where she is seen as someone shell-shocked before having to go through it all again. Last Girl Standing is maybe the first slasher film to take it into the realm of real-world psychology, showing the massacre in the opening scene and the rest of the film being about Akasha Villalobos in a traumatised state imagining the return of the killer at every turn.

On the other hand, you do wonder how this stands up as drama. With the most dramatic aspect of the film over and done with in the opening scene, the rest of the film feels like a long anti-climax with Akasha Villalobos merely reacting to past events as opposed to actually being stalked. What we have is not a slasher film so much as a work about post-traumatic stress disorder. As much of the film is centred around Akasha’s mundane day-to-day life, you wonder where it has to go dramatically.

All of that said, Benjamin R. Moody does not disappoint us. The film plays a long game in lulling us into the mundane dramatics of its work about post-traumatic stress. It saves its punches and unleashes them right at the end with some effect. [PLOT SPOILERS]. Here the film conducts a jaw-dropping reversal of our sympathies that is as effective as any of the contrived left field reversals that have affected the horror film in recent years. You have to commend Moody in the bravery of opting for such a twist. It is a perfectly logical one when it becomes apparent – when you think back, you can spot all the clues leading up to it and hit yourself for not working out that that was where it was leading. The film also goes out with a grim ending that echoes the start of the film where you can see that everything is destined to happen all over again.