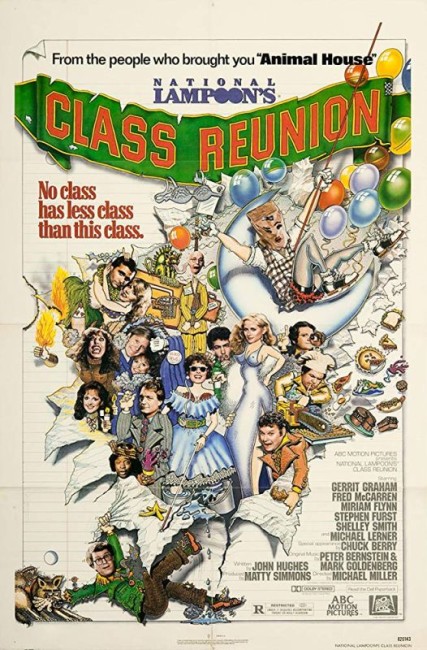 It is the graduation party for the students of Class of 1972 at Lizzie Borden High School. Class president Bob Spinnaker sets nerdy Walter Baylor up with a girl whose face is hidden beneath a paper bag, telling Walter that it is the highly popular Meredith Modess. Instead, what he sees when he takes the bag off causes Walter to snap. In the present-day, the same class hold their ten-year reunion back at the school. The festivities are interrupted by the warder of the state asylum who explains that Walter has escaped. As someone starts slaughtering the partygoers, they realise that Walter has come seeking revenge, disguised as someone among the group.

National Lampoon (1970-98) was the satirical American magazine, contrived with a sense of deeply black and offensive humour that it became a major institution during its heyday of the 1970s and early 80s. This was spun off into live theatre and records, which brought to prominence many names like Chevy Chase, Bill Murray, Harold Ramis and especially John Belushi.

National Lampoon’s Class Reunion takes as its target the slasher films that were at their height around the period 1981-3, following the successes of Halloween (1978) and Friday the 13th (1980). A number of other films around the same time – Saturday the 14th (1981), Student Bodies (1981), Pandemonium/Thursday the 12th (1982) – also attempted to parody the slasher film. In all of these cases, the results were never particularly funny – and of all of these spoofs National Lampoon’s Class Reunion is probably the most witless and feeble. There are a few gags aimed at horror movies – like the perpetually over-the-top Zane Busby as a devil-worshipping psychic student who has a tendency to breathe flame and Jim Staahl as a Transylvanian exchange student who is naturally vampirically inclined. Little is ever done to dig at the numerous cliches of the slasher film. Perhaps the most notable distinction that National Lampoon’s Class Reunion has is in being the first slasher film to offer redemption to its psycho at the end.

In terms of general comedy, Class Reunion arrives at the party with all the social decorum of the class misfit it turns into the butt of its pratfalls. There is a great deal of yelling and people crack jokes that one feels should have been funny. Gerrit Graham plays loudly in a role that can imagine was originally written with John Belushi (who had just died) in mind. However, the reunion has a sad air of forcedness about it from beginning to end. Most of the film is plotless – nothing much ever happens. The production appears to have cut costs by shooting on the grounds of a school that was awaiting a demolition order.

Director Michael Miller has mostly worked in tv but at the time was known for action films like Jackson County Jail (1976) and Silent Rage (1982), which featured Chuck Norris battling a cyborg killer. Class Reunion was also the first screen credit of John Hughes who started as an article writer for National Lampoon and became famous as producer and/or director of a series of teen angst films that largely defined the 1980s with the likes The Breakfast Club (1985), Weird Science (1985), Ferris Bueller’s Day Off (1986) and Pretty in Pink (1986), as well as produced the hit of Home Alone (1990).