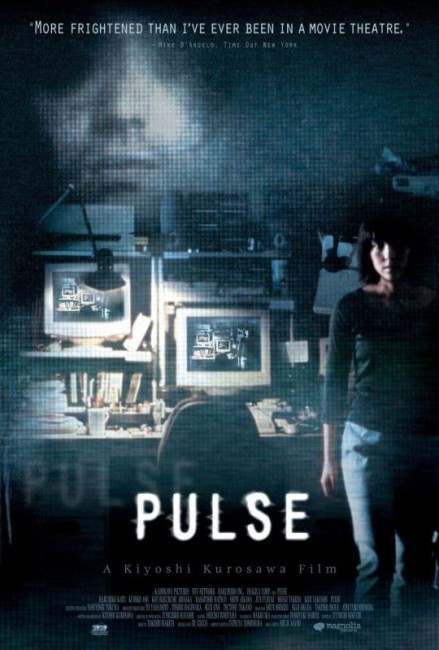 Michi Kudo has not heard from her friend Taguchi for several days and goes to his apartment to pick up a computer disk. Taguchi comes and talks to her but then she enters a room to find his dead body hanging. Afterwards, she and her friends puzzle over the computer disk, which shows cryptic pictures of Taguchi and his apartment. In very short time, Michi and her friends are seeing ghosts everywhere, including on the internet.

Japan’s Kiyoshi Kurosawa has developed a minor cult reputation. Kiyoshi Kurosawa emerged in the 1990s as director of films like Cure (1997), Charisma (1999) and Seance (2000), most of which fall into the horror genre, before the critically acclaimed Tokyo Sonata (2008). All of Kurosawa’s films are enigmatic and unfathomable as to what is going on. In some regards, Kiyoshi Kurosawa is like the latter day David Lynch around the period of films like Lost Highway (1997) and Mulholland Dr. (2001).

Kiyoshi Kurosawa’s films have never been what one might call mainstream. However, Pulse – no relation to the obscure electrical appliances amok film Pulse (1988) – was the greatest success that Kurosawa has had to that point. Pulse was Kurosawa’s biggest box-office hit and also the film that made the greatest nods towards current commercial trends. In this case, Pulse was clearly inspired by the massive success of Ring (1998) with Kurosawa substituting haunted computer disks and internet sites in lieu of Ring‘s haunted tv broadcasts and videotapes. The measure of Pulse‘s success is surely that Hollywood ended up remaking it as Pulse (2006), which led to two sequels with Pulse 2: Afterlife (2008) and Pulse 3 (2008).

Kiyoshi Kurosawa creates an incredibly haunted atmosphere in the film. The stage is set perfectly during the eerie opening scene where Kumiko Aso enters Taguchi’s apartment and he greets and talks to her and then vanishes into the next room, before she follows him through only to find his body hanging. One of the most intensely haunted scenes in the entire film is where Haruhiko Kato enters the red-tape room and the mystery woman appears, moving across the floor towards him in a strangely stumbling, unnatural gait and then abruptly appears over the top of the couch as he hides underneath. Another equally fine scene is the one where Haruhiko Kato is trapped in the Forbidden Room at the end and the blurred-out figure of a ghost appears to him.

There are some dazzlingly original ideas to the film. The scenes where the character played by Koyuki explains the nature of ghosts as a metaphor for loneliness and says that there is no difference between those who are alone and those who are dead is truly striking. So too the scenes where she tells us that ghosts want people to stay alive rather than commit suicide because the afterlife is too overcrowded. It is here that Kiyoshi Kurosawa seems on the verge of conducting something uniquely new with the ghost story.

However, all of this has to vie with a high degree of frustration about the film. As is the usual case with his films, Kiyoshi Kurosawa gives us a plot that is so murky and impenetrable it is frequently hard to decipher what is going on. People do things like kill themselves for reasons that are never clear. There are a number of questions left unanswered at the end of the film. One could buy the notion of ghosts somehow entering the world, but what are the dead doing on the internet or trapped inside people’s photographs? What is the significance of the red tape that has to be placed around doorways? For some reason, the last ten minutes of the film turn into a social apocalypse with Haruhiko Kato and Kumiko Aso driving through a deserted city past burning vehicles and then a plane that comes crashing down into a building, while the wraparound fadeout gives the impression that the entire population of the world has vanished or become ghosts (exactly what is not particularly clear). Nevertheless, what Pulse does offer is a great deal of haunted atmosphere, which almost compensates for total confusion about what is happening.

Kiyoshi Kurosawa’s other films of genre interest are:– the haunted house film Sweet Home (1989); the psycho film Guard from the Underground (1992); Cure (1997) about cryptic hypnotism murders; Serpent’s Path (1997) and Eyes of the Spider (1998), a duo of studies in obsessive revenge; the medium thriller Seance (2000); Bright Future (2003), a strangely unfathomable film about two frustrated workers and jellyfish amok; Doppelganger (2003) about an overworked man being helped out by a mysterious double; the ghost story/mummy film Loft (2005); the ghost story Retribution (2006); the dreamscape film Real (2013); the ghost story Daguerreotype (2016); and the alien invasion film Before We Vanish (2017) and its follow-ups the mini-series Yocho (Foreboding) (2017) and film Yocho (2017).